Origins of the New Left 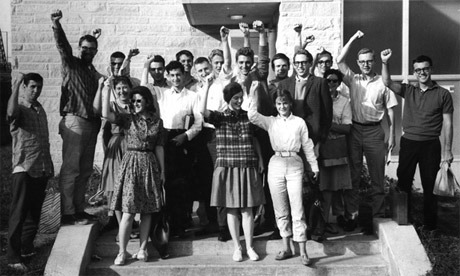 Members of Students for a Democratic Society at National Council Meeting, 1963

In the 1960s an organization called Students for a Democractic Society (SDS) became prominent both at the University of Michigan campus in Ann Arbor and across the nation. SDS quickly became a voice of the students. Filled with heady ideas of political education, participation, and discourse, students saw the university as a site where meaningful political and social change can, and should, happen. Inspired by the Civil Rights Movement of the 1950's and the 1960's, as well as by the Student Nonviolent Coordinating Committee (SNCC), students sought to exercise their rights as full citizens and affect their country. SDS combined intellectual debate with direct action, analyzing the world around them outside of the typical Cold War bipolar view, identifying problems with the world and in the community, drawing up a course of action to address critical issues and then actively pursuing fixes to these problems. Due to its elegant, appealing philosophy and practices, SDS became the core of the New Left, the loose organzation of political movements that advocated for democracy, civil rights, university reforms, and protested the Vietnam War.  In the Port Huron Statement, SDS crystallized their platform, offering substantial critiques of society as well as creating the foundation for the Anti-Vietnam War Movement.  SDS also created programs that were meant to address poverty and other social problems, like the Economic Research and Action Program (ERAP).  The first step of fixing a problem is understanding it, and so to address the lack of knowledge about Vietnam in the United States, SDS createdThe Peace Research and Education Project (PREP).

Students for a Democratic Society →
Origins of the New Left