The Making of History (by Christopher White) 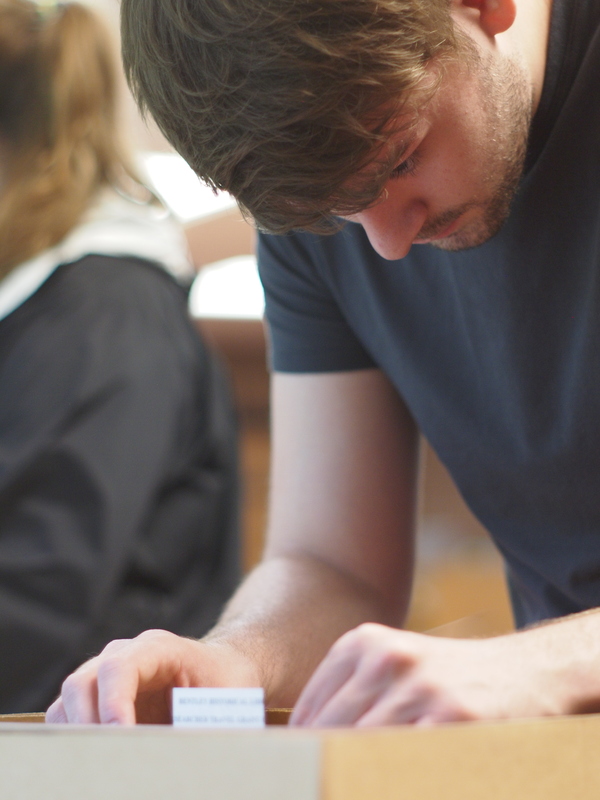 After my first week of working inside Michigan’s Bentley Library, digging through old correspondences, diary entries, newspaper clippings, drawings, and telegrams, I’ve found that the work of a historian can be much more intimate than I had ever previously imagined. Typically, I’ve thought of history as a study of books and official documents, mere copies of an original work far too elusive or rare to ever enter my possession. Rarely (if ever) have I had the chance to work with original documents. At the Bentley, the papers of the diaries have turned yellow with age and brittle on the edges, and I can see the indentations of pen on paper. I’ve found personal memorabilia, such as chevrons from war service, graduation books, photo albums, and more postcards than I could count. Last week, my workspace was littered with tiny yellow scraps of paper that had fallen off the edges of correspondences from a particular large and messy folder. Yet the folder belonged to none other than the founder and first president of Hudson Motors, Roy Dikeman Chapin, and the brittle paper from letters to president Wilson and former president Taft regarding the construction of Lincoln Highway, America’s first transcontinental road. There I was, rifling through original letters and documents vital to the nation’s history.

The question I often found myself asking then, was how to gleam history out of these old papers and photos in a meaningful way. What was I looking for? Unlike most of the historical work I’ve done in the past, where the main arguments and key points are neatly laid out in the introduction and at the beginning and end of each chapter, finding the “key points” out of hundreds of diary entries was considerably more difficult. First of all, “importance” becomes considerably more subjective when dealing with primary documents. Any document may be important for a variety of reasons, including its relevance to a historian’s study, its prominence and location in the archived box or folder, its personal importance to its author, and even the impression it leaves upon the historian. For example, while I might be most interested in Chapin’s letters to the War Administration concerning war preparedness and war relief, the folder featured his letters to the president concerning the Lincoln Highway, Chapin may have prioritized the personal correspondences to his wife, all the while my mind was still lingering on the stunning photos I had seen in the previous folder. Reconciling all of this is quite intimidating. Clearly, the work of a historian is much more complicated than I had previously thought, and considerably more intimate. One day at the archives looking through diary entries is more than enough to feel a close connection to not only a particular Great War soldier, but perhaps also the needs and concerns of that soldier’s mother, to whom he often wrote. I would have never imagined that I could feel so personally connected to the mother of a soldier that fought almost one-hundred years ago and whose life seems so insignificant to the greater scope of history, but all too significant to me.

Perhaps, any given “person” I’ve met at the archives holds historical significance as well. All I have to do is write about them and tell their story. This is how a historian engages in deeply personal work: by lending a moment in the annals of history to those who have only existed inside folders, diaries, letters, and forgotten memories.