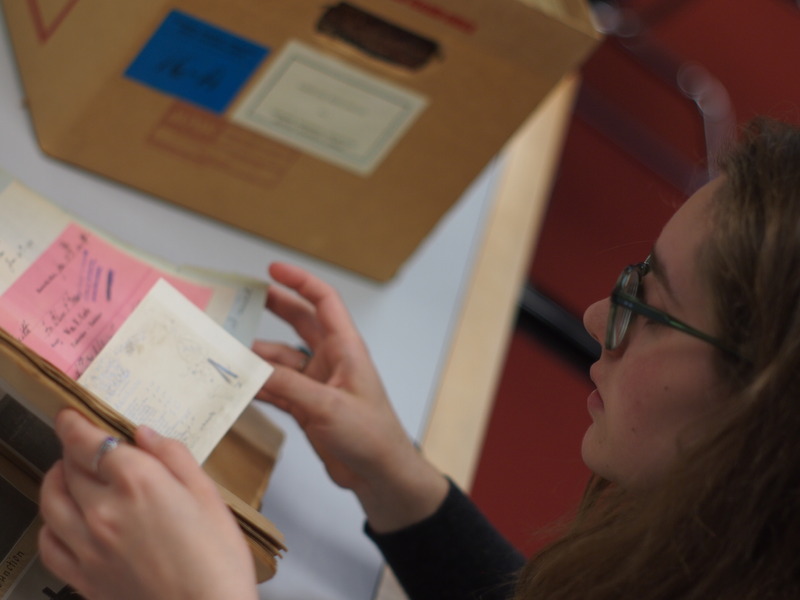 I’ve spent the first week and a half of my research tracking the wartime lives of two individuals through the letters, scrapbooks, and miscellanea collected and stored in their personal papers. The first is Carl Schmidt, a prominent Detroit industrialist of German extraction and self-proclaimed voice of the local German-American community. Schmidt was approaching 60 years old when the war started; he was wealthy, and socially well-established; and he was able to use his considerable influence to spend the early years of the war vehemently campaigning against American entry on both local and national scales. The second individual is Harold Gray, a teenager and student at Harvard at the moment war in Europe broke out. He left school for England in 1916 as a YMCA volunteer at camps for German POWs; when he returned to the United States following the latter’s entry into the war, he registered as a conscientious objector and spent the remainder of the war (and some years afterwards) interned in various military camps and prisons. Getting to know these two extremely dissimilar individuals by following the courses of their fascinating lives during the conflict and after has given this project an unusual start for me, framing the war and the antiwar activities of those who lived through it in unexpected and startling ways.

Carl Schmidt’s papers quickly became fascinating because of Schmidt’s peculiar context, summarized above, as an antiwar activist in the years 1914-1917, and because of his unusual and impressive personal background. But his collection of scrapbooks, compiled throughout the course of his life, introduced him much more personally. It is through these scrapbooks that I slowly and tentatively began to acquaint myself with Schmidt and his character and got a sense of his personal style and artistic bent. The scrapbooks themselves are beautiful. Newspaper articles, letters, and other written documents are pasted in alongside bits of poetry, small sketches, personal notes, found images. Schmidt is interesting precisely because of his evasiveness; the infrequency with which any of his actual writing shows up in his scrapbooks leaves the reader with the task of assessing his personality, allegiances and activities based on indirect snippets. It was not through his personal writings, nor through these small, disconnected pieces themselves, that Schmidt’s character emerged; rather, it was through the selection and compositing of these puzzle pieces that I slowly figured out who he was.

Harold Gray’s records confront one in a very different manner. While I got to understand Schmidt through an impressive array of hints—strange juxtapositions of images, statements made in poetry or visuals rather than in words—Harold’s writings confronted me with his emphatic and eager personality from the very beginning. The letters to and from his family and the drafts of his various written works introduce him in a much more intimate setting than that in which Schmidt’s scrapbooks present him. Arguments between him and his father on the value of conscientious objection and letters to his mother describing his emotional and physical state at Fort Riley are set beside speeches on religion, politics, and philosophy he spent months meticulously crafting, rewriting, and building upon.

In both cases, the most powerful part of watching Schmidt and Harold as their lives unfold has been witnessing—in dizzying fast-forward mode—their own personal transformations throughout the course of the war. From folder to folder, Harold Gray gradually radicalizes as his life in camps for conscientious objectors progresses. He begins to envision himself more and more as a martyr, and his views of the U.S. government go from fairly standard to almost conspiratorial. Meanwhile, Carl Schmidt goes from idealistic patriot to heavily disillusioned cynic, perceiving himself as a social pariah in the wake of anti-German mania surrounding the war.

Witnessing these transformations, accessible only in highlights, in extremely compacted form, has made me feel a fair amount of empathy with both of these characters. At times during my reading, I began to perceive hostile responses in myself to the people they mark as their enemies. Simultaneously, I experienced pride on their behalf, as Carl Schmidt’s name appeared again and again in the local newspapers and Harold Gray and his various friends—Evan Thomas, Howard Moore—turned up in the secondary material written decades after his death. To be honest, I’m sort of shocked to discover these responses in myself, and wonder if they have the potential to be damaging to my research. But they’re hardly surprising.

In particular, reading Harold’s files allowed me to watch this person—whose background, upbringing, age, and even, to a certain extent, personal philosophies, are similar to my own—work through his own ideas on morality and develop his political identity. It’s a process whose immediacy and urgency I (along with any other second-year undergraduate on the planet) completely understand, yet which in Harold’s case would and did directly determine what would happen to him. Reading Harold’s papers allowed me to develop a surprising amount of respect for and kinship with this individual. His discussions with his family remind me of mine. So does his academic process—he cuts and pastes bits of one essay into another, reworking one thought a little bit here, borrowing more powerful phrases in unconscious or deliberate repetition. The vehemence with which he conveys his thoughts seems to depend upon the particular mood he’s in at the moment he’s writing. To be honest, I’ve begun to feel a little inspired by Harold Gray. Perhaps even felt a bit challenged, personally, by the choices he made when confronted with certain situations. This might be getting a little maudlin—so suffice to say that reading his thoughts on pacifism has given me a fair amount to think about.