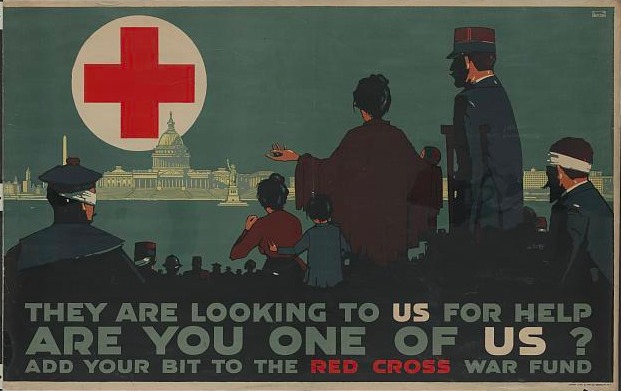 This part of the home front exhibit focuses on activities aimed at providing material comforts and aid to those experiencing war first-hand: civilians as well as soldiers. It is divided into three sections:

This first section, International Humanitarian Aid, presents our findings in regards to locally organized efforts to alleviate civilian suffering abroad. Historians long have argued that the totalizing nature of World War I blurred the lines between the battlefront and the home front. Not only because the war eventually demanded the complete mobilization of both military and civilian resources, but also because civilians became targets of military attacks, genocide, and economic blockades. Indeed, countless civilian men, women, and children were forced to flee their homes or be caught amidst battles, sieges, occupations, and genocidal massacres. In light of civilian suffering, international actors and agencies rallied to raise funds and materials for those caught in the cauldrons of war. In the United States, humanitarian relief became a sustained effort long before the country entered the Great War in April of 1917 and often for years after it ended. The underlying motives of American humanitarian aid have been a hotly debated issue among scholars in the field. Some arguing that international aid while feeding and clothing refugees and orphans was simultaneously promoting American political and social agendas. While this is an important discussion, we are here interested in the process of local mobilization, which complicates the perception of humanitarian relief as emblematic of an overall unified patriotic home front, willing to sacrifice for those suffering from the Central Powers' war action.

Our research has shown that on the one hand, students, faculty and alumni of the University of Michigan took note of these efforts and rallied to 'do their bit.' The student paper The Michigan Daily was filled with advertisements for different relief efforts beginning in the fall of 1914. The Belgian, Polish, and Armenian Relief efforts were particularly pronounced on campus in 1914 and 1915, as students planned charity concerts, canvassed the neighborhoods and raised awareness of the intense need abroad. The involvement in these earlier efforts facilitated the systematic organization of relief after the United States’ officially entered the war. One of the best-known fundraising efforts was the Dollar-a-Month Club, organized by Michigan faculty and townspeople in February of 1917 to aid Belgian children in particular.   On the other hand, we found that despite unprecedented and staggering dollar amounts shipped abroad, which suggests mass involvement, a close look at the local level shows that motivating Americans was not always easy. For example, repeated complaints in The Michigan Daily mentioned a general lack of dedication on the part of the student body if not complete apathy. Many articles discussing the canvassing of Ann Arbor neighborhoods for donations were backed by those who were unafraid to confront their lackluster compatriots and demand a stronger involvement. The subsequent discussions within the various sections will draw attention to the processes of local mobilization for international relief highlighting questions of patriotism, gendered participation and contributions of local efforts to larger state and national efforts. 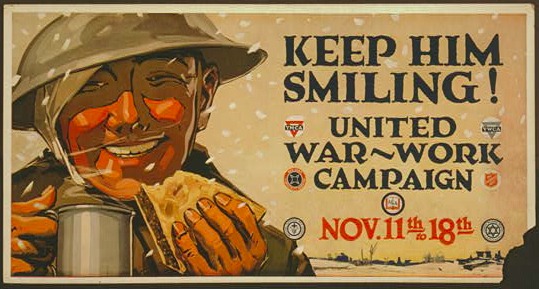 One of the many posters used by the Y.M.C.A. and others to raise funds on the American home front.

The second and third sections of this exhibit focus on activities aimed at providing support to American troops abroad. They explore the work of local actors, who worked as members or contributors to national organizations, such as the American Red Cross (ARC) and the Young Men’s Christian Association (Y.M.C.A.). Their goals included organizing fundraising campaigns, compiling comfort bags for troops, cutting and rolling bandages, etc.  Countless posters and written requests on behalf of the many organizations littered the national news, appealing to the hearts of Americans to remember soldiers on the front.  The funds would be used to finance the travel and work of doctors, nurses, and hospital representatives and staff to volunteer in hospitals throughout France.  We found that the University of Michigan and the Ann Arbor community were contributors to these efforts.  Both students and Ann Arbor citizens alike volunteered their time to fundraising, propagate ARC membership drives and committed to small sacrifices to contribute to the national efforts. These efforts are explored in both the American Red Cross and War Relief and the Other Organizations pages.