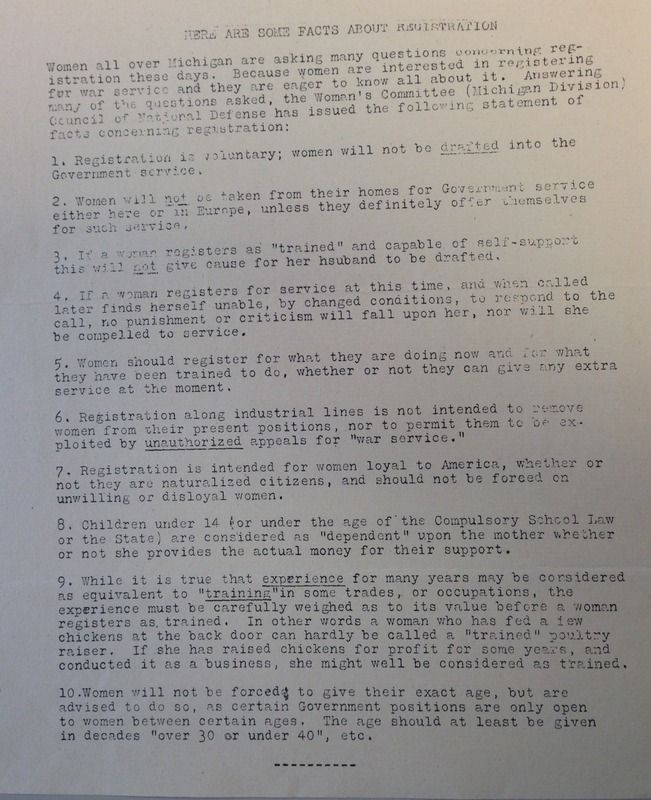 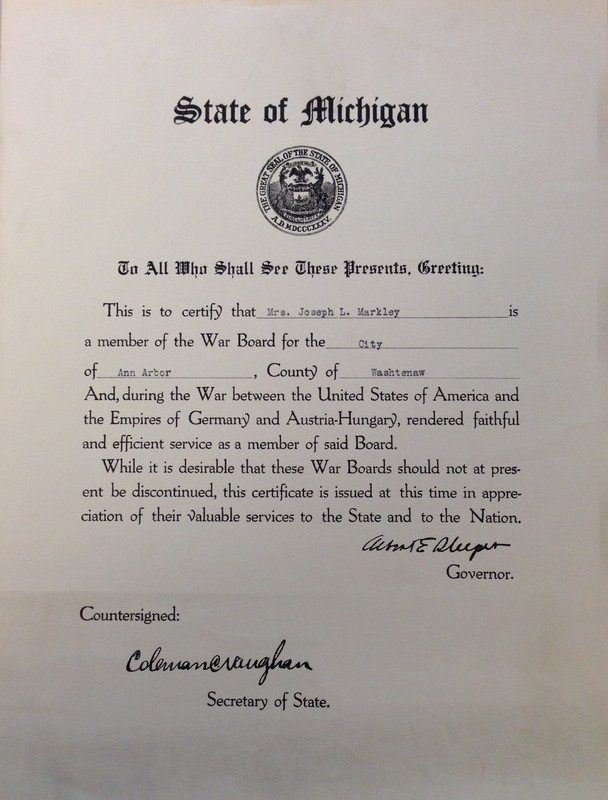 Mary Markley served on the War Board of the City of Ann Arbor.

In addition to rallying around international humanitarian relief, volunteering with the Red Cross abroad, and contributing to the comfort of soldiers in the trenches, the State of Michigan was the site of significant civilian mobilization.  The State of Michigan responded quickly to the national call to war.  Michigan State Senate Bill no. 328, soon Act. no. 97 of the Public Acts of 1917, established a fund of $5,000,000 to be borrowed from the state to establish "for the purpose of repelling invasion and defending the State and nation in time of war against all enemies and opposers whatsoever" [1]. This fund lead to the formation of the Michigan War Preparedness Board, tasked with the management of War Support, including food preparedness, fuel management, local labor distribution, as well as the oversight of state-based military groups.  The War Preparedness Board was very effective in organizing the State to the war effort, though it was an incredible undertaking.  To assist in accomplishing their goals, Governor Albert E. Sleeper established the Michigan Division of the Council of National Defense’s Women’s Committee in July of 1917.  The Women's Division of the Council of National Defense contributed to the war preparedness efforts by having “all women’s national organizations, all women’s state organizations in each state, all women’s city or county organizations in each city and county... work together in a unity of purpose and an effectiveness of effort such as never had been dreamed of before” [1].

To be effective, the women of the state first needed to be registered. Elizabeth A. Perkins, the general assistant to the State Chairman and Director of Registration, coordinated the registration about 900,000 women in eighty two counties.  The registration work was described as “one of the most important and definite pieces of work given to the Committee.” Some counties in Michigan reported “an actual 100 per cent registration” of all women over the age of sixteen [2].  In fact, in A History of the Work of the Women’s Committee, Caroline Bartlett Crane asserts “the number of registrants in Michigan greatly exceeded those reported from any other state in the Union,” a fact that, even if found to be hyperbolic, speaks to the dedication of both the committee and the citizens to do their part for the war effort [3]. 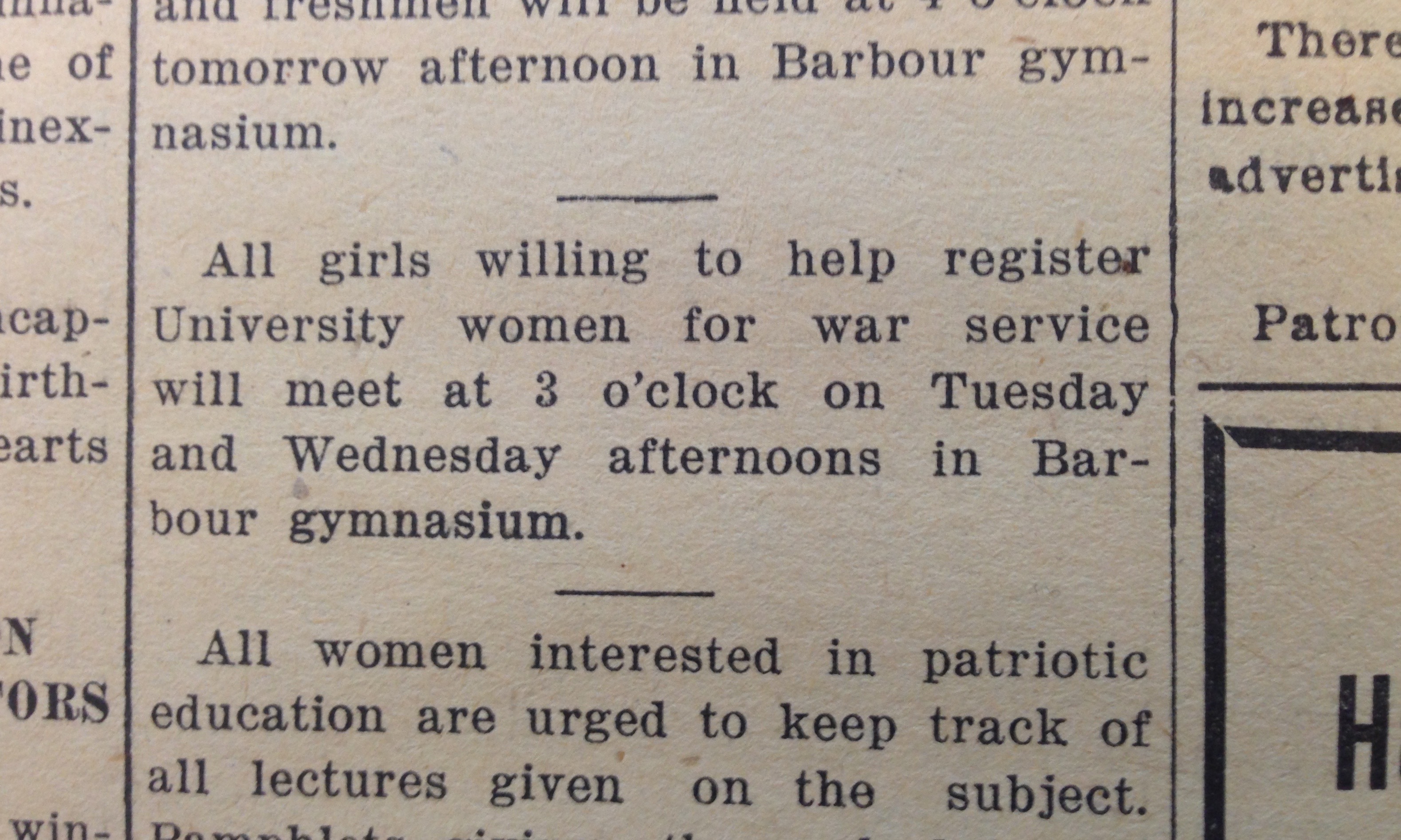 The topic of female registration was addressed repeatedly in The Michigan Daily during the 1917-1918 school year as classes on registration were held across Ann Arbor.  Michigan students and University women joined the cause.  The first registration conference for Washtenaw County was held in Ann Arbor in late February of 1918 to accommodate the senior women of the University who took charge of the registration of the college women during the week of March 18th. A total of 800 women registered.  In March and April of 1918, the women of Ann Arbor were hard at work giving practice hours in registration, crating “four minute speeches, making posters” and participating in registration drills [4]. 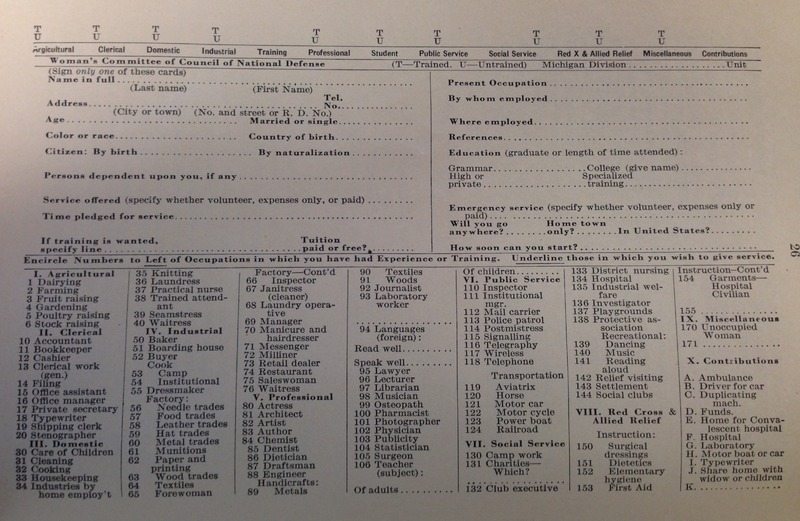 Example registration card for all Michigan women over the age of 16.

During the registration the Committee divided the work according to person’s different resources and strengths. Committee volunteers interviewed women in twenty to thirty minute interviews to determine amount of time and resources the women of Washtenaw county could spare for the war effort. The large majority of women could not volunteer full time to replace lost workers as they had other important duties as mothers and housewives. Hence, many checked the registration card’s option “care of children in the home.” The Women’s Committee reminded each woman who identified as a housewive that her work too made her “an important person in the eyes of her Government as one who was able to give highly valuable trained, specialized service in this crisis of world war” [5]. Other women volunteered in one of the other 188 options suggested by the Committee.  These options ranged within areas of agriculture, clerical work, industrial work, professional work, and education.  Women could also choose to contribute to social services or Red Cross and Allied Relief work. 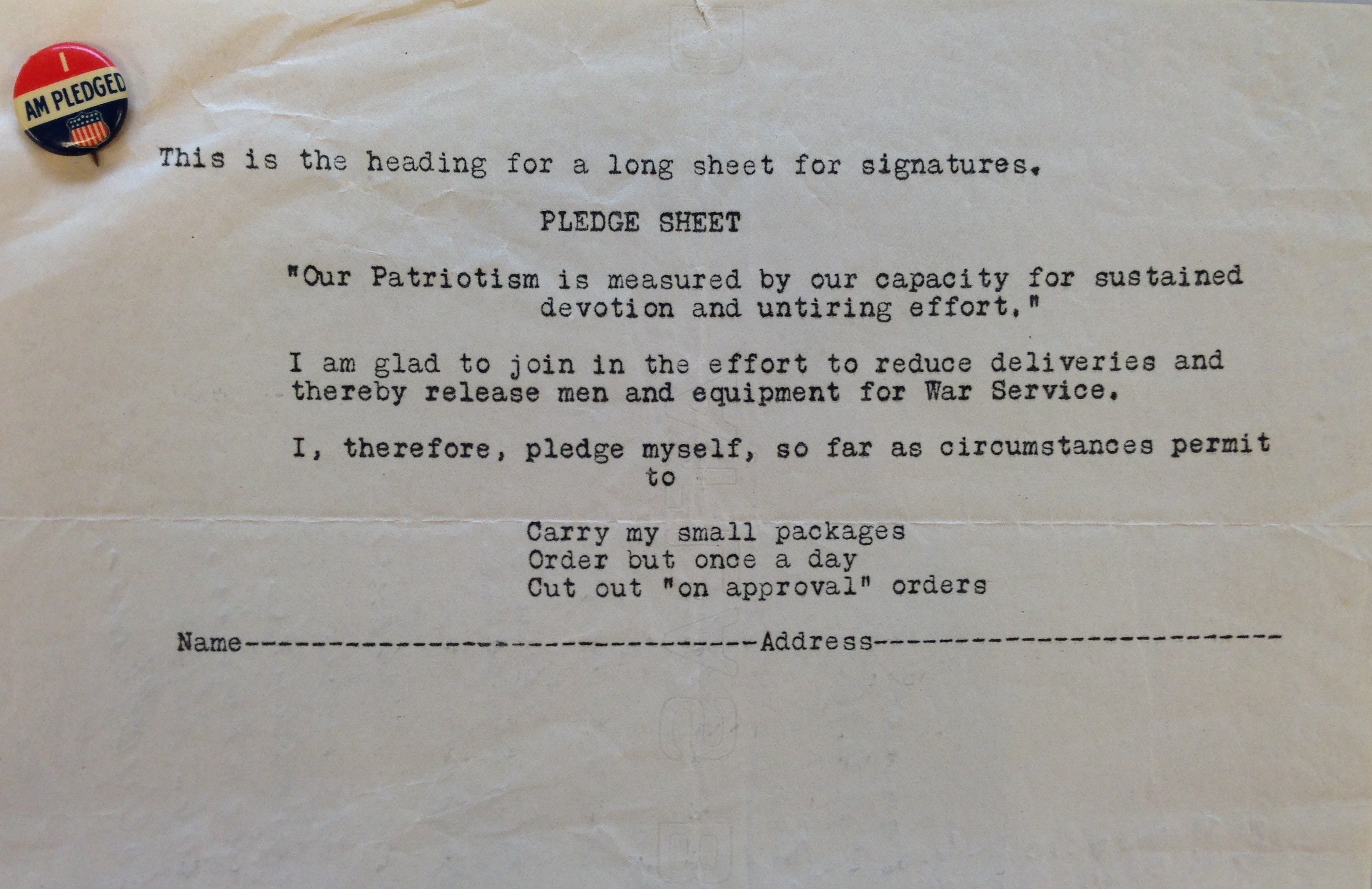 Women were encouraged by the Committee to make small sacrifices in their daily life for the good of the war effort.  Some of these sacrifices were community wide initiatives, such as meatless or wheatless days.  Other sacrifices were focused on day to day personal choices.  One example of a promoted sacrifice was the reduction of the work of delivery boys so that their work could be diverted to the war effort.  Michigan, by the end of the campaign to secure signatures of housewives to food pledges, had more than any other state [6]. By bringing patriotism into the home, the Women's Committee ensured the war effort was never far from Michigander's minds. 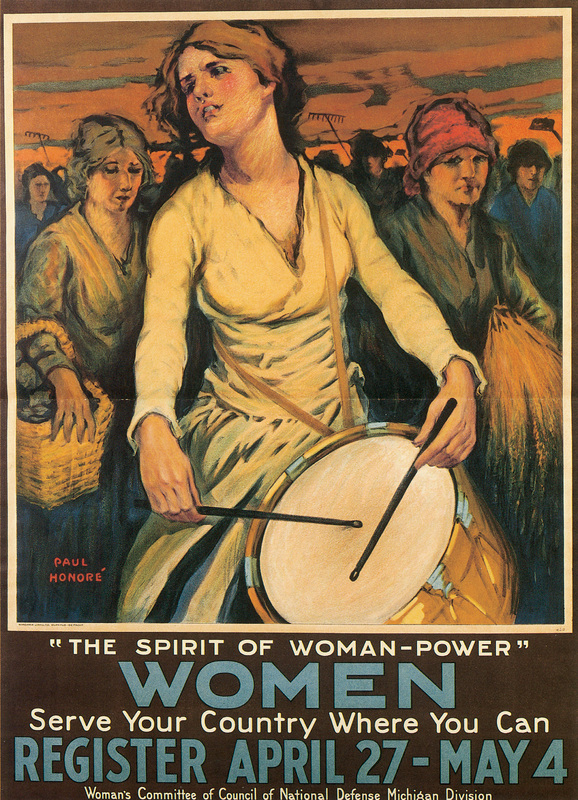 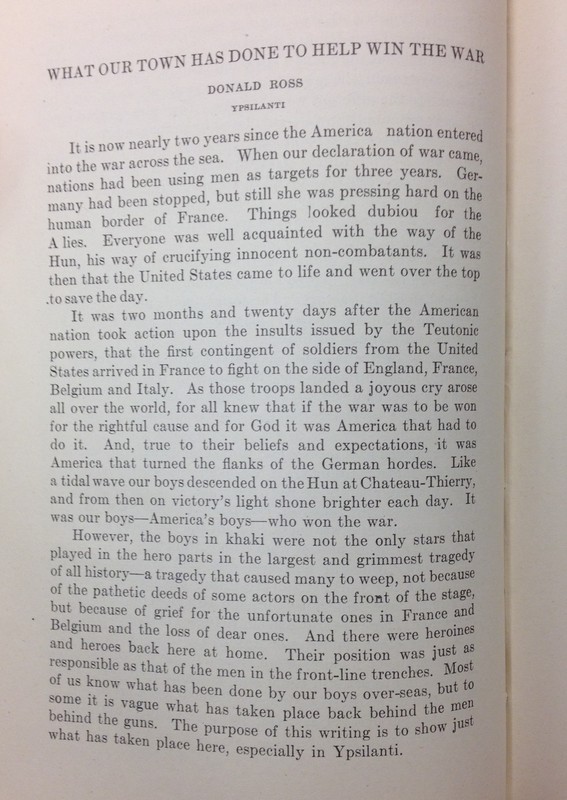 Prize winning essay from Ypsilanti student written during the war.

The chairman of Registration Publicity for the Women’s Committee, Mrs. Mina Humphry held a competition amongst the best artists of the City of Detroit to craft an official poster for the Women’s Committee that would inspire women to do their bit on the home front and capture the spirit of female volunteers.  Paul Honore won the competition, and his “Spirit of Woman Power” was displayed on Woodward Avenue in downtown Detroit during the registration, even as 10,000 copies of the painting were printed and circulated in Michigan [6].   Additionally, Pruella Janet Sherman of Detroit published a poem printed on the eve of the official registration drives.  The closing stanza reads:

“Columbia calls her daughters
To take the burden up;
Make strong their hands for labor,
To drain the toil-filled cup.
Our men are marching from us,
With courage high and fine;
Let there be no women slackers-
‘All on the firing line.”  [7]

By utilizing local artists to encourage feelings of sympahty and patriotism in those on the homefront, the Women's Committee effectively drew volunteers to the war cause and mobilized a significant portion of the remaining population to war work.

Women’s Committee also mobilized the youth of Ann Arbor. With the cooperation of Ann Arbor teachers, children were assigned to task that would promote registration. The children engaged in “essay-writing and speech making, making blackboard mottoes and window cards for school and home; writing invitations to mothers and friends to register; servicing in squads for telephoning women about registration, and distributing dodgers to homes; making cut-out or crayon posters illustrating the various services women can register for; holding contests between rooms and between different schools as to the largest percentage of mothers and big sisters registered; making paper “Registered for Service” flags with a star for each registrant to hang in home windows...” [8] Moreover, Children’s drawings were used to illustrate “A Patriotic Mother Goose” which allegedly became so popular that it was distributed in other states through the National Women’s Committee [9]. One of the areas in which the Women’s Committee was particularly active was food preservation and food conservation (Click Here for more on this topic).