Campus After the War 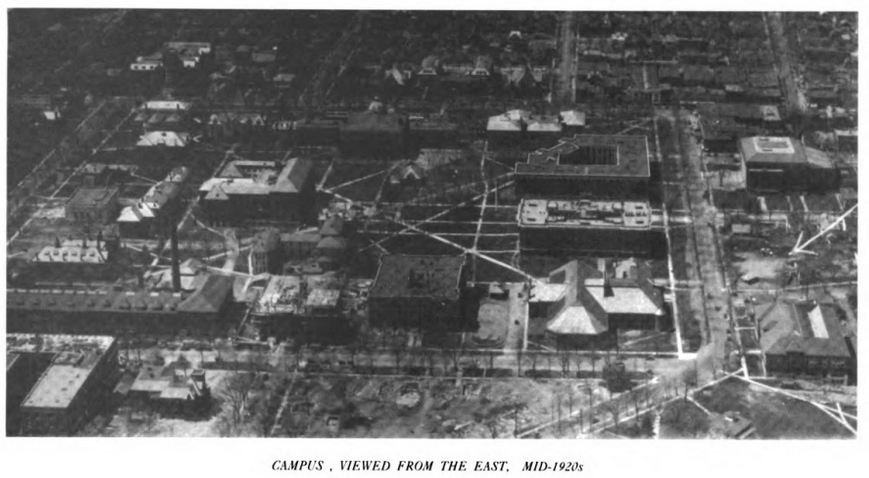 "Barely -- yes, of course, this was Ann Arbor. There was the Campus, and there were the University buildings, plus various frame structures plainly built for utility rather than with an eye to architectural elegance. But what a change had come over the place!"

In the wake of the armistice, the university quickly abandoned most of its wartime measures and programs in its return to normalcy, while looking almost immediately to expand its physical footprint. The changes that followed were both ideological and physical. The militarism that had swept over campus in 1916 and 1917 had quickly worn out, and the end of the war was a relief even for those only indirectly connected to the conflict itself. "With the demobilization of the army and navy units following the signing of the armistice, the student body promptly turned its attention to the rehabilitation of its cherished institutions and traditions" wrote the Committee on Student Affairs. "With the opening of the second semester the work of reconstruction had been so thoroughly effected that the casual observer would have difficulty in realizing that grim-visaged war had ever invaded this peaceful campus "[2]. These were not the words of students who still believed in the glory and necessity of the war as they had two short years earlier. Even though they had been luckier than their peers who had found themselves shipped across the Atlantic to fight, the students who had remained in Ann Arbor over the course of World War I had been affected by it and celebrated its close. 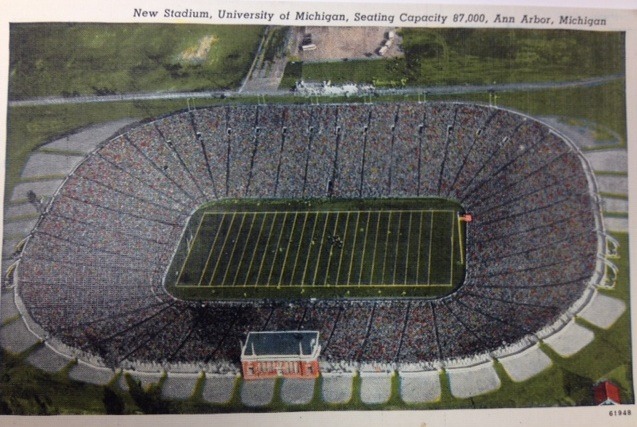 This ideological backing down from militarism perhaps factored into the physical changes that shaped campus in the postwar years. With the dismantling of the SATC, men of which had occupied fraternity houses and university buildings, construction on the Michigan Union could finally be completed. Funds allocated before the war finally set in motion the building of the north wing of the Hatcher Graduate Library and a new University Hospital. This building boom continued long into the decade after the armistice.  Harry Hutchins' successor as university president, Marion Burton, placed a premium on campus expansion and oversaw the construction of the Clements Library, the Law Quad, and Couzens Hall [3]. Eventually, the university had been scrubbed clean of its ramshackle barracks and repurposed training grounds, replaced by many of the campus buildings that remain today. The haste with which students and administrators did away with the wartime measures demonstrated a weariness with the war, and the postwar construction drives may have signalled a desire to leave that "tidal-wave of militarism" decidedly in the past [4].

However, not everything that the war had prompted disappeared in its aftermath. Most notably, the ROTC, whose University of Michigan chapter was established in 1917 alongside the SATC, remained an element of student life following the war; it remains on campus at present. ROTC and SATC students were reincorporated into regular university life, as college classes replaced military drills, and khaki uniforms were left in closets.

In sum, the "great military establishment" that had been the University of Michigan in mid-1918 was decidedly no more, transformed back to its previous peaceful state in a matter of weeks by its students, faculty, and administrators [5]. The war had shaped the soldiers who returned from overseas, but also those who had remained in Ann Arbor. World War I had not been the sole province of the men who fought it, but instead was intertwined with the lives of men and women who had supported them from the United States. The contributions made by those on the 'home front' constitute a story of the war that is entirely as deserving of attention as the contributions made by those on the front, which forms the next exhibit of this project.