The Ann Arbor of mid-1917 appeared a very different one from a year earlier. Plenty had changed within the city’s communities, and its university looked different too, as it had turned from debating war preparedness and mandatory training for students in the Michigan Daily to converting campus facilities to the war effort and campus grounds to military training. The Morrill Act of 1862 provided 60 colleges with land grants, which they could use for agriculture, mechanical arts, or on the occasion of World War I, military training [1]. Built before 1862, the University of Michigan was not included in the Morrill Act.

Hence the university had to build a drill program from scratch and repurpose the campus facilities and grounds to prepare students to serve in the war [2]. From the headquarters of war preparedness organizations, like the Young Men’s Christian Association (YMCA), to barracks for the Students’ Army Training Corps (SATC) to whole areas of campus, like Ferry Field, turned into drill grounds, facilities once devoted to teaching and recreation now turned to military training and war relief.  In addition, campus auditoriums hosted events related to war activities and support. Hill Auditorium hosted rallies about the war [3]. The glee club performed send-offs for the the naval militia [4]. And college halls were used to set up ballot boxes to facilitate votes on instituting mandatory military training of students [5]. Even the face of the newly acquired Arboretum would be changed to accommodate trench warfare practice [6]. 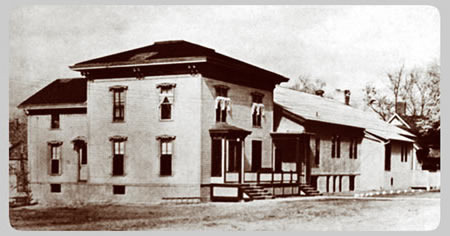 The Michigan Union, which began as a student organization on campus in 1904, purchased the former house of Judge Thomas M. Cooley in order to revamp it into a recreation area for the Union. Although renovation began in 1916, the Michigan Union Building was repurposed in 1917 to provide a mess hall and barracks for the SATC during the war [7]. 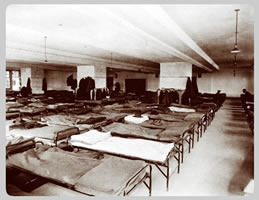 Barracks in the Union 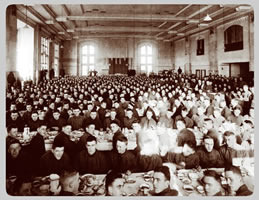 The university hosted military student training groups, non-college draftees, and humanitarian relief organizations, all in addition to the student body. Due to this increase in the population of the campus community, the university struggled to provide housing and spaces in which all of these groups could operate. To meet these needs, the Barbour Gymnasium became the first Ann Arbor Hostess House, a place for soldiers to socialize with friends and family, with the arrival of the first detachment of army mechanics in training in June of 1917.

Donations of furniture, pianos, and comforts of home from the campus community, including fraternities, make the parlours of the Barbour Gymnasium a comfortable abode for members of the military, their friends, and family to socialize. Over the next few months, however, the number of residents on campus grew to the point that the Barbour Gymnasium could no longer accommodate the demand. In response, the regents offered Memorial Hall (today known as the University of Michigan Museum of Art) to the collegiate alumnae to provide a new location for the Hostess House [8].  With an influx of more furniture and entertainment, the transition to Memorial proceeded smoothly [9]. 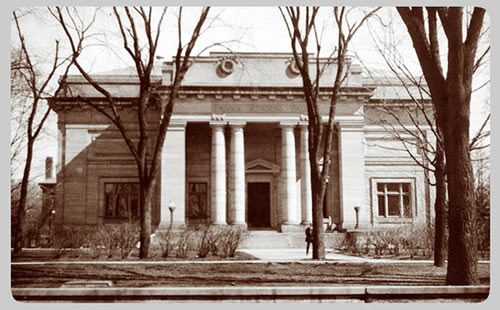 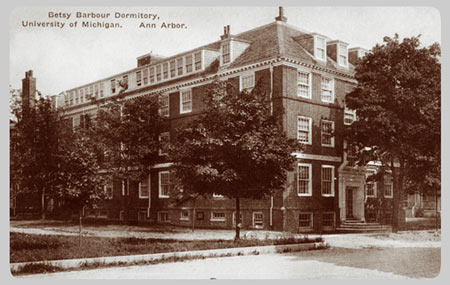 In addition to preparing new enlistees for the front, the University of Michigan participated extensively in war preparedness by granting organizations such as the Red Cross the use of buildings on campus. The Red Cross, whose members and volunteers prepared bandages, provided stationery for soldiers, and knitted garments, used the President’s House as their headquarters in Ann Arbor during the war [10].

Moreover, the university erected temporary, make-shift buildings to lessen the strain of increased numbers, such as a mess hall next to the Union. Spaces traditionally used solely for recreation and exercise, such as the Waterman Gymnasium (pictured beow), were used as barracks. Of the Fraternity houses, one of the oldest forms of student housing at University of Michigan, thity-five opened up their doors to provide housing for the overflow of residents and visitors on campus [11]. 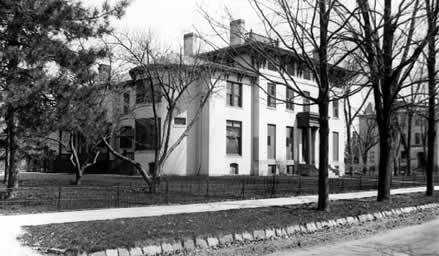 The Helen Newberry and Martha Cook buildings were also built over the course of the war. With the war’s conclusion, the University of Michigan continued to construct facilities to house the ever-growing number of students and fill need for housing. The 1920s would see the construction of Betsy Barbour and Mosher-Jordan dormitories. University of Michigan continues its tradition of construction to this day! 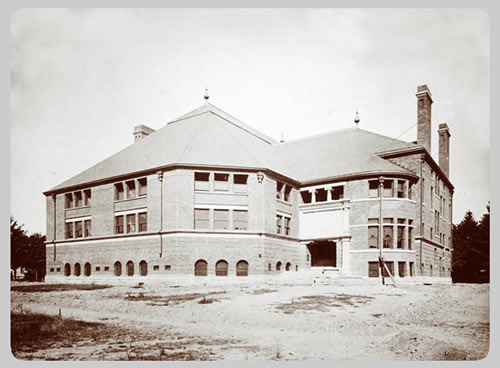 Thus, from the repurposing of campus facilities to the construction of entirely new buildings, the campus of the University changed greatly during the war and afterwards. Despite the difficulties with accommodating space and scheduling conflicts, military trainees, war relief organizations, students and faculty worked together to support the war effort and maintain the academic goals of University of Michigan. Although the traditional purposes of campus facilities would resume post war, organizations such as the ROTC would remain in addition to the newly built facilities.