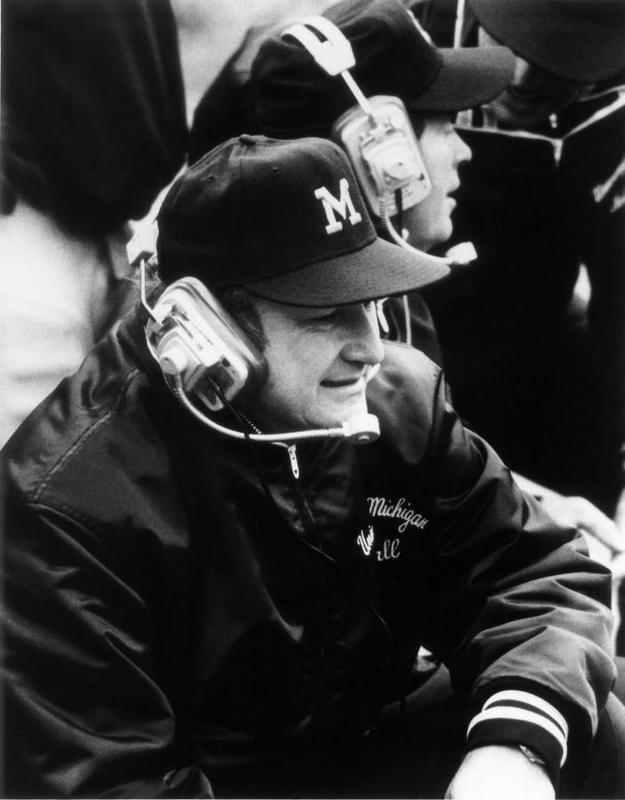 Schembechler on the sidelines.

Glenn “Bo” Schembechler (1929-2006) was the football coach at the University of Michigan from 1969-1989. In his twenty-one seasons, Schembechler’s Wolverines compiled a record of 194-48-5, making Schembechler the winningest coach in Michigan history. Schembechler’s teams won or shared thirteen Big Ten titles, and seventeen of his teams finished within the top ten in the Associated Press poll. Perhaps most importantly, Schembechler held a winning record against Ohio State University, 11-9-1.

The decade prior to Schembechler’s arrival had been unspectacular for Michigan football. From 1959-1968, the Wolverines posted four losing seasons and had been dominated by their rivals— Michigan State 7-0-1 and Ohio State 7-2. Attendance suffered, and rarely exceeded 70,000 in the 100,000-seat Michigan Stadium.[1]

Schembechler quickly began revamping the program. The new coach told his players before spring practice “to prepare for the roughest months of their lives.”[2] Schembechler’s practices were so demanding that many players quit.[3] This in turn inspired Schembechler’s famous expression, “Those who stay will be champions.” Schembechler’s discipline paid off, and in his first season he defeated Ohio State, which was ranked first nationally at that time. This game launched what would be known as “The Ten Year War” between the two rivals, with the Big Ten championship and Rose Bowl often at stake.