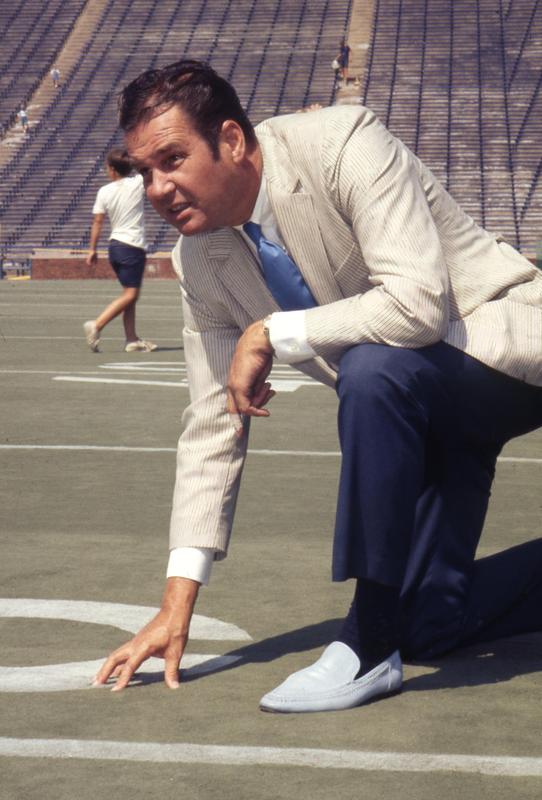 When Don Canham took the job of Michigan Athletic Director in 1968, he was determined to expand the audience and profile of Michigan sports. A long-time track coach at U-M, Canham also brought business savvy and an entrepreneurial spirit to his role as Athletic Director. He doubled the budget of the athletic department within a decade, and by his last season in 1988, he had turned college athletics into a multi-million dollar industry.

Much of the athletic department’s current mass appeal can be attributed to the work of Canham and Will Perry, the Sports Information Director, who developed marketing campaigns through detailed and well-designed season ticket mailers in order to earn significant profits for the business. Canham developed the mass production of souvenirs, popularized tailgating before football games and encouraged the entire family to participate in the “spectacle”[1] of Michigan athletics. When Canham became Athletic Director, attendance at football games was just 67,000 per game.[2] By 1975, “The Big House” averaged 90,000 fans per home game. That season’s game against Purdue surpassed the 100,000 attendance mark. In the forty years since, many fans have spent their Fall Saturdays at Michigan Stadium.[3]

Additionally, Canham organized promotions to draw new audiences to Michigan, such as opportunities for schools like Slippery Rock University — a Division II school from the Pennsylvania State Athletic Conference with just 8,800 students — to play in Michigan Stadium and exhibitions for the Detroit Lions. If it could raise money and promote Michigan athletics, Don Canham loved to hear about it. He was fascinated by the creative aspects of sport, doing whatever he could to ensure the Michigan athletic department would continue to encourage innovation.