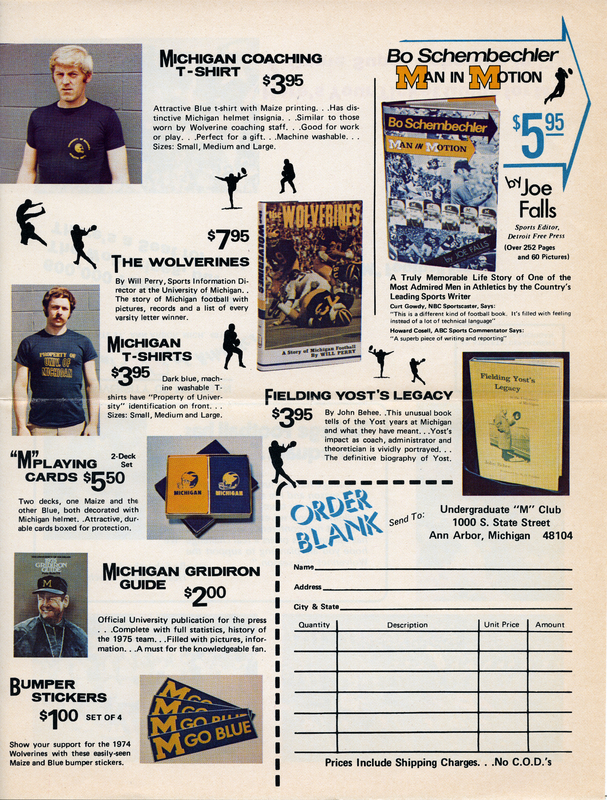 Today it is commonplace to see a myriad of Michigan memorabilia from coffee mugs to baseball caps. They can be seen in the M Den — the official store of the Michigan athletic department — but also on the streets of Ann Arbor, and beyond. However, before Don Canham’s ascension to the position of Athletic Director at U-M in 1968, the athletic department sold only pennants and a few shirts. Though Fielding Yost once sent copies of the 100 Year History of Michigan Athletics to students across the country, and would send letter sweaters and blankets to certain fans, those souvenirs  paled in comparison to Canham’s aggressive souvenir campaign 50 years later.[1]

After visiting UCLA as a track coach in the 1950s, Canham observed the school selling a variety of souvenirs to students, alumni, and fans. He concluded that a similar souvenir program would help to improve Michigan’s athletic program and build fan loyalty. Canham reasoned that “if people didn’t buy football tickets they might buy coffee cups,”[2] It was a mentality that motivated him to imagine any object with a U-M insignia. But, rather than permit stores on campus to sell Michigan souvenirs— and allow the University to reap the profits — Canham wanted the Athletic Department to be the sole proprietor of souvenirs. [3] In the 1980s, Canham trademarked the “Block M” logo now synonymous with the University, the Winged Helmet, the phrase “M Go Blue,” the Wolverine, and other similar designs. These trademarks ensured that only the U-M athletic department could benefit financially from the selling of Michigan souvenirs, from frisbees and floor mats to aprons and scarves.[4]

[2] Canham, Don B., and Larry Paladino. From the Inside: A Half-century of Michigan Athletics. Ann Arbor, MI: Olympia Sports, 1996.