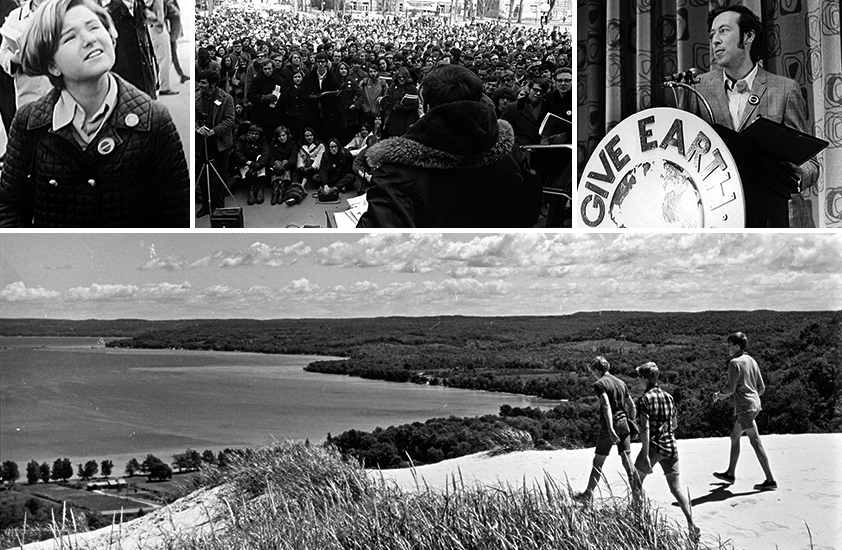 In March 1970, students in Environmental Action for Survival (ENACT) organized a four-day Teach-In on the Environment at the University of Michigan, the precursor of the national Earth Day demonstration that mobilized twenty million participants on April 22, 1970.  "Give Earth a Chance" explores these pivotal events from the perspectives of the ENACT activists at the University of Michigan and their counterparts in Environmental Action, the national committee that coordinated the first Earth Day.  The exhibit traces the origins of the environmental movement in the state of Michigan and in modern America and then focuses in depth on the ways that activist groups and policymakers responded to the "ecological crisis" during the late 1960s and early 1970s.  "Give Earth a Chance" tells the stories behind major environmental breakthroughs in Michigan, including the establishment of the Pictured Rocks and Sleeping Bear Dunes National Lakeshores, the enactment of the landmark Michigan Environmental Protection Act of 1970, and the formation of the Ecology Center in Ann Arbor.  The exhibit also investigates the volatile political conflicts over air and water pollution, toxic chemicals, and nuclear power at the state and national levels as environmental organizations launched campaigns to save the Great Lakes, reduce automobile emissions and industrial contamination, fight for environmental justice, and limit environmental degradation by government, corporations and consumers.

"Give Earth a Chance" is a production of "Michigan in the World: Local and Global Stories," a public history collaboration between the Department of History and the Eisenberg Institute for Historical Studies. The design of the online exhibit combines a historical narrative with more than six hundred archival documents, photographs, video clips, and interview segments--allowing the audience to explore original sources and multiple perspectives in depth. The goal is to provide a multimedia resource for secondary school students and college courses while recounting these pivotal historical events for a general public audience.  "Give Earth a Chance" is also part of the 2017 bicentennial commemoration of the University of Michigan's history and designed to contribute to the 50th anniversary commemoration of Earth Day 1970 at the University of Michigan and beyond.

This digital exhibit, published in January 2018, led to the establishment of the Environmental Justice HistoryLab in the U-M History Department.  The Environmental Justice HistoryLab includes a partnership with the Ecology Center, which is based in Ann Arbor, to document the history of environmental activism, justice, and sustainability in the city of Ann Arbor and the state of Michigan since the 1960s.  The Environmental Justice HistoryLab also participated in the 50th anniversary of Earth Day by organizing an event featuring the leaders of the ENACT Teach-In of 1970 and has produced a documentary film about the ENACT Teach-In as well.  The Earth Day section of this project featured twice in the Made by History project of the Washington Post: an essay on the legacies of the ENACT Teach-In (March 11, 2020) and a second piece about the first Earth Day (April 22, 1970).

Find out about all of the programs of the Environmental Justice HistoryLab here. Please also visit "History at Work," featuring the public engagement projects of the U-M History Department, for more information on the U-M HistoryLabs initiative.