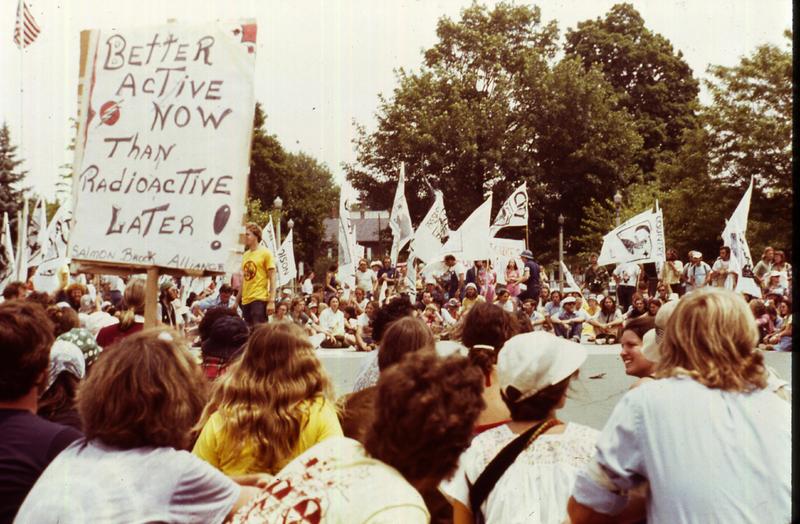 During the 1980s, college students across the United States rallied against nuclear power and testing.

The application of nuclear technology has always been controversial starting with the atomic bombings of Hiroshima and Nagasaki in 1945. The public first became aware and concerned about the testing of nuclear technology in 1954, and the number of nuclear activists only increased in subsequent years. While concerns initially centered on the threat to modern civilization for a global nuclear war, concerns slowly began to rise regarding the safe operation and sustainment of nuclear power. Many studies have shown that the public perceives nuclear power as a very risky technology and nuclear energy has slowly declined in popularity as nuclear disasters became more and more catastrophic and less frequent. The United States is responsible for some of the largest and most destructive nuclear disasters including, Chalk River, SL-1, Fermi 1, and Three Mile Island. 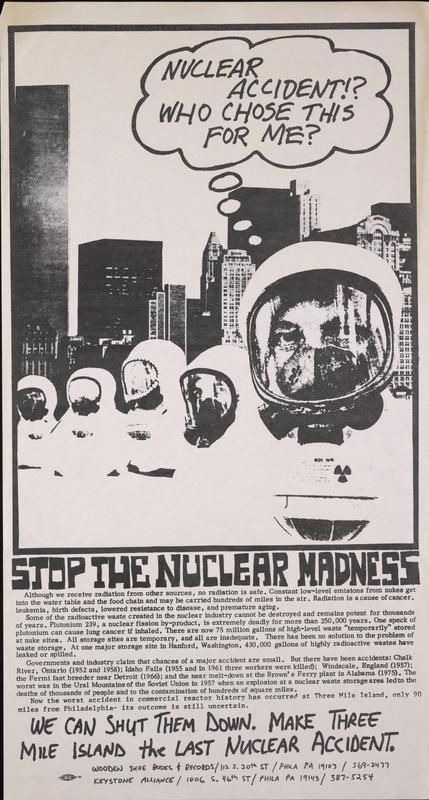 Everyone is radioactive, and everyone encounters radiation every day. While no radiation is “safe” the amounts of radiation that humans are exposed to every day are low enough that it does not present a hazard to public health. Some of the most dangerous radioactive elements known to man are created in nuclear power plants. These radioactive elements contain but are not limited to; Cesium-137, Strontium-90, Iodine 131, Plutonium 239 and Plutonium 240. These “new” radioactive substances are called nuclides, which are so dangerous that, if inhaled, even just a thousandth of a gram of Plutonium-239 induces massive fibrosis of the lungs and can cause death within days (A pinch of uranium, a touch of technocracy and a lot of luck, by Richard Pollack). When nuclear disasters occur the nuclear power plants could suffer a meltdown, meaning the melting through of the containment structure and releasing radiation to the ground and air. Leading critic, Dr. Henry W Kendall of Massachusetts Institute of Technology, MIT, once said that “the uncontrolled release of even 5 of 10% of the core inventory could bring instantaneous death to persons up to 60-100 miles from a large fission-power reactor. Persons hundreds of miles distant could suffer radiation sickness, genetic damage, and increased incidence of many diseases."

Although nuclear energy dates back to 1943 when the first controlled nuclear fission reaction too place in Chicago as part of the Manhattan Project, the American public did not comprehend its significance until August 1945 when two atomic bombs were dropped on Japan to end World War II.  Upon seeing the destruction caused by the bombs, concern arose over the regulation of nuclear technology. In 1946, the Atomic Energy Act passed, which attempted to transfer the responsibility for nuclear development from the military to civilians. This Act established the AEC, or Atomic Energy Commission, and the JCAE, or Joint Committee on Atomic Energy. The JCAE was created to oversee the AEC, and the AEC had a dual purpose of promoting and regulating atomic energy. The AEC attempted to encourage industry participation in nuclear power as early as 1948, but most early projects were run by the AEC. Industry participation was largely indirect and only on a contractual basis. In an attempt to shift some of the burden for development of civilian nuclear power form the government to the private industry, a revised Atomic Energy Act passed in 1954. 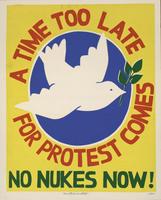 The first nuclear accident at Chalk River, a Canadian reactor co-operated with the United States and Great Britain, occurred on December 12, 1952. The National Research Reactor suffered a failure that shut down the facility due to operational poor decisions and a chain reaction that the operators we unable to control. To control the chain reaction, the operators opened the containment pressure cooling system. This act triggered an explosion which destroyed the reactor core and released the reactor fuel. Thousands of nuclear fission particles escaped into the atmosphere along with a million liters of contaminated water near the Ottawa River. Before Jimmy Carter became the president, he was a nuclear engineer in the Navy, and he was one of the hundreds of Canadian and American Soldiers ordered to participate in cleaning up the accident. Five years later, the Chalk River Reactor had another accident. Several rods of uranium nuclear fuel overheated and broke inside of the core. After the reactor products had fallen, nuclear particles were able to enter the buildings ventilation system that was stuck in the “open” position. 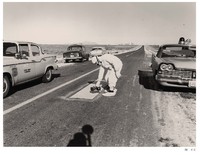 after the SL-1 accident

The SL-1 or Stationary Low-Power Reactor Number One, was the first fatal nuclear accident in the United States. In January 1961, the reactor exploded and “killed one navy technician and two army technicians, and released radioactivity "largely confined" to the reactor building. The three men were killed as they moved fuel rods in a "routine" preparation for the reactor start-up… The men were so heavily exposed to radiation that their hands had to be buried separately with other radioactive waste, and their bodies were interred in lead coffins" (Arlington National Cemetery Records). The reactor was part of a prototype nuclear plant designed for the military. The Army envisioned using nuclear power to fuel distant radar stations, so the plant had to be designed in a way that it was easy to operate, transport, and assemble. In the end, SL-1 would only produce nuclear energy for two years after its construction in 1958 and its use was mainly to train nuclear personnel for other facilities.

There are large variations in understanding of the issues surrounding nuclear power and nuclear technologies in general. The anti-nuclear movement is a worldwide movement that opposes various nuclear technologies. Some major anti-nuclear groups include Campaign for Nuclear Disarmament, International Physicians for the Prevention of Nuclear War, and the Nuclear Information Service. The initial objective of the anti-nuclear movement was nuclear disarmament thought starting in the 1960s, the opposition spread to include all use of nuclear power. Scientists, diplomats, and concerned activists, have debated nuclear weapons since nuclear weapons testing began in 1954 in the Pacific Ocean. This led to the 1963 Partial Test Ban Treaty which prohibited atmospheric nuclear testing. However, opposition to nuclear power emerged in the early 1960s when educated members of the scientific community began to express their concerns. Nuclear power activism continued to gain supporters as it became a major pubic issue in the early 1970’s. Opposition to nuclear power still exists today, but nuclear power has gained support in the last decade as interests in global warming and clean energy are becoming more prevalent. 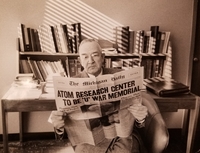 Proponents of nuclear energy, or the pro-nuclear movement, believe that nuclear energy is a sustainable source of clean energy. A professor from the University of Michigan, a supporter of nuclear power, once said that we will need to have conservation, coal, and nuclear power to fulfill our energy needs in the future. Nuclear power is a source that can and will reduce carbon emissions and increase energy security, by decreasing the dependence on imported fossil fuels. Supporters of nuclear energy claim that it produces virtually no conventional air pollution when compared to the current, most widely used source of energy, fossil fuels. They also claim that the storage of nuclear waste risks are limited and can be further reduced by using the latest technology in newer reactors. 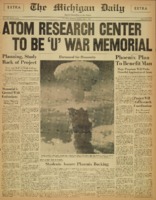 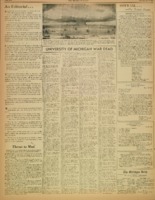 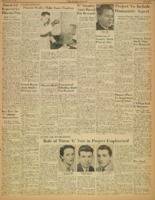 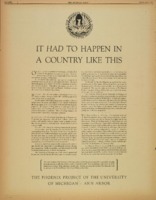 Click on the above documents to read what the university faculty read. 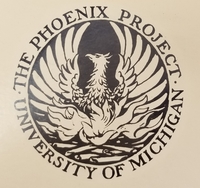 The University of Michigan started research in 1948 into peaceful uses of atomic energy, and named this research the Michigan Memorial Phoenix Project (MMPP). The Phoenix Project was meant to serve as a “living memorial” for the 579 members of the University of Michigan community who gave their lives during the war. The Phoenix Project was also the university’s first fundraising campaign. The novel approach to honoring those who died in the war proved to have broad appeal among alumni and friends, and the campaign raised $7.3 million (almost $64 million in 2014 dollars) by the time it concluded in 1953. In addition to supporting the construction and use of the Ford Nuclear Reactor, now decommissioned, the Phoenix Project has helped fund studies on the applications of nuclear technology in such fields as medicine, chemistry, physics, mineralogy, archeology, engineering, and law.