National Parks and the 1964 Wilderness Act 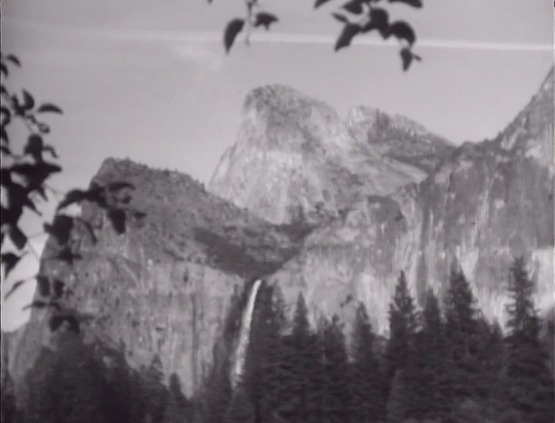 Around the end of the 19th century, more and more Americans began to realize the importance of preserving natural areas for the enjoyment of the public.  The first national parks, established in 1872 in Montana and Wyoming, was named Yellowstone. Newspapers at the time explained that the federal government had established this area "as a public park or pleasuring-ground for the benefit and enjoyment of the people."  In 1892, preservationist John Muir founded the Sierra Club, a pioneer among environmental organizations. This marked an important milestone in environmental history and in the creation of modern environmentalism. In 1916, President Woodrow Wilson created the National Park Service, which would be responsible for protecting and caring for the increasing number of national parks that followed after Yellowstone.  The early national parks movement focused on preservation for beauty and recreational purposes, and only with the rise of the environmental movement of the 1950s and 1960s did Americans begin to understand the importance of preserving wilderness area for the ecological benefits as well.

Another important transitional period that occurred concurrently with the development and evolution of the Sierra Club was the shift in thinking from conservation to preservation. Around what may be seen as the very beginnings of the environmental movement, the widely accepted idea was that land was being protected for conservation purposes. Resources were being used up too quickly and if the land and its resources were not conserved, there would eventually come a time where none of these resources would be left for utilization by humans. This video "Conservation of Natural Resources," produced for educational purposes during the 1930s, outlines the importance of conservation and the mindset behind the movement. Eventually, the shift from resource conservation to a more preservation-based approach occurred. At first, conservationists used the word “recreation” frequently in describing the importance of protecting these areas, while recognizing that other federal lands should be managed for harvesting timber and mining for minerals and drilling for oil.  But in the 1950s and 1960s, scientists and environmentalists began to acknowledge the importance of protecting land simply because allowing nature to remain untouched could benefit the future of the environment and the planet by preserving biodiversity and protecting species of trees, plants, and animals.

During the 1950s and 1960s, the Sierra Club increasingly fought against development in national parks and national forests under the leadership of executive director David Brower. In the 1950s, the organization successfully fought the federal government to stop the construction of hydroelectric dams in Dinosaur National Monument, on the border between Utah and Colorado, but later lost a battle to halt the Glen Canyon Dam in Arizona. In the early 1960s, the Sierra Club led the push for the National Wilderness Act, which took years of hard work and dedication. In this 1962 congressional hearing, Brower and other environmental activists lobbied for a "Wilderness Preservation System" that would provide "outdoor recreation" for Americans and protect beautiful and fragile lands from development by logging, mining, and oil companies.  Brower told lawmakers that "wilderness adds quality in roadside scenery. Wilderness lets a place have a beyond to it. Wilderness symbolizes the freedom to choose what kind of terrain you want to look at, or hope someday to enter or to save for your children to enter. Without it, the world is a cage."

David Brower argued for importance of preserving natural areas and the benefit that they could have on the lives of those fortunate enough to experience them and also people in the future, who had the "right to know wilderness." According to him, natural areas added value to the lives of those who may otherwise live mundanely – uninspired by the world around them. Brower closed his testimony by saying that if the Congress did not act now, "the future will lose enormously" and "our most fragile natural resource" would be destroyed by economic development and resource extraction.  This drive to save the environment for generations to come and preserve the world as it naturally existed pushed lawmakers to pass the Wilderness Act and later drove environmentalists to take more actions to improve and save the environment around them. 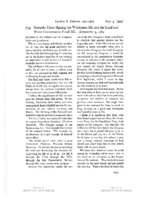 On September 3, 1964, President Lyndon Johnson signed the Wilderness Act into law, preserving nine million acres of land in the United States in its "original and unchanging beauty and wonder."  The bill established the National Wilderness Preservation System to protect natural resources by increasing the number of national parks, forests, and soon, lakeshores. Not only did this bill make the process of protecting national wilderness areas easier, it also proved that the country and its president acknowledged the importance of these areas in relation to environmental health and human wellbeing. The day after signing the Wilderness Act, Johnson told Americans that "the significance of this occasion goes far beyond these bills alone. In this century, Americans have wisely and have courageously kept a faithful trust to the conservation of our natural resources and beauty. But the long strides forward have tended to come in periods of concerted effort."

President Johnson mentioned actions taken by the administrations of Theodore Roosevelt such as the creation of national forests, and of Franklin Delano Roosevelt like the Civilian Conservation Corps. However, he said that the Wilderness Act was unprecedented and represented a new outlook and a new national desire to be forward thinking in protecting the environment. Johnson ended his remarks by saying that “true leadership must provide for the next decade and not merely the next day,” and that that is exactly the direction he felt this nation was moving.  The federal government added fifty new national parks during Johnson's time in office, and Congress also passed landmark legislation establishing the Wild and Scenic River System (1967) among other accomplishments. 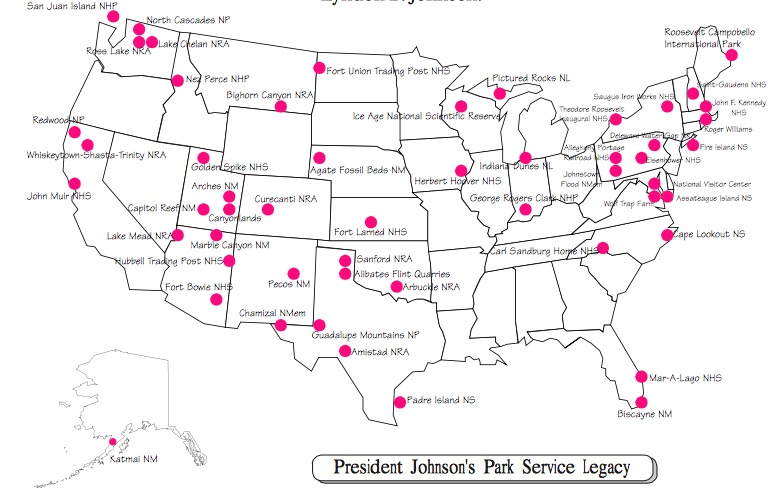 During the mid-to-late 1960s, the Sierra Club continued to lead the fight for preservation of wilderness areas and protection of national parks, along with other groups such as the Wilderness Society.  The Johnson administration supported massive projects such as hydroelectric dams to promote economic growth, which led to conflicts with environmental organizations and exposed schisms between the conservationist and preservationist positions.  The Sierra Club and its allies fought a long battle to prevent the federal government from constructing dams in the Grand Canyon National Park, ultimately winning in 1968.  The organization also played a key role in the establishment of Redwoods National Park in Northern California and North Cascades National Park in the state of Washington, over the opposition of the timber companies and other extractive industries that continued their efforts to exploit natural resources even in areas set aside for preservation.

In 1970, the School of Natural Resources at the University of Michigan produced a television series called "Ecology: Man and the Environment" to introduce the general public to the major issues of the 1960s environmental movement. In an episode titled “Wilderness,” Doug Scott, a founding member of the student group ENACT that was organizing the nation's first environmental teach-in, spoke on the history and importance of preserving wilderness areas from extractive development in the United States:

In Michigan during the 1960s, the Sierra Club and other allies in the wilderness preservation movement assisted Senator Philip Hart in his struggles to establish Sleeping Bear Dunes and the Pictured Rocks of Northern Michigan as protected national lakeshores, as the following sections explore.

"Wilderness Preservation System," May 7-11, 1962, Hearings before the Subcommittee on Public Lands, Committee on Interior and Insular Affairs, House of Representatives (Washington: GPO, 1962)

Public Papers of the Presidents 1964

National Park Service, "Lyndon B. Johnson and the Environment," https://www.nps.gov/lyjo/planyourvisit/upload/EnvironmentCS2.pdf