Ecology Center: Ann Arbor and Beyond 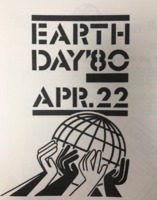 Thanks in large part to the leadership of the Ecology Center, the Ann Arbor community had seen lots of environmental progress since the Teach-In and the first Earth Day in 1970. There was, however, a need for new programming to reinvigorate environmental activism. The Ecology Center organized Earth Day '80 with the mission: "We have an opportunity to reassert the importance of environmental values and to promote alternative, ecologically sound policies for the eighties." Additionally, "Earth Day '80 will hopefully serve as a springboard for a new nationwide commitment to a more livable future." This newsletter details the events of the 10th Anniversary of Earth Day, as well as the significant efforts the Ecology Center was working towards at the end of the 1970s. For example, the Ecology Center testified before the Michigan State Legislature regarding the negative consequences of nuclear energy. At this time, the Bike-A-Thon was extremely popular and the Ecology Center focused its attention on finding solutions to waste problems, other statewide lobbying efforts, and improving the recycling program. The Ecology Center had grown tremendously since the aftermath of the ENACT Teach-In and first Earth Day, becoming an integral part of the environmental movement in Ann Arbor by 1980 and in the subsequent decades. 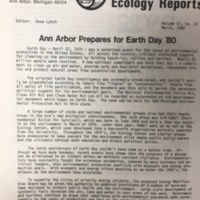 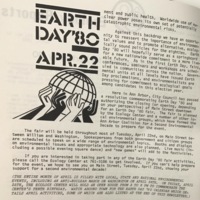 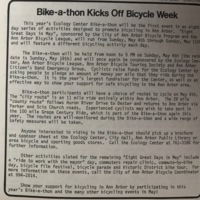 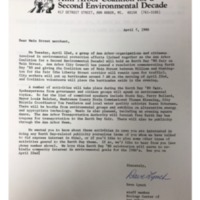 Tracey Easthope on How the Ecology Center

The Ecology Center, in the 1990s, began working with companies to ensure that they were not selling harmful products. Tracey Easthope, a senior strategist at the Ecology Center, joined the organization in the late 1980s after obtaining a master's degree in public health at the University of Michigan.  In this interview, Easthope describes how Johnson Controls made foam seat cushions for cars, which released a million and a half pounds of methylene chloride—a carcinogen. The actions of this company impacted a trailer park and neighborhoods located nearby. The Ecology Center, in turn, sued Johnson controls and worked with the United Auto Workers union to "figure out what was going on inside the plant and what we could actually use the leverage of the lawsuit to change." They eventually agreed to use a water-based solvent instead of the methylene chloride, as well as several changes. The Ecology Center also gave money to individuals to teach environmental sampling to the students who were impacted by these poisonous emissions.

Mike Garfield on the Ecology

The Recycling Center became so large that by the 1990s, the Ecology Center merged with Recycle Ann Arbor to become a subsidiary non-profit. The Ecology Center shifted their focus from sustainable or environmental programming to education and advocacy. As such, they sought to reach out beyond Ann Arbor and Washtenaw County. They began to work more frequently in Lansing and took on many projects, particularly regarding toxic chemicals and their impacts on health. By focusing outwards, the Ecology Center sought to make more of an impact by working on projects that affected Michiganders as a whole, rather than solely working with the small Ann Arbor community.  In this interview, Mike Garfield, the director of the Ecology Center since 1993, discusses these major programs during the 1990s.