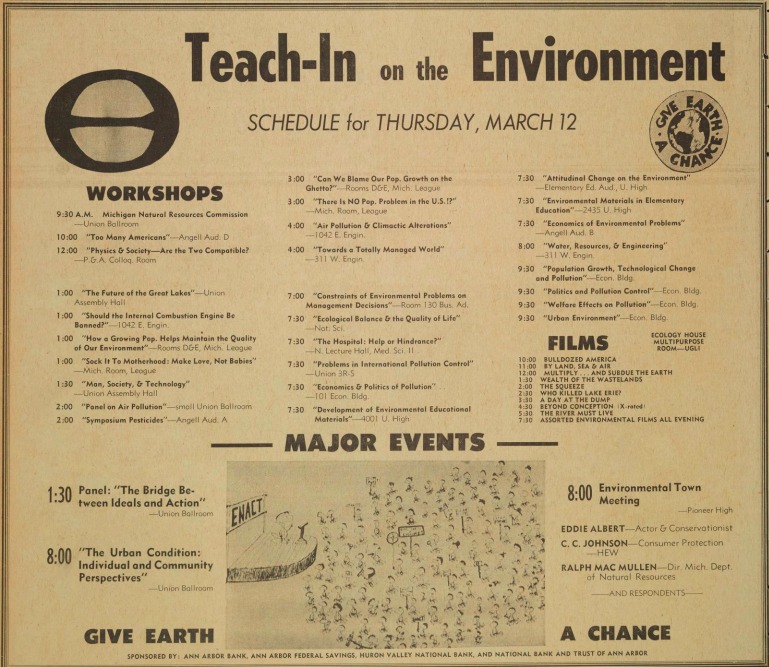 ENACT Schedule for Day 2 of the Teach-In 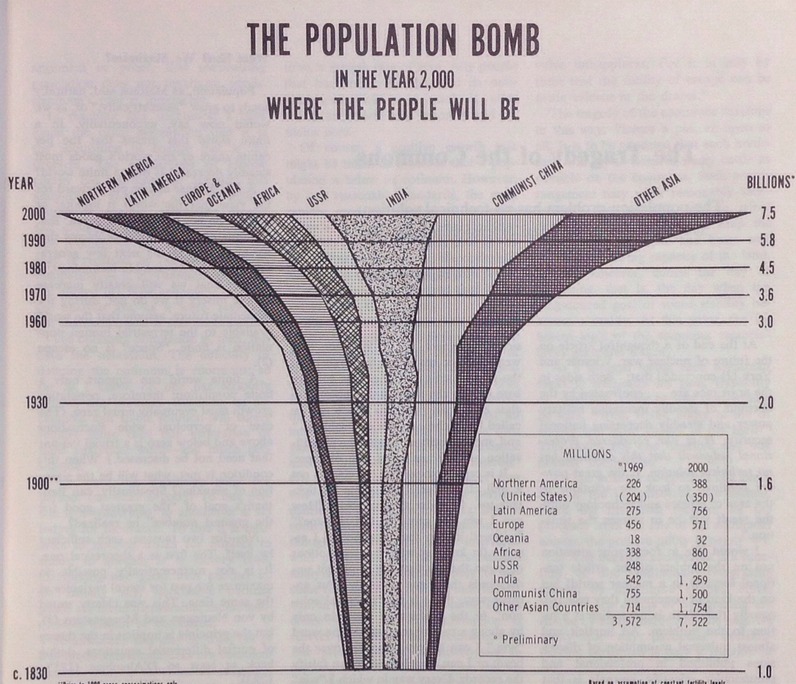 Day two of the ENACT Teach-In was filled with dozens of workshops and several films covering numerous topics, including population control. Population control had become a major area of concern for environmentalists in the 1960s. In 1968, Paul R. Ehrlich published the extremely influential book, The Population Bomb, which warned of a future filled with starvation and environmental disasters direcly associated with overpopulation. Young people concerned about the environment, especially young women, were deeply influenced by Ehrlich. According to author Joyce Maynard, after reading The Population Bomb, "she immediately felt the kind of fear she had felt during the Cuban missile crisis: not personal, individual fear but end-of-the-world fear, that by the time we were our parents' age we would be sardine-packed and tethered to our gas masks in a skyless cloud of smog."  Stephanie Mills, a student at Mills College in California, created a sensation in 1969 when she pledged in a valedcictory address to help save the environment by remaining childless.  "We are breeding ourselves out of existence," Mills warned, and "have horribly disfigured this planet. . . . The most humane thing for me to do is to have no children at all." 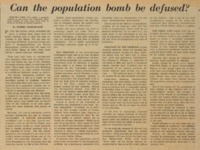 Daily: "Can the Population

The fear of an unsustainable population was very real. According to a Daily article by Pierre Pradervand, a U-M graduate student at the Center for Population Planning, in 1750 there were 800 million people on earth, in just 100 years the population skyrocketed to 1.26 billion, and by 1950 there were 2.52 billion. In 1970, the year of the Teach-In, the world was approaching 3.6 billion. The exponential growth in population was extremely alarming for environmentalists at the time. As the population continued to grow, the planet and its amount of resources stayed the same. The fear that resources would run out with the growing population drove environmentalists to seek solutions.

To many environmentalists, it was not enough to simply limit population growth. Levels of consumption also had to be decreased in order to make a difference. However, not every person used the same amount of resources. The Daily article pointed out that "the 205 million Americans who compose 5.7 percent of the world's people consume 50 per cent of the world's non-renewable resources," which was "more damaging on the ecosystem than the depletion cause by 800 million Chinese." Undeveloped and impoverished people who tended to have more children could not be blamed for the population bomb. Everyone, especially those who used the majority of resources, needed to limit their number of offspring and limit their consumption in order to make a significant impact on the environment.

Pradervand's article stated that the steps to defuse the population bomb included mass political change and large-scale planning to establish long-term transformations. However, the first steps began with individuals. Those in favor of population control advocated for abortion to be legal, for women to be "fully integrated into the labor force" to limit their number of children, tax benefits for couples who marry at older ages, and for sex education to be generalized across the country and have an emphasize on the ecological effect of large populations.  The article also encouraged U-M students to sign ENACT's Pledge of Social Responsibility. 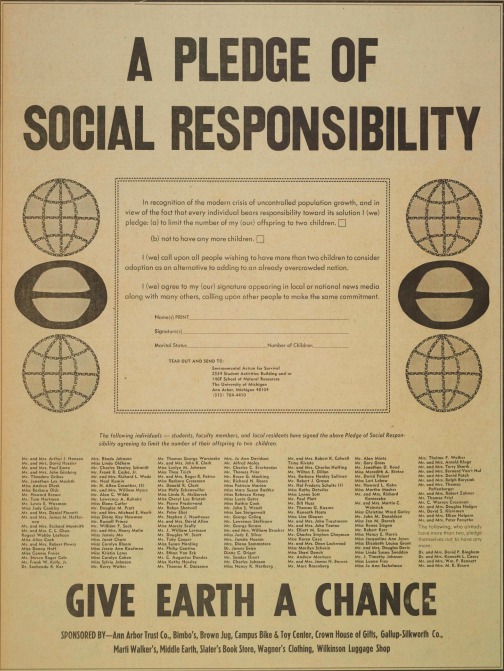 ENACT: "A Pledge of Social Responsibility" 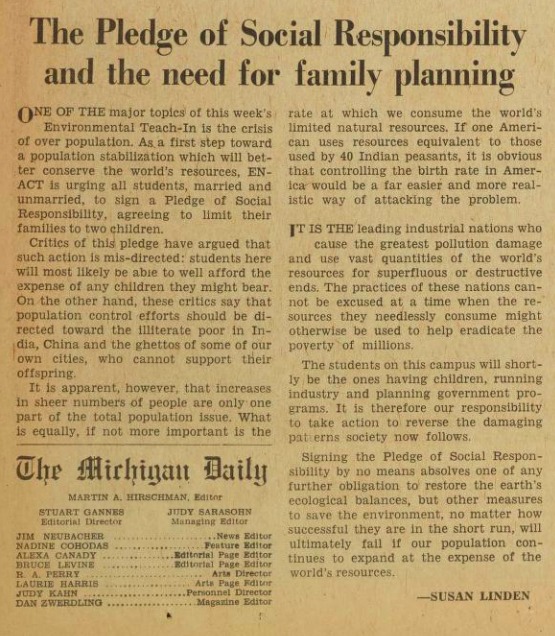 ENACT, along with other environmental groups, advocated women and families to only have two children. "Pledges of Social Responsibility" were placed in newspapers, like the Michigan Daily, to encourage people to have only two children or pledge to stop having children if they already had more than two. Students, faculty members, and local residents signed the pledge and sent it back to ENACT to publish in thier newsletters or the bottom of future pledges. At the bottom of the pledge published on March 12, 1970 in the Michigan Daily, over 100 individuals and couples had already signed the pledge, including ENACT member Elizabeth Grant. To encourage people to sign the pledge, the ENACT Steering Committee gave those covering population issues during the Teach-In $78 to make 1,000 buttons to give to people who signed the pledge.

The students of ENACT and their peers on campus were the next generation to have kids, run businesses, and run the government. Those concerned with population control took this role seriously, and saw it as their responsbility to take personal action to "reverse the damaging patters society now follows." To Susan Linden,

"Signing the Pledge of Social Responsibility by no means absolves one of any further obligation to restore the earth's ecological balances, but other measures to save the environment, no matter how succesful they are in the short run, will ultimately fall if out population contrinues to expand at the expense of the world's resources."

Despite the hundreds of signers, the pledge of social responsibility had many critics. Some argued that the pledge was "mis-directed" and students at the University of Michigan would "most likely be able to well afford of expense of any children they might bear." They critics also believed "population efforts should be directed toward illiterate poor in India, China and the ghettos... who cannot support their offsrping." However, for those in support of the pledge the sheer increase in population was only a fraction of the total population issue. The more important issue is the rate at which natural resources are consumed. Therefore, controlling the birth rate in America was extremely significant because Americans used more natural resources than any other country. 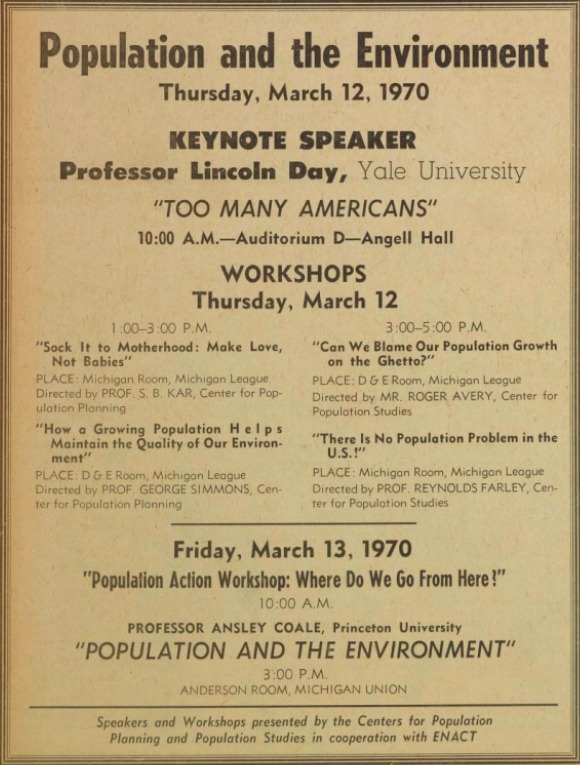 ENACT had several events dedicated to the issue of population control, mostly focused on the March 12, 1970, however a workshop and a talk on the subject were held on March 13th. ENACT worked closely with the Centers for Population Planning and Population Studies at the University of Michigan to plan and run the Teach-In events directly rated to population control. The keynote speaker on the subject was Professor Lincoln Day of Yale University. In 1964, Professor Day and his wife, Alice Day, published Too Many Americans, and like Ehrlich's thesis, it focused on population growth. Professor Day's thesis specifically analyzed the current rate of American population growth and argued that Americans population directly impacted the fate of people all over the world. The second speaker was Professor Ansley Coale of Princeton University, who worked at the University's Office of Population Research and had published Population Growth and Economic Development in Low-Income Countries in 1958. He also published Growth and Structure of Human Populations in 1972.

ENACT not only presented material on population control, but took a very strong stance on the issue as well. ENACT provided information on community-university projects that involved population growth, including information on the non-proft, Zero Population Growth (ZPR). ZPR was a non-profit, volunteer orangization which advocated that all measures be taken to slow population growth, including limiting families to only two children, making birth control methods available to all, and for tax laws to encourage small families rather than large. Bill Bryan ran the project group and held weekly meetings during the time of ENACT and the Teach-In. At the Teach-In, ZPR had a stand and helped educate people on the danger of high population as well as how they can help get involved and stop the "population bomb" as seen in the video to the right.