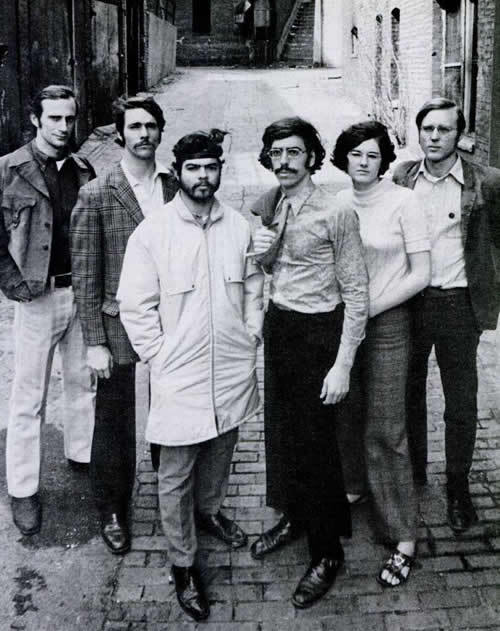 The Environmental Teach-In, Inc. staff consisted of young, dedicated activists with different academic and activist credentials. When Gaylord Nelson created the organization, he wanted to project solidarity and legitimacy to young people, a demographic that had become critical for the success of mass movements. The office was a dynamic environment, with a flat pay scale. The staff made major decisions democratically, and the shared goal of protecting the environment bonded staff members. This In Focus page briefly profiles Denis Hayes, Barbara Reid, and Peter Harnik, three staff members interviewed for this project in order to illuminate the agenda and tactics of the national Earth Day organizers.

Denis Hayes, the first national coordinator of Environmental Teach-In, Inc. grew up in a small paper mill community in Washington State near the Columbia River Gorge, which he described as one of the most stunningly beautiful areas on the planet. It was there he first came into contact with several environmental issues that particularly depressed him: air pollution from the paper mill frequently settled on his community, chemical spills into the river often reeked havoc on the local wildlife, and clear-cutting wiped out habitats. These issues had a profound effect on his later career and life.

After graduating high school, Denis Hayes attended a local community college. He left after two years profoundly depressed with the state of the world. He was concerned with nuclear obliteration, the Vietnam War, and civil rights movements and wanted to find a way to make a difference. He took several years off of school to search for hope and his place in the world. He traveled the globe, taking a railway trip in Siberia, and traveled the desert in Namibia. During his travels, he became more aware of theories of ecology and found them to be particularly compelling and decided that he could dedicate efforts towards furthering that cause. When Hayes decided it was time to return to school, he applied to one school: Stanford. This was his top choice because of notable professors like Paul Ehrlich, but when he arrived, he decided to major in history so he could focus on public policy rather than conduct field research in ecology. After graduating from Stanford, Hayes attended Harvard in a joint program in the law school and public policy school. Students in the policy program at Harvard were required to complete an off-campus student project. Hayes had heard about environmental teach-ins being organized at several other campuses, but as far as he knew, there was nothing planned at Harvard. Planning a teach-in at Harvard would serve to complete his project requirement, further his environmental interests, and in theory actually help the Earth.

Denis Hayes on his college experience, and becoming involved with Gaylord Nelson

Near the end of his first semester, Denis Hayes stepped up to organize this teach-in at Harvard and as a result, he was granted a fifteen-minute meeting with Gaylord Nelson, the senator from Wisconsin who was spearheading the effort nationally. He flew from Massachusetts to Washington, D.C. for the meeting. Though the meeting was only intended to run for a few minutes, it stretched over several hours, and by the time was over, Hayes chartered to oversee several teach-ins along the East Coast. A few days later, he received a call offering him a full-time job in Washington, D.C. as the national coordinator of Environmental Teach-In, Inc. Throughout the course of his life, Denis Hayes was searching for ways to effect real change in the world and he quickly realized that he was being presented with an opportunity to do just that. He elected to drop out of Harvard and relentlessly pursue the aims of the environmental movement.

Barbara Reid, the midwest coordinator of Environmental Teach-In, Inc. grew up suburban Detroit, although she spent three of her teenage years in Venezuela with her family. After high school, she enrolled at the University of Michigan which she attended between 1964 and 1968. She studied political science and Russian. It was at the University of Michigan where she was exposed to community organizing for the first time. She attended the Vietnam Teach-In in March of 1965, which was influential on her view of world affairs. She was intensely interested in the community organizing aspect of the environmental movement. She honed her community organizing skills working for the Robert Kennedy presidential campaign. She organized rallies and canvassed for the senator until his death in 1969.

Barbara Reid on her interest in the environment.

After the Kennedy campaign ended prematurely, Barbara Reid accepted a job with the National Security Agency in Washington D.C. After less than a year, she decided to make a change. She applied for a job with the Conservation Foundation where she found she could develop her views about the environment related to the inner cities and poverty. Her boss thought that her focus on urban environmental issues with a concentration on community organizing would align perfectly with Gaylord Nelson's Earth Day movement. Her boss at the foundation connected her with Denis Hayes and the rest of the Environmental Teach-In staff, where she accepted the role of midwest coordinator.

On Earth Day, Barbara Reid spoke outside of the General Electric shareholder's meeting in Minneapolis, Minnesota. Her speech, titled "Roots of Crisis," represented her view that corporations should be held accountable for contributing to the environmental crisis. These sentiments would be echoed in Environmental Teach-In, Inc. publications in the years that followed. "Corporations can no longer reject the demands of the people," she said, "We stand here today to let GE know that the people are aware of the mindless consumption of gadgets that it helps to foster. We stand here today to let GE know that such practices will be tolerated no longer. We stand here today to symbolize the death of those ecologically unsound practices and affirm life: for us, and for our children."

Peter Harnik spent his childhood in New York City before moving to Baltimore to attend college at Johns Hopkins. As a young man, he developed a love for hiking, cycling, and the outdoors. When the first Earth Day occurred in April 1970, Peter Harnik was finishing up his last year of college. Earth Day was a stimulant for Harnik's interest in the environment. After graduation, he moved to Washington D.C. to join Denis Hayes, Barbara Reid and the rest of the Environmental Action staff. He became a writer and editor for the EA newsletter, and eventually, the National Coordinator.

Peter Harnik discusses issues that he became involved with.

After the first Earth Day piqued Peter's interest in the environment, he became passionate and involved with many environmental issues. He was appalled by strip mining practices in West Virginia, he lamented the proliferation of automobiles and highway systems that cut through Washington DC wiping out entire neighborhoods. He leveraged his position in Environmental Action to steer the organization against corporate practices that were a threat to the environment. In his own words, "we were considered [to be] on the leftist fringe, the anti-corporate fringe of the environmental movement."

Like many other EA staff members, after he left the organization, he stayed heavily involved with environmental issues throughout the course of his life. "I've been hooked by the environmental movement," he said. His life-long interest in bicycling pushed him to promote rails-to-trails movements, which aim to convert unused railway lines into biking trails. After a long career in the environment, he is currently retired and working on a book about the rails-to-trails movement.

Each of the members of the Environmental Action National Staff of Earth Day played a significant role in the success and scale of the National Teach-In. Without their expertise, passion, and hard work, the impact of the Teach-In would not have been as great as we see it today.