Formation of ENACT at University of Michigan 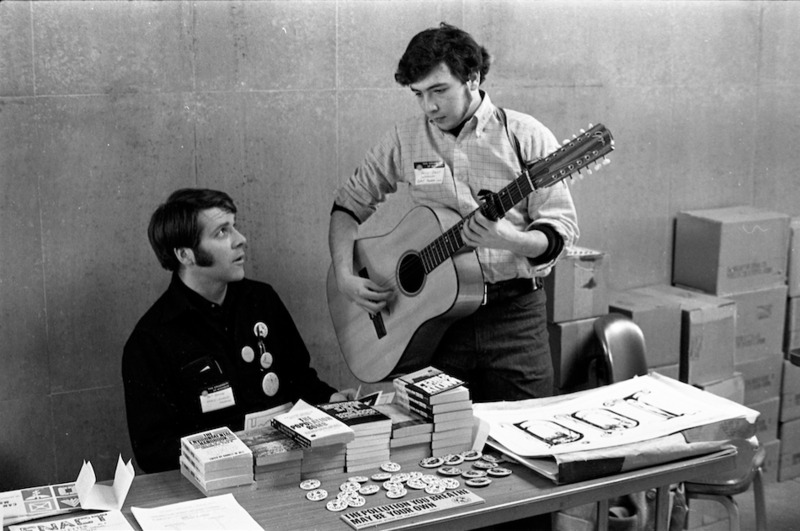 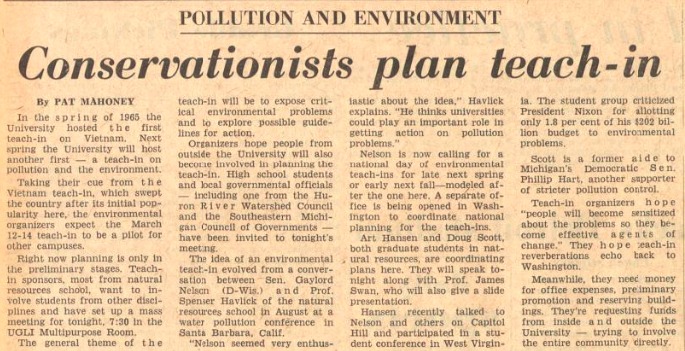 The planning of the ENACT Teach-In began in the fall of 1969, nearly 5 years after the first Vietnam Teach-In was held at the University of Michigan. Just a month before plans starting taking shape in October of 1969, antiwar activists held another Vietnam Teach-In in September of 1969, which brought in over 5,000 people. The students, faculty and Ann Arbor residents were well accustomed to teach-ins, giving ENACT both an advantage and disadvantage to planning its own. ENACT knew how a teach-in was supposed to function and the general outline from previous teach-ins, however with the large success of the Vietnam Teach-Ins looming over ENACT, the organization had their work cut out for them to even match the success of the Vietnam teach-ins. 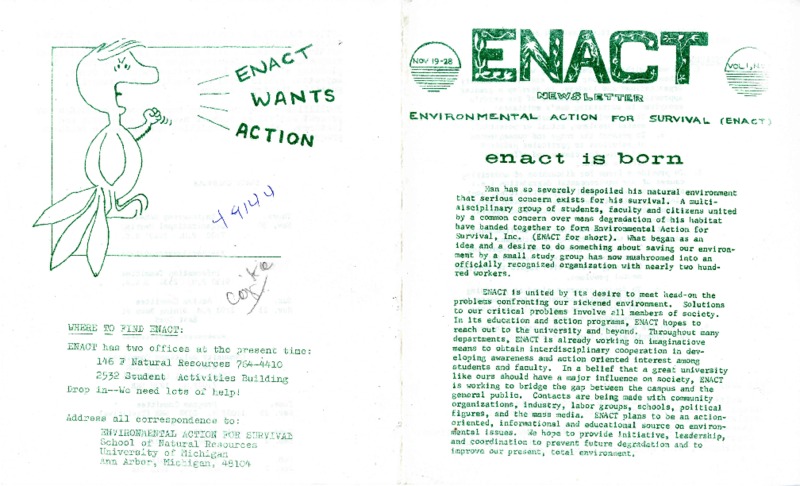 As the first ENACT newsletter stated, "man has so severely despoiled his natural environment that serious concern exists for his survival. A multidisciplinary group of students, faculty, and citizens united by a common concern over mans degradation of his habitat have banded together to form Environmental Action for Survival, Inc. (ENACT for short)." In October of 1969, ENACT officially formed from a small group of students who dreamed of bringing saving the environment. Quickly, the organization grew from a few students to hundreds of volunteers and workers.

The group first began with a small number of students, mostly graduate students involved in the environmental sciences. Of the first to join were Doug Scott, Dave Allan, and Art Hanson, all of whom were in the School of Natural Resources. Although these three men lead and coordinated the Teach-In, students from other disciplines were involved as well. Organizers came from all over the university like the Public Health students and faculty.

Support for the Teach-In came almost instantaneously after ENACT's formation. According to ENACT, "the Environmental Teach-In idea developed almost concurrently at two separate places in this country. Shortly after the first meetings here at Michigan concerned with such a teach-in, Senator Gaylord Nelson (Wis.), on October 15, issued a public call for a National Environmental Teach-In." With a national figure supporting and advocating for Teach-Ins across the country, ENACT's original idea for one fit perfectly in the national movement.

In 1970, the University of Michigan ran on a trimester system, causing the school to be out of session before the nation-wide Teach-In which was April 22nd. Therefore, ENACT held their Teach-In on March 11-14th instead, and acted as a prototype in planning the national event. With the whole country and national leaders looking to ENACT as an example, the members of ENACT got to work immediately to plan their Teach-In.

With the Teach-In only 8 months away, ENACT began working. Doug Scott and Dave Allan acted as co-chairs and with the amount of work that needed to be done, and Allan even took off a year from his Ph.D. program to dedicate his time fully to the demanding work of ENACT. According to Doug Scott's interview, Scott and Allen were given fellowships by the University of Michigan to work on the Teach-In exclusively for the calendar year. Scott had previously worked for Nelson before starting ENACT and in his role of co-chair focused on political outreach and creating a political movement from the Teach-In. Scott often worked with other political groups, companies, and the U of M to build coalitions and push environment legislation and ideas through the surrounding community and government. Allan was a graduate student and studying zoology at the time of the Teach-In. Within his role, he worked on community outreach and bringing people to present at the Teach-In. Art Hanson was another integral part of the Teach-In and acted as Treasurer of ENACT, forcing him to work intimately with all aspects of ENACT and the Teach-In, for he had to approve spending, create budgets, and help raise money.

Elizabeth Grant Kingwill on her role as a woman in ENACT

Many other students participated in ENACT and the Teach-In and held leadership roles, including students in the law school, medical school, Public Health school, and many more. Unfortunately, very few were held by women, reflecting the role of women in the early 1970s. Of the women who participated in ENACT, most held traditional women roles such as education roles and communication roles. In the beginning of ENACT, Sue Harding was the only female steering committee member and worked with 14 men. Although she was the Information & Education committee chair, she worked alongside Skip Lambert. As ENACT grew, more women joined the project and some took on leadership roles, like Elizabeth L. Grant who became chair of Community Relations. Despite having some female leaders in ENACT, men dominated the Teach-In, both in leadership and presenting. In her interview, Elizabeth Grant (Kingwill) reflects on her time in ENACT and states that she was "never one of the boys" and was never invited to the bar or considered equal to the other members. Despite this, at the time of the Teach-In, she never considered it an issue and continued her work in ENACT. Elizabeth Grant and many other women in ENACT shared similar experiences but stayed focus on the issue at hand, planning a Teach-In and saving the environment. Although female students were not as prominent in leadership positions, other women in non-student organizations were very influential in the Teach-In such as the League of Women Voters.

Students were not alone in their planning of the Teach-In, as many outside organizations helped raise money, offered advice, and raised awareness of the event and other forms of community outreach. Private businesses, volunteer organizations, governments, and universities participated in ENACT by donating money and time to the Teach-In. ENACT would not have been able to plan and fund the Teach-In without the help of outside organizations, for the Teach-In attracted thousands of people and cost thousands of dollars. On November 13, 1969, ENACT created a prospectus for the Teach-In in which Art Hanson included the proposed budget. Hanson predicted the cost of the event would be $43,100, which in today’s currency would be over a quarter of a million dollars. With the sheer size and cost of the Teach-In, ENACT was dependent on volunteers and outside groups to make it happen. ENACT received funding from not only the University of Michigan, which donated $5,000 to the organization, but also large corporations including Ford Motor Company, Dow Chemical, Detroit Edison, and other large companies. The donations from known polluters caused outrage from the radical left, but ENACT stuck towards its mission of saving the environment, even if it meant calling out their donors for harming the ecosystem.  The financial support from corporate donors such as Dow Chemical also indicated that these interests believed that they could co-opt the campus environmental movement, and even take advantage of the ecological crisis to promote and profit from technological solutions, which was a misunderstanding of the political energy behind ENACT and the broader Earth Day campaign.