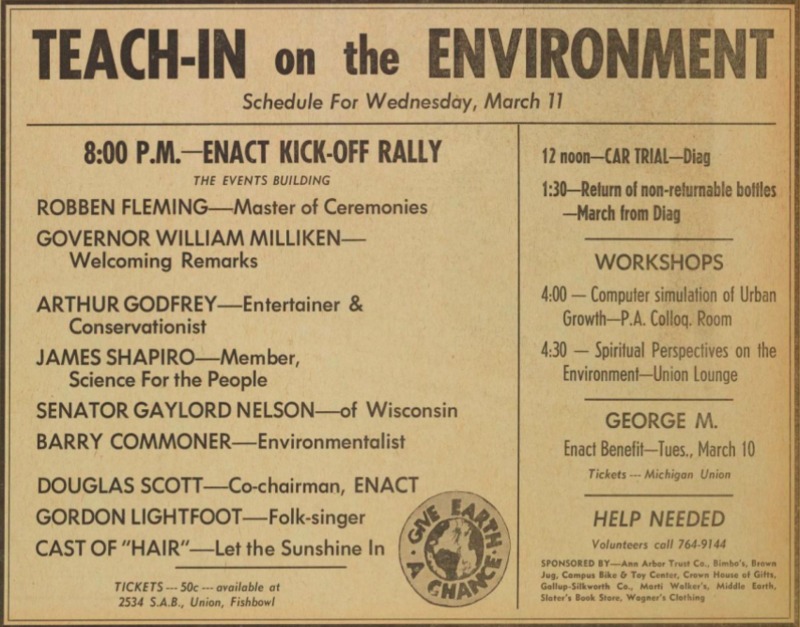 Schedule for first day of Teach-In

"After five months of planning, the University's environmental teach-in begins today with the first of over 125 planned workshops, seminars, speeches, and exhibits that will run almost continuously through Saturday night."

Although the official Kick-Off for the Teach-In took place on Wednesday, March 11, 1970, the initial events sponsored by ENACT began a day earlier on March 10. These included a symposium on environmental law held by the law school, a seminar on marine transport pollution, a seminar on Canadian environmental problems, a talk held by urban experts on "intellectual pollution," and an "Environmental Scream-Out." 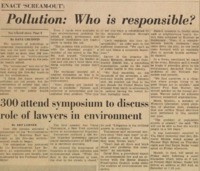 The Environmental Scream-Out was sponsored by ENACT and the Public Health School and planned by several Public Health students including George Coling, one of the ENACT Steering Committee members. The Scream-Out was "an open forum on intellectual pollution" titled "The Diversion from the Ghetto and the War." Three hundred people attended the Scream-Out, providing an open forum for audience members, faculty, and students to discuss aloud broad topics such as pollution, health care, Vietnan, racism, poverty, and population control.  Panelists and audience members also argued about whether corporations or consumers were most responsible for damaging the environment. 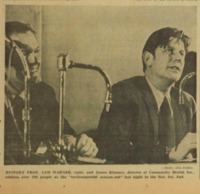 Speakers at the Scream-Out addressed the widespread concern that focusing on the environment might divert attention from other social issues. James Kimmey, the director of Community Health Inc., remarked that "it would be tragic if attention given to the environment distracted from the problems of the Vietnam war, racism, and poverty." History Professor Sam Warner seconded this view: "We find ourselves in a situation where groups trying to do good things are in conflict."  The Vanguard, a black student organization, had refused an invitation to the Scream-Out on the grounds that mainstream environmental activism ignored issues that directly affected black communities. Given Vanguard's opposition, George Coling recruited Marcia Pinkett, an African American student in the School of Public Health, to lead a new campus group called "Blacks for the Environment."  Through the Scream-Out, ENACT recognized the criticism from oher activist organizations and worked to increase multiracial alliances that would address the environment, Vietnam, civil rights, and poverty simultaneously. 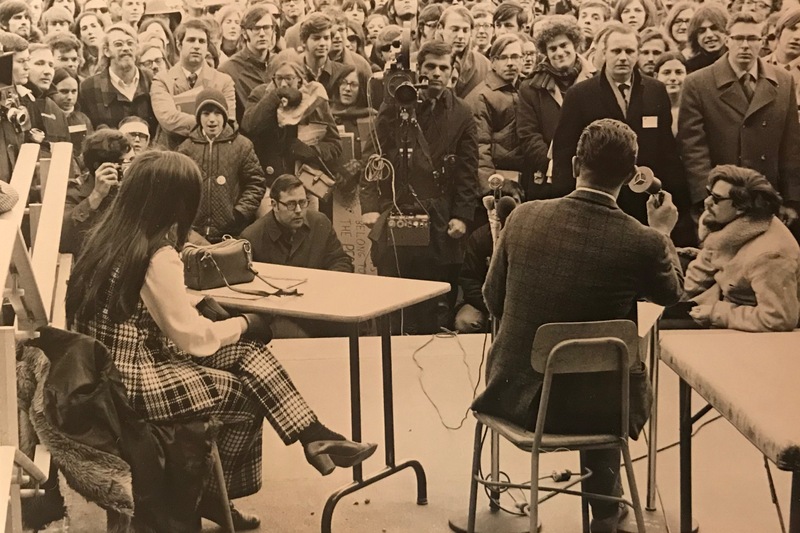 Trial against Cars on the Diag

As the official first day of the Environmental Teach-In, ENACT began the day with a Car Trial in the center of the University of Michigan Campus, the Diag. Hundreds of people gathered around at high noon to witness the trial against the car. The trial included several witnesses which testified on behalf of the car and against the car as well as a judge to oversee the proceedings. The trial concluded with a guilty sentence. Upon review of the evidence, it was "found the "four-wheeled monstrosity" [was] guilty of the murder of the American public, crossing state lines to pollute, inciting traffic jams, creating physical and psychological dependence, and discriminating against the poor." Nothing the witnesses could have said would have changed the judge's mind, and the audience seemed to be unfazed by claims that "the auto is the backbone of the American economy" and others like it. The guilty car had to face its punishment: execution.

Placed in the center of the diag, the car was beaten to death by those willing to participate. The car was hit with baseball bats and sledgehammers, as well as violently kicked. In the video on the left, a series of watchers were interviewed as they watched the car smashing. Of them, a 12-year-old boy who took off school to attend the Teach-In stated, " I think [the car smashing] is pretty good. The cars pollute a lot of the atmosphere and I think we ought to get rid of it..." A woman who attended believed the car smashing a good thing and more things like it should more often. Another man who was interviewed and simply said he thought the car smashing was fun and that he's "kinda big on bashing up cars legally." 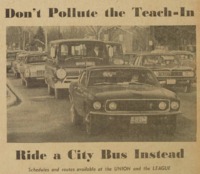 The Car Trial attracted a large group of people with diverse interests and reasons for attending. However, the dramatic display accomplished the ENACT's Teach-In goal of educating people on environmental issues. Although destroying a car in public seems reckless and pointless, it taught those who attended the danger of pollution caused by cars and the need to hold companies, people, and items that cause environmental degradation accountable for their actions.  During the Teach-In, ENACT also ran daily advertisements in the campus newspaper urging students and residents to take the bus rather than drive in order to do their part to minimize pollution. 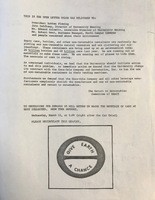 Following the execution of the car, demonstrators marched to the Ann Arbor Coca-Cola Bottling Plant carrying with them nearly 10,000 non-returnable cans. Once they arrived at the plant, the demonstrators dumped the cans onto Coca-Cola's front doorstep claiming " the company, as the largest beverage manufacturer in America, should take the lead in ending the production of non-returnable cans and containers."  ENACT also demanded that the University of Michigan administration exert pressure on Coca-Cola by refusing to sell any non-returnable containers in its beverage vending machines on campus. 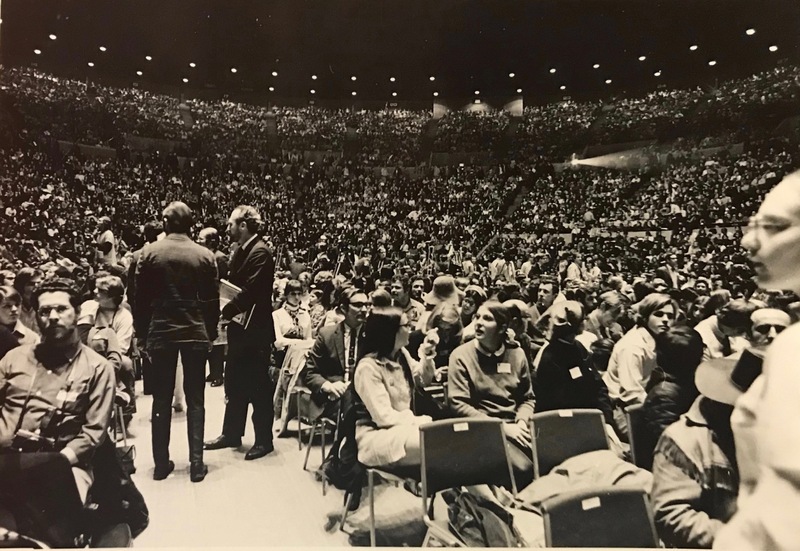 Kick-off of Teach-In at Crisler Arena

The official Kick-Off Rally took place in Crisler Arena at 8:00 pm on March 11, 1970. Days before the Kick-Off, ENACT volunteers sold tickets on the Diag, in the Fishbowl, and at the Union and the local YMCA for 50¢ apiece. Over 13,000 people filled the arena to listen to ENACT leaders and national figures speak as well as watch world acclaimed performers. Among the speakers was the President of the University of Michigan Robben Fleming, Michigan Governor William Milliken, actor Arthur Godfrey, geneticist James Shapiro, Wisconsin Senator Gaylord Nelson (the architext of the national Earth Day), ecologist Barry Commoner, and ENACT leader Doug Scott. The entertainment included Gordon Lightfoot, a popular folk-singer at the time, and the cast of the musical "Hair." 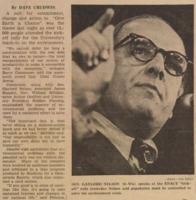 The theme of the Kick-Off, "Give Earth a Chance," was incorporated throughout the evening in speeches and the several performances that took place. According to the Michigan Daily, Governor Milliken, Arthur Godfrey, President Fleming, Shapiro, Senator Nelson, and Commoner all emphasized "the urgency of environmental problems and the need for a sustained effort to solve them." The speakers agreed that saving the earth was not for their own sake, but for all of humanity. National leaders such as Senator Nelson and Governor Milliken argued the fight to save the environment was not only a job for  the government but a job for everyone. Personal responsibility was necessary to preserve the environment and all levels of government and citizens needed to become involve and do their part. 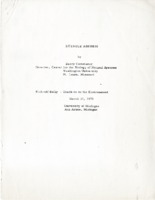 The Key-Note Speaker of the Kick-Off was Barry Commoner, a leading ecologist and a founder of the modern environmental movement. Like the other speakers, he addressed the issues currently plaguing the environment and the correlation they had with human technology and deliberate actions. The focus of his keynote address was not only about the environment but the purpose and importance of the Teach-In. He spoke both the importance of the teach-in and the intersections between the environment and other issues such as the Vietnam War and inequality. He stated,

"This teach-in epitomizes the remarkable convergence around the environmental issues of a number of earlier, separate concerns: conservation, the scientists' responsibility for the social consequences of science and technology, the consumer movement, the new generation's feeling for a more humane life-style, the businessman's worries over the impact of all of these industrial profits, the problem of the ghetto and urban decay, the anti-war movement, student activism against the nation's social and economic system. Somehow, the issue of environmental quality touches all these separate facets of the crisis of American society."

Ed Fabre of BAM at Kick-Off

Students also spoke at the Kick-Off including Doug Scott, the co-founder of ENACT and Ed Fabre, the leader of the Black Action Movement. Fabre unexpectedly spoke at the Kick-Off, a last-minute addition to the speaker line-up. In his speech, he demanded more black students be admitted to the University of Michigan and said "to many Americans, pollution is the bigotry, racism, and poverty in this country. The filth is not in our air but in our universities and legislatures." His speech echoed the concerns expressed by other black organizations on campus, that environmental issues existing in black communities were ignored in the environmental movement and that environmentalists often forgot about issues involving racism when focusing on the environment. Through his speech, it was clear that environmental movements had to be conscious of other social issues taking place in the world. 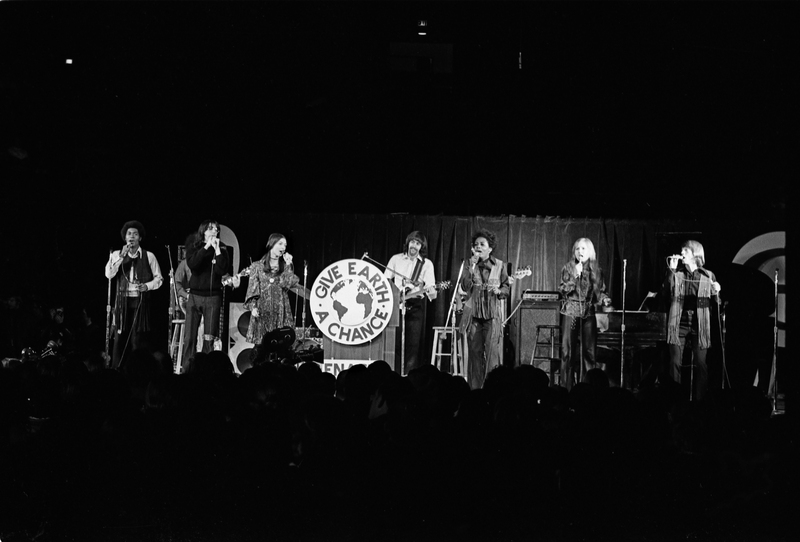 At the end of the Kick-Off, the Chicago cast of "Hair" performed in front of the 13,000 person crowd. Getting the cast of Hair and Gordon Lightfoot to come before was placed on the shoulders of ENACT co-founder, Dave Allan as well as other ENACT members, including Doug Scott's roommate. It was integral to the Kick-Off to have the entertainment to bring in students and the public. In interviews with Dave Allan and Doug Scott, they both describe the luck that was needed to convince the musicians to come to the Teach-In. If by fate, both Gordon Lightfoot and the cast of Hair agreed to come and perform and what seemed to be from little work or convincing. To Allan and Scott, the ease to find performers and speakers spoke volumes about the Teach-In itself. The mission to save the environment was spreading and fast. People all across the country were becoming more involved and wanted to help where they could. Even famous performers were willing to stop by a University campus if it meant making a difference, and it did. The Kick-Off Rally for the Environmental Teach-In was a huge success and brought in thousands of people. The success of the Teach-In would continue over the next week, as lecture, workshops, and demonstrations were held to educate the public on environmental issues.