Students at the University of Michigan plant the Environmental Action flag on a car.

April 22, 1970, finally arrived, a day on which people interested in environmental issues could become part of a larger movement. It was a day that activists could send a message that the environment needed protection. Environmental Teach-In, Inc., placed an advertisement in major newspapers labeling Earth Day a time to "reassess the ethic of individual progress at mankind's expense. . . . On April 22, we start to reclaim the environment we have wrecked."  Environmental Teach-In, Inc. staff had worked tirelessly for months to coordinate and organize thousands of events across the country, including 2,000 college campuses, 2,000 communities, and 10,000 high schools. The sheer variety of events planned was astonishing and only possible because local organizers took the lead under the decentralized Earth Day model. Activists held teach-ins, speeches, debates, demonstrations, protests, burials for automobiles, and many more events nationwide.  An estimated 20 million people participated, making Earth Day the largest political demonstration to that point in U.S. history. 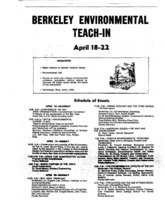 Across the country, college campuses, high schools, and cities had planned events for the days leading up to Earth Day, and the day itself. Berkley, California had been particularly supportive of the environmental movement. A few months before Earth Day, students at UC Berkeley had gone so far as to bury a car on campus grounds to protest “ecologically insane behavior.” As Earth Day approached, events with varying subjects were planned between April 18-22. Some events focused on local Bay Area issues, while others approached the environmental crisis through a national lens. On Sunday, April 19, students from UC Berkeley’s College of Environmental Design opened their Environmental Fair, a four-day event that featured, among other things, a population squeeze maze that was meant to physically demonstrate the lack of space on the Earth as a result of population growth. Each day leading up to Earth Day was filled with events put on by university professors, students, state assemblymen, and citizen’s groups on topics ranging from urban ecology to the Vietnam War and its environmental implications. A few hundred miles south in Los Angeles, UCLA had also planned forums and speeches for the days leading up to Earth Day. On that Monday, students hosted events that were focused on pollution, poverty, federal environmental programs, and transportation. United States Senator Alan Cranston addressed the general environmental problems and the nation’s health needs, while panels assembled to discuss population issues.

Events not only took place on the West Coast but in the middle of the country as well. The Courier Journal and Times, a newspaper from Louisville Kentucky, reported that events were planned at universities across the region. At Western Kentucky University in Bowling Green, the teach-in ran from Monday Morning to Wednesday night and featured the science editor from Time Magazine as its keynote speaker. Eastern Kentucky University organized a one-day teach-in on Earth Day where the President of the university spoke and introduced a diverse array of speakers that included university staff members, local conservationists, representatives from the Army Corps of Engineers, and more. Cities, universities, community colleges, and communities organized their own Earth Day events. Local autonomy was a key aspect of the events. According to Barbara Reid, Earth Day had the ability to transform people into activists.

On the East Coast, cities like Boston, New Haven, Providence, and Hartford organized city-wide activities to support Earth Day and the environmental movement. Events would take place later in the day in an effort to involve the whole community: working-class people as well as students and professionals. In these East Coast cities, there was a focus on urban environmental problems, such as lead paint, abandoned cars, and poor highway planning. There was a distinct effort to include poor and minority communities in the events to ensure that their issues were not omitted.

in Denver on Earth Day.

Due to the sheer number of events planned, Environmental Teach-In, Inc. functioned as a coordinating body, rather than directly planning events in cities. There were just too many events in too many cities for that to be effective. Nevertheless, they did not rest on their laurels. On Earth Day, the staff was out across the country speaking at events and supporting local groups in whatever ways they could. Gaylord Nelson gave several talks on Earth Day. In Denver, Gaylord Nelson delivered a speech in which he connected the environment to many of the problems the US was facing at the time. "Environment," he said, "is all of America and all of its problems." He pled the case that environmental activism should not be left out of the broader activism movement sweeping the nation during this era.

“Earth Day can, and it must lend a new urgency and a new support to solving the problems that still threaten to tear the fabric of this society… the problems of race, of war, of poverty, of modern day institutions… Ecology is a big science, a big concept, not a copout.”

National Coordinator Denis Hayes remained in Washington D.C. on Earth Day, where he gave a speech at the Sylvan Theater. In this speech, he chastised industry for feigning contributions to the movement. From his perspective, a corporation solved its pollution problem by handing it over to its public relations team. The status quo was totally unacceptable; something needed to change. That was where Earth Day came in. “We are building a movement,” he said, “a movement with a broad base, a movement which transcends traditional political boundaries. It is a movement that values people more than technology, people more than political boundaries, and political ideologies, people more than profit. It will be a difficult fight. Earth Day is the beginning.”

Adam Rome, The Genius of Earth Day: How a 1970 Teach-In Unexpectedly Made the First Green Generation