III. Environmental Activism in Michigan in the 1970s 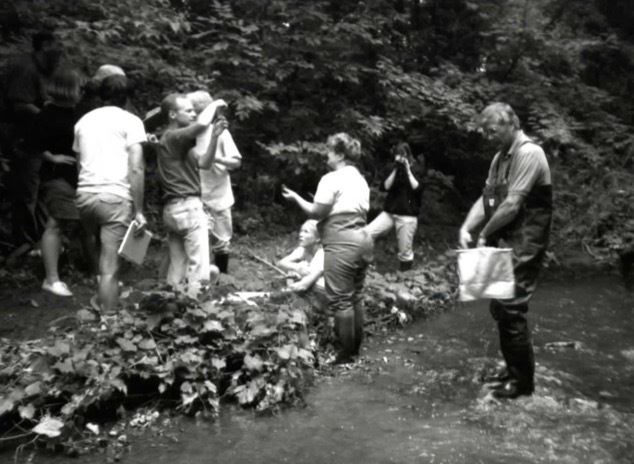 Volunteers participate in a river clean up as part of the

Following the first Earth Day, protecting the environment became a political and moral responsibility for many citizens in Michigan and around the country.  Driven by newfound knowledge about the environment and fear about its degradation, activists challenged the government and industry for neglecting the environment and questioned the authority of scientists and mainstream conservation groups. To structure their efforts, they banded together to create environmental organizations that addressed community concerns. Grassroots activism directed by individuals and these groups propelled environmental issues into the public consciousness and into policies at every level of government. Not only had Earth Day inspired a new wave of citizen activism, but it also unified environmental concerns and helped define the modern environmental movement. This section of the website highlights three facets of citizen activism in Michigan during the 1970s: the advent of the citizen lawsuit with the Michigan Environmental Protection Act (MEPA), community-driven environmentalism at the Ecology Center of Ann Arbor, and the debate about nuclear power in Michigan.

The 1970 Michigan Environmental Protection Act (MEPA) was the result of fierce citizen activism and paved Michigan’s path to a healthier environment. This landmark piece of legislation defined the environment as part of the “public trust” and enabled citizens to bring suits against the government and corporations whose policies might lead to environmental degradation. Written by University of Michigan law professor Joseph Sax at the request of the West Michigan Environmental Action Council, the bill became law because of the grassroots lobbying efforts of the WMEAC and dozens of other environmental groups across Michigan. Under MEPA, citizens would have a voice in decisions about how the environment should be treated. Once Governor Milliken signed it into law, environmental groups and concerned citizens alike began to use the new tool to question government agencies’ decisions, leading to contentious disputes in court that sometimes took years to resolve.

The Ecology Center of Ann Arbor

Established in 1970, the Ecology Center of Ann Arbor served as the center of environmental activism in Ann Arbor. ENACT originally founded the Ecology Center as a way to foster a sense of community and provide a location for environmental groups to collaborate. Its central responsibility, however, was to educate the community on environmental awareness, a continuation of the mission of the teach-in. The Ecology Center provided fact sheets, brought in speakers, and hosted events to better educate the Ann Arbor community on sustainable living. The diversity of their programming attracted many people from the University of Michigan, the State of Michigan, and throughout the United States. The original idea shared by ENACT co-chairs Art Hanson and David Allan was that individuals in every city or township in the United States could work together to learn how they could live in a more responsible and sustainable manner. As one of the first ecology centers in the country, the Center in Ann Arbor proved to be a model of how environmental activism could engage a community and make a positive impact in the world.

The anti-nuclear movement grew alongside the environmental movement and peaked in the 1970s. Anti-nuclear activism emerged across different political landscapes, both in Michigan and eventually the entire United States. The nuclear power plants that were under construction in the 1960s raised safety concerns and induced public fears of a possible reactor incident that would release a great amount of radioactivity into the environment. The United States also maintained a program of nuclear weapons testing between 1945 and 1992. As part of this testing, the U.S. military conducted around 1,000 nuclear tests in the aftermath of the atomic bombing attacks on Hiroshima and Nagasaki. After the U.S. signed the Partial Test Ban Treaty in 1962, nuclear weapon testing continued underground, and toward the end of 1970s, anti-nuclear activism converged with anti-war activism and with the grassroots environmental activism that was gaining momentum.