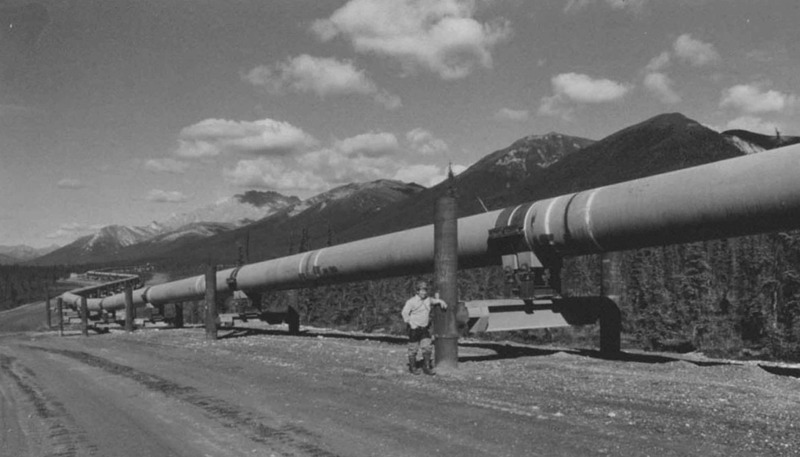 Professor Joseph Sax on the power of the citizen lawsuit provision, 1970

The passage of the Michigan Environmental Protection Act (MEPA) of 1970 and, more specifically, the citizen-suit provision, represented a massive victory for environmentalists across the state of Michigan. The lawsuit weapon forced government agencies to take seriously the environmental concerns of ordinary citizens, which encouraged community organizing and action. In this 1970 video "The Environmental Lawyer," produced by the University of Michigan Television Center, MEPA architect Joseph Sax argues that filing public interest lawsuits could be successful in mobilizing environmental activism even if the organizations lost or had to compromise in the end.  The lawsuit represented "a way of mobilizing public opinion, bringing a community together and organizing them around an issue, and forcing that issue into public attention."  Sax recognized that grassroots organizations faced major obstacles in lobbying legislatures to act, but "if you file a complaint, the court must listen to you."

Sax believed that, regardless of the ultimate outcome of environmental lawsuits, citizens across the nation "want, and need, an opportunity to have their day in court; rather than the back-of-the-hand, or public relations approach they have all too often received at the hand of the bureaucrats." Yet even under MEPA, environmental lawsuits often resulted in compromises rather than outright victories, and Sax himself recognized that "despite the impression that a casual reader of news reports may have, the struggle for the right to a decent environment has not yet been won."

In 1971, Michigan Congressman John Dingell proposed a federal law that would extend the citizen lawsuit provision of MEPA into national policy and remove many of the existing obstacles to court action by private environmental organizations. Filing federal lawsuits under the National Environment Policy Act remained an expensive endeavor and demonstrating standing (that a plaintiff has suffered the harm required to sue) often proved difficult. Further, most lawsuits only succeeded in modifying or delaying environmentally hazardous projects that government agencies ultimately approved. Dingell's bill sought to amend NEPA by giving citizens "a fundamental and inalienable right to a healthful environment" and allowing class action lawsuits to punish corporations and government agencies whose actions violated this right through pollution of air, land, and water.  The Nixon administration opposed this policy because it would allow citizens to sue for monetary damages for "any pollution of air or water," even if a government agency had approved the project. Nixon's Council on Environmental Quality argued against "damage claims for pollution-caused injury" and emphasized that NEPA's requirement of an environmental impact statement was sufficient because it enabled private watchdogs to go to court to force government agencies to carry out environmental impact assessments in good faith.

On May 7, 1971, Representative Dingell convened a hearing in Ann Arbor, Michigan, proclaiming that "it is vitally important for citizens to involve themselves in the democratic process." "Those representing the public interest" have the right to be heard in court, and "those who would make use of public resources such as air, water, and land also have an obligation to show that their project would not unreasonaly degrade these priceless resources." Many of the key actors in the formation and passage of MEPA, including Representative Thomas Anderson, Professor Joseph Sax, and former West Michigan Environmental Action Council Chair Joan Wolfe, testified at the hearing. Representatives from influential environmental groups, including ENACT, the U-M Environmental Law Society, the Ecology Center of Ann Arbor, the United Auto Workers, the League of Women Voters of Michigan, and many other citizen activists also appeared.  These groups reiterated the democratic necessity of "provid[ing] a forum where the individual citizen can be heard on equal terms with those whose activities devour our natural resources and where the citizen's right . . . is equal to that of those who represent private property." The limited number of legal precedents ensured that this fight for citizen representation, even in environmental issues that directly impacted their lives, would necessitate passion and persistance from thousands of individuals and grassroots organizations across the country. 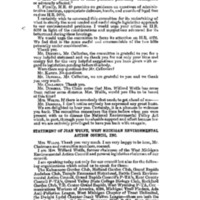 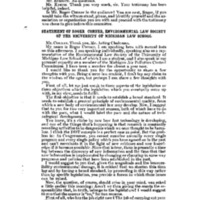 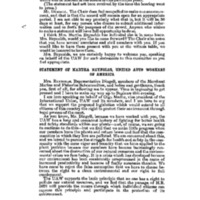 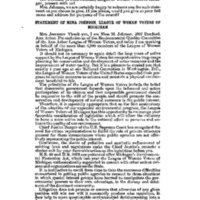 "But, you know, the other response, instead of fighting back, is to fall back into apathy, to give in, to become more alienated, and I would submit to you that when people do that, that one element, one more element of their humanness, the will to struggle is gone. That is why I submit to you that this proposed legislation represents an extraordinary idea. It is about people and about life and that's why it is important." - Roger Conner, U-M Law Student 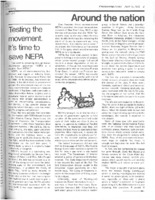 During the early 1970s, John Dingell repeatedly proposed the amendment to expand NEPA by allowing citizen lawsuits for environmental damages but failed to overcome opposition from the Nixon administration and its allies in Congress.  Instead, environmental organizations had to fight repeated battles to defend the NEPA provision that enabled private groups to initiate court action to force government agencies to implement the law that required environmental impact assessments of all major projects. Environmental Action, the coordinator of Earth Day, warned in 1972 that NEPA was under dire threat from corporate lobbyists in every major sector: "the utilities, the nuclear industry, the steel, paper, and chemical companies and other major water polluters, and the highway lobby, . . . all those to whom the status quo has meant profits, progress, and pollution."  Environmental groups had deployed NEPA in court to "delay destructive federal projects" and to force federal agencies traditionally allied with corporate polluters to "assure that proper consideration is given to environmental considerations."  Environmental Action also recognized that many members of Congress as well as President Nixon had not fully realized how potent the citizen lawsuit provision would become when NEPA passed so overwhelmingly in 1969.  NEPA had "provided the environmental movement with the very teeth it was never supposed to develop."

Environmental Lawsuits in the 1970s 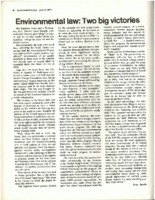 During the 1970s, the defenders of NEPA in Congress and the environmental movement prevailed in the battle to maintain the right of private citizens and groups to file lawsuits to demand federal enforcement of environmental protection laws.  Every other landmark federal environmental statute during this era--the Clean Air Act Amendments of 1970, the Clean Water Act of 1972, and the Endangered Species Act of 1973--contained similar provisions that required federal agencies to conduct environmental impact studies and therefore allowed watchdog organizations to file lawsuits to enforce these laws. These provisions allowed environmental groups to have their voices heard, but citizen plaintiffs faced other difficulties when they entered the courts. Although environmental groups won some legal victories, such as the ban of DDT, more often than not, these groups could modify or delay environmentally hazardous plans but could not stop them outright. 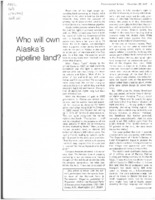 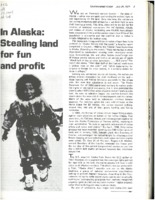 In 1970, the historical clash between Alaskan natives and the U.S. government about property ownership and the burgeoning fight between environmentalists and industrialists coalesced in a legal dispute over the construction of a trans-Alaskan oil pipeline. Since Russia first “sold” Alaska to the U.S. in 1867, ownership of the 365 million acres of property has been a contested subject, and the abundance of natural resources, including gold and oil, the so-called “black gold,” exacerbated the debate. In 1958, President Dwight D. Eisenhower signed the Alaska Statehood Act, which gave title “to any lands or property” to the “Indians, Eskimos, or Aleuts.” Another part of the Act, however, allowed the state to choose 103 million acres from the “public domain,” which included the land allotted to the natives. The state chose land based on economic promise, including 2 million acres of North Slope territory “on which the state sold oil leases for $900 million” and from which the proposed 4-foot-diameter pipeline would flow almost 800 miles. After publishing their choice of the land in “a small newspaper rarely read by natives,” the state ascertained title. In the following years, native people and opposed politicians worked to protect native rights from further injustices by implementing “land freeze[s]” to delay the state’s assumption of millions of acres of Alaskan land. Environmentalists also had a stake in this debate and mobilized to halt the pipeline project by emphasizing the environmental impacts of the pipeline itself, including "damage to fragile arctic ecosystems which may results in disruption of wildlife habitats and the melting of arctic permafrost" as well as the potential hazard of leakages.

“Regardless of who owns the land, the power to safeguard the delicate ecology of the Alaskan tundra rests with the public, since no government agency properly carries out this duty. If the citizen outcry is loud enough, especially from those living in Alaska, neither the federal nor the state governments will find it possible to allow industrialists greedy for profit to rape Alaska’s land and people.” - Environmental Action 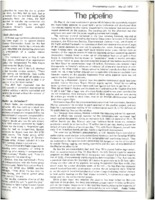 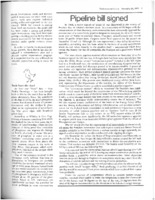 Three environmental groups, Wilderness Society, Environmental Defense Fund, and Friends of the Earth, took the issue to court. After the Interior Department published its nine-volume environmental impact statement for the pipeline project, the three groups "worked frantically to reproduce at their own expense thousands of pages of the scarce statement to send out to scientists for review." These scientific reviews revealed a number of major concerns ignored or omitted from the statement, including the negative impacts on migrating caribou and the harms caused by oil spills historically. Seven days after submitting these rebuttals, "an oil feverish administration" gave industrialists "a green light"  to start the project. However, the environmental groups "in a surprise move" filed a claim that the oil companies violated the Mineral Leasing Act of 1920, which limited the width of the pipeline's construction corridor. Although these legal efforts effectively delayed pipeline construction, "five years, several lawsuits and untold hours of public debate later," Congress approved the project in November 1973. This represented "a clear defeat for environmentalists," but some unexpected victories also arose out of the controversy and would "remove some of the bitter taste from environmentalists' mouths." The final blll placed a strict damage liability on the pipeline's owners and operators, required Senate approval of heads of two regulatory administrations, and listed strict provisions on business and trade practices. Ultimately, the pipeline controversy in the early 1970s became emblematic of the battle that environmentalists waged, the obstacles they faced, and the reality that delaying or slightly modifying a project proved more likely than stopping it altogether. 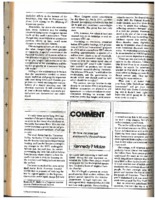 The TVA-Snail Darter controversy of the 1970s, like the Alaska pipeline saga, demonstrated that even when environmental groups won the legal battle to enforce federal environmental protections they were vulnerable to losing the political war.  This saga began in 1967 when Congress approved funds for the Tellico Dam on the Little Tennessee River east of Knoxville.  The Tennessee Valley Authority, a federal agency, planned to turn thirty miles of the free-flowing river into a reservoir through a dam that would generate hydroelectric power but also was designed to facilitate vacation-home developments and motorboat recreation (environmentalists charged that the TVA's real purpose was "land speculation").  With the project underway, environmental groups mobilized to stop the project by filing the first major litigation under the Endangered Species Act of 1973, after discovery that the dam would cause irreparable damage to the ecosystem of the snail darter, listed as an endangered species in 1975.  In 1978, with nearly $100 million already spent, the U.S. Supreme Court ruled that construction must stop on the Tellico Dam because the Endangered Species Act explicitly required federal agencies to halt actions that would "result in the destruction or modification" of the habitat of an endangered species.  The U.S. Congress promptly amended the Endangered Species Act to create a committee that would evaluate the economic consequences of enforcement and could recommend exceptions.  President Jimmy Carter, despite his environmental platform, signed the subsequent congressional legislation that enabled the completion of the Tellico Dam and resulted in the destruction of the snail darter species of that region.

"Environmental Quality," Hearing before the Subcommittee on Fisheries and Wildlife Conservation, Committee on Merchant Marine and Fisheries, House of Representatives, June 13, 1969 (Washington: GPO, 1969)

"Environmental Citizen Action," Hearings before the Subcommittee on Fisheries and Wildlife Conservation, Committee on Merchant Marine and Fisheries, U.S. House of Representatives, May 7, 1971 (Washington: GPO, 1971)

Council on Environmental Quality, "A Citizen’s Guide to the NEPA: Having Your Voice Heard," 2007, https://energy.gov/nepa/downloads/citizens-guide-nepa-having-your-voice-heard-ceq-2007