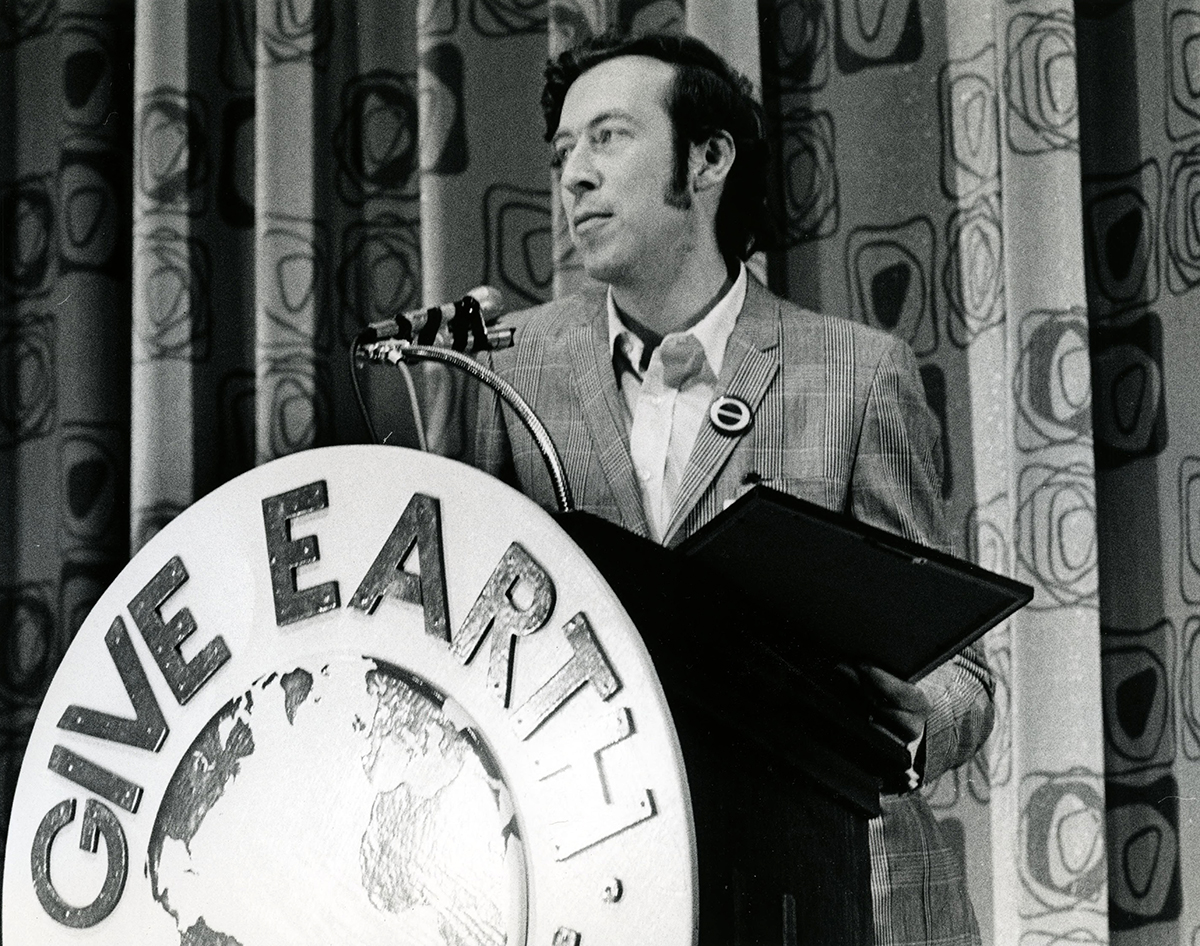 The Environmental Action for Survival (ENACT) Teach-In at the University of Michigan in March 1970 and the national Earth Day demonstration on April 22, coordinated by the Washington, D.C.-based Environmental Action, demonstrated the growing connections between campus activists, local environmental groups, and national environmental organizations.  This exhibit explores the environmental movement on the U-M campus, in the Ann Arbor community, across the state of Michigan, and throughout the nation during the 1960s and 1970s.  The new ecological consciousness and the widespread sense of an "environmental crisis" shifted the political culture from conservation toward preservation of natural resources and propelled issues such as clean air and water, toxic chemicals, nuclear power, recycling, and environmental justice to the forefront of national debate.  While the presidential administrations of Lyndon Johnson and Richard Nixon embraced the cause of environmental reform, and the U.S. Congress passed a series of landmark environmental protection laws in the early 1970s, environmental activists consistently demanded tougher enforcement and stricter regulations on corporations and government agencies that degraded the natural environment and quality of life.

Part I: Origins examines the movement to protect national parks and lakeshores in Michigan and the United States, the environmental policies of the Johnson and Nixon administrations, the key episodes in the "environmental crisis" of the late 1960s, and the grassroots mobilization of women's groups, campus activists, and other citizens.  Part II recounts the formation of ENACT at the University of Michigan, the events of the March 1970 teach-in, the national mobilization for the first Earth Day coordinated by Environmental Action, and its campaigns for environmental justice and protection in the early 1970s.  Part III explores three areas of environmental action in Michigan during the 1970s: the alliance between grassroots activists and U-M Law Professor Joseph Sax that produced the nation's most expansive citizen lawsuit provision to protect the environment, the formation and early intiatives of the Ecology Center of Ann Arbor, and the struggle between nuclear power production and anti-nuclear activists in the state and beyond.  Part IV focuses on the politics and policies of clean air and water, including the compromises that led to passage of the federal Clean Air Act of 1970 and Clean Water Act of 1972 and battles over automobile industry pollution and environmental contamination of the Great Lakes and the Huron River in Ann Arbor.  Part V: Legacies assesses the consequences of this era in Michigan and U.S. history, including interviews with leaders of ENACT and Environmental Action about what they did after Earth Day and how their activism mattered, and conclusions by members of the Michigan in the World research team about the significance of this history and the meaning of this collaborative research project.

Sources and Citations: To accompany the historical narrative, the "Give Earth a Chance: Environmental Activism in Michigan" exhibit reproduces more than six hundred historical documents to allow the audience to explore original sources and multiple perspectives in more detail. These include full-text documents from U-M archival collections and online government databases, dozens of photographs and video documentaries produced by U-M News and Information Services and the U-M Television Center, and excerpts from nine videotaped or audiotaped interviews with leaders of ENACT, Environmental Action, and the Ann Arbor Ecology Center.  The majority of these materials come from the archives of the Bentley Historical Library at the University of Michigan, including the newspaper stories found in the Michigan Daily Digital Archives.  Other images and documents come from the Joseph A. Labadie Collection in the Special Collections Library at U-M, from the newsletters of Environmental Action, and from public domain sources such as the National Archives, Public Papers of the Presidents, and U.S. Congress hearings.  All images, documents, and interviews reproduced in this exhibit are either in the public domain or used with permission, with full citations provided.  We are particularly grateful for the permission of leaders of Environmental Action and ENACT to reproduce historical documents that they created.  The copyright for individual images and documents remains with the original source and not this website, meaning the materials in this exhibit that are not otherwise in the public domain can be cited and linked but not reproduced elsewhere without permission.

Readers can view larger versions of photographs and documents by clicking on the smaller embedded exhibit thumbnails and opening up individual source pages.  Multi-page documents, and higher-resolution pdf files, are available in full through the "Document Viewer" function by scrolling down to the bottom of the source page.  The "Sources" section at the bottom of each exhibit page contains general bibliographic information as well as the full citations for all video clips and interviews.  Complete citations for all other individual text documents and photographs can be found by clicking/enlarging the embedded image and then consulting the "Source" line of the source page, just below the enlarged image.  The "Citation" link at the top right of each source page is not the full original document citation but rather provided for viewers who wish to cite a particular part of this exhibit.