Ecology Center Initiatives in the 1970s 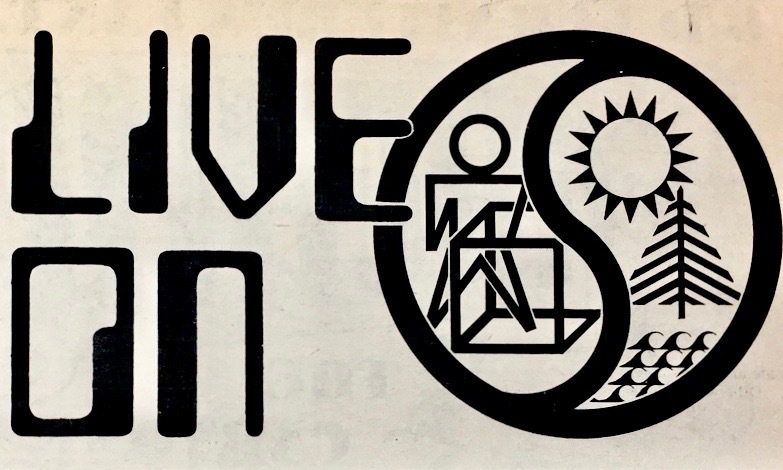 What was to happen after the Teach-In? The event brought awareness to environmental issues and promoted activism in the community. As such, the Ecology Center sought to harness this enthusiasm for environmental activism. Since their founding in 1970, they helped jumpstart initiatives that promoted sustainability in the local Ann Arbor community. Additionally, they were instrumental in certain lobbying efforts for local and state-wide governments. After the Ecology Center grew, they became involved in activism in the Detroit area—it was not solely based in Ann Arbor. With increasing scientific data regarding climate change and a more integrated world, the Ecology Center began focusing on more large-scale efforts. This included participating in global climate change efforts, as well as working with some world-renowned companies. 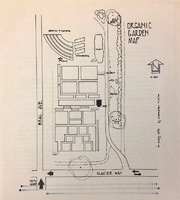 Layout of the Ann Arbor

In 1971, the Ecology Center created the Ann Arbor Community Garden to educate the local community about organic gardening practices. Many different groups of people made trips to the Community Garden ranging from the Girl Scouts to people in rehabilitation programs. While the Ecology Center of Ann Arbor founded the Garden, students and faculty at the University of Michigan, as well as thousands of volunteers from the Ann Arbor community visited to tend to the crops. One of the Garden's primary goals was to show residents that chemical pesticides and fertilizers were unnecessary when growing food. The Ecology Center, after receiving a grant, created an education program that would teach Ann Arbor residents about responsible, organic gardening practices. Although a community garden was a foreign concept to many Ann Arbor residents, they quickly formed attachments and frequently volunteered.

"At first they all shuffled around with sour expressions on their faces, and I was uncertain how I could relate the garden to these young people. None of them wanted to work and get dirty. Then one of the young girls started digging a melon hole and a few minutes later, they all wanted to show that they could do it better... The group stayed all morning and learned a few of the basic concepts of organic gardening." -John Remsberg, Garden Manager

The Ecology Center collaborated with the University and used part of a farm on North Campus for planting an organic garden. The segment of this farm had fruit trees, apple trees, grape vines, and several other roots. Bob Zahner, a soil scientist at the School of Natural Resources, developed a teaching and demonstrative organic garden. Community members became excited by this movement and were eager to grow their own food; thus, the Ecology Center helped Ann Arbor residents by finding abandoned or unused land to be used for gardening. This was not one of the Ecology Center's central initiatives, but it is an example of how it sought to work with the community to promote sustainable living. After operating for approximately twenty years, the University ultimately designated this area for the Gerald R. Ford Presidential Library.

Also established in 1971, the Bike-A-Thon became the Ecology Center's largest fundraising event. First collaborating with ENACT and the Ann Arbor Bike League, the Ecology Center sought to promote sustainable living through an alternative mode of transportation. Hundreds of Ann Arbor residents and their families participated in this annual event. The riders in the Bike-A-Thon collected sponsorships of a certain dollar amount from their neighbors, family, and friends that would be paid after every completed mile. The accumulated sponsorships went towards supporting the Recycling Station, community education programs, lobbying governmental officials on environmental issues, and many other programs. 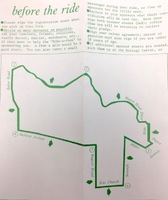 Map of the bike route 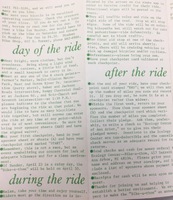 Instructions for the riders 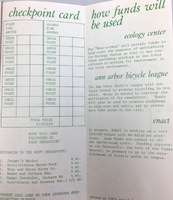 Sponsor card and information about where the proceeds will go

Mike Schechtman served as the director of the Ecology Center from 1971 to 1973. Part of his role as director meant advocating for or against statewide policies. Many of these policies impacted Ann Arbor; therefore, as the focal point of the environmental movement in Ann Arbor, he facilitated lobbying efforts. Schechtman also worked with the Michigan Student Environmental Confederation by serving on their board. While there were not many issues that directly impacted the Ecology Center of Ann Arbor, he and his colleagues believed that it was important to work on state-wide environmental lobbying efforts.

In 1974, the Ecology Center and the Parks and Recreation Department of Ann Arbor worked with the Beautification Committee of Ann Arbor's Sesquicentennial Commission to plant more trees throughout the city in honor of Ann Arbor's 150th anniversary. A disease outbreak that affected elm trees prompted this tree planting movement. After all, Ann Arbor is known for its many trees; thus, one of the major goals of this Committee was to improve upon and maintain the parks of Ann Arbor by replenishing the city's groves. The Ecology Center provided thousands of evergreen tree seedlings to be planted. Residents, in turn, could honor someone by making a donation in their name to the Ecology Center. Most of the seedlings, subsequently, were planted in the Sesquicentennial Grove in the Geddes Park Area.

Modeled after Earth Day, the Ann Arbor community joined several other cities across the country by hosting Sun Day in 1978--an event that discussed alternative energy sources with a focus on solar energy. The idea for the event stemmed from President Jimmy Carter's mission to move the United States from consuming fossil fuels to investing in renewable energy sources. What is particularly unqiue about Sun Day, is that it was a one-time occurence, unlike many other environmental awareness days or movements. This is because most consumers were uneducated about the developing role of solar technologies; thus, the event's chief sponsor, The Solar Action Inc., sought to excite and educate Ann Arbor residents. In turn, they sponsored the event for $150,000 (more than $500,000 in 2017 dollars). Other Sun Days across the country had unique features such as jobs forums, bike rides, and hikes. 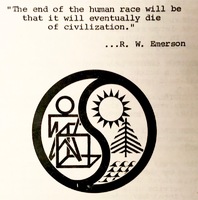 The Ecology Center was extremely versatile. They worked on many projects for fundraising events, lobbying, and fostering a sense of community amongst Ann Arbor residents. The Ecology Center grew from an aftereffect of the Teach-In and became a staple of Ann Arbor. After the initial responsibility of serving as an educational source for the community, the Ecology Center became involved in more recycling efforts, advocacy for the Bottle Bill, opposition to nuclear power plants, and many others. Additionally, they pursued efforts based in Ann Arbor, as well as in Detroit and the rest of the state. The quote on this pamphlet— "The end of the human race will be that it will eventually die of civilization" — encompasses the Ecology Center's efforts. They sought to reinvigorate a sense of community and civic duty through environmental programming. By using the words of the famous Ralph Waldo Emerson, the Ecology Center proved that its goal was to better the world.

The Ann Arbor Sesquicentennial Journal, no. 4, 1974