ENACT Advertisement for Day 4 (March 14) of the Teach-In

The fourth and final day of the Environmental Teach-In was filled with workshops, lectures, and protests. Prominent environmental leaders like Ralph Nader and Mayor Richard Hatcher spoke on the future of man and the role of humans in the environmental crisis, and ENACT organized a walk along the Huron River in protest of pollution. Although the Teach-In was coming to a close, the lessons from the Teach-In carried on a month later when schools nationwide used the University of Michigan as a prototype to base their Teach-Ins on. Even after Earth Day came and went, the effects of the Teach-In were felt for decades to come, and remain relevant today. 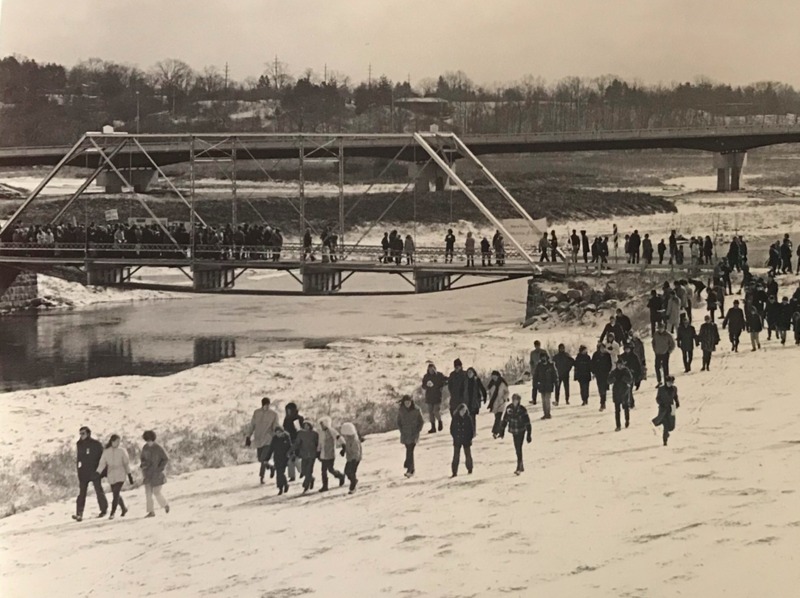 The last day of the Teach-In began with the Huron River Walk which started at Huron High School and ended alongside the river. The walk began after Senator Phillip Hart, Senator Muskie, David Brower, and Barry Commoner spoke about pollution in and along the river. University students and Ann Arbor citizens participated in the walk, some carrying signs and others taking the opportunity to talk to their representative and environmentalists about pollution. By walking along the river, participants could see both the beauty of nature and the effects of pollution.

ENACTs philosophy revolved around responsibility, knowledge, and action. Talking to the people about pollution armed them with the knowledge of how to help and fix the problem. Reinforcing this knowledge by showing them the problem existed in their own backyard, the goal was to drive people to action and motivate them to help clean and save the polluted rivers near them like the Huron River. 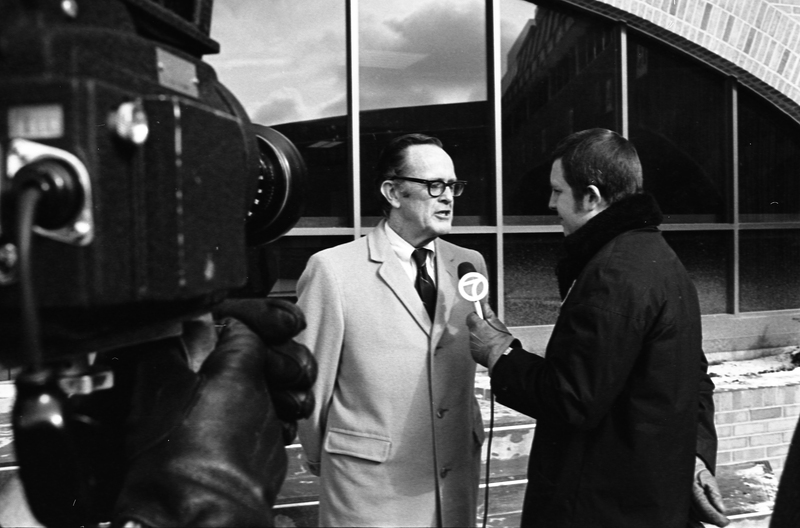 Senator Philip Hart of Michigan participated in the Huron River Walk after missing his scheduled appearance at the Eco-Rally the day before because of a vote in Washington.  Hart served in the U.S. Senate from 1959 until his death in 1976 and played a crucial role in the passage of civil rights legislation during the Great Society and in the creation of the Pictured Rocks and Sleeping Bear Dunes national lakeshores in Michigan, among many other environmental accomplishments.  Interviewed during the Huron River Walk, Hart praised the ENACT Teach-In for its focus on public outreach, in the tradition of the 1965 U-M teach-in on the Vietnam War that "turned a lot of people around."  He expressed confidence that grassroots pressure from around the nation could force the federal government to address the environmental crisis, although "if not, we are doomed."  Senator Hart also demonstrated the common ground between mainstream environmental liberalism and the corporate reforms championed by Ted Doan of Dow Chemical, with an acknowledgment that more radical critics would find his solutions too optimistic: "Given the technology we have--and I know this offends some--given the technology we have which itself contributes to pollution, nonetheless properly applied I would hope could eliminate it.”

"Citizen Action" and "War and the Environment" 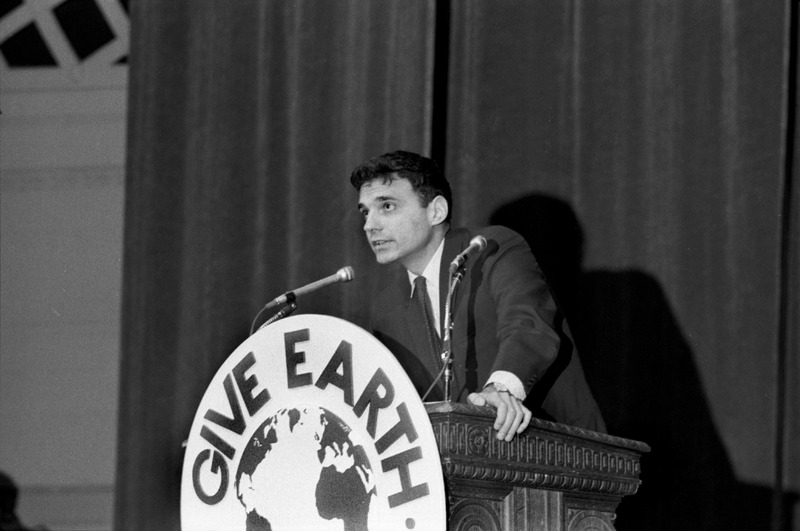 Consumer advocate Ralph Nader spoke at the featured afternoon event on "Citizen Action" and lambasted industrial pollution as a form of "corporate violence."  Nader took a more radical stance than Philip Hart and questioned whether science and technology could solve the environmental crisis without significant constraints on corporate and government autonomy.  He defended student radicals and argued that big business and its apologists and allies in government were responsible for the "laceration and destruction of society's values" and the contamination of the air and water.  With a touch of humor, Nader told the crowd at Hill Auditorium that he did not understand "why an individual should be prevented from relieving himself in the Hudson River when Con Edison can dump tons of pollutants there daily."  He ended with a call for American youth to take direct action to defend the environment against corporate "tyranny."

During the ENACT Teach-In, Nader's Project on Corporate Responsibility also launched "Campaign GM," an activist investor plan to transform General Motors by bringing shareholder pressure on behalf of "all citizens who experience the forced consumption of its air pollution" and other environmental degradations, including opposition to urban mass transit.  Nader condemned modern corporations in general, not only GM, for exploitation of resources that should be public goods and therefore "growing violence to our air, water, and soil environments."  The Michigan Daily endorsed Campaign GM and demanded that the University of Michigan either divest its stock holdings in the Detroit-based automobile companies or use its leverage to challenge GM policies that "are destructive to both mankind and the environment."

University of Michigan professors Anatol Rapoport and Irwin Goldstein, Professor Kenneth Boulding of the University of Colorado and Douglas Fulton of the Ann Arbor News spoke on the effects of war on the environment at the War and the Environment discussion. With David Gordon, a co-chairman of New Mobe acting as the moderator, the professors, and outdoor editor discussed the environments of Vietnam and the United States. Each speaker blamed something different for the destruction of the environment due to war and several solutions were purposed. Fulton blamed high costs for the destruction of the environment during times of war, stating, "we can no longer afford the luxury of war, for we don't have enough resources." However, the professors thought it was more than just money that caused the destruction. Professor Rapoport argued that war itself was immoral and could not be used as an instrument of foreign policy, and Professor Boulding stressed for government reform and encouraged a smalled war industry as a solution. Despite the disagreements in policy, there was a mutual agreement that pollution is evil and solutions need to be created to fix it. However, because war was the source of pollution and environmental destruction in both the US and Vietnam, no simple fix could be made in one sitting to solve the issue at hand.

"Man's Future: Struggle for Survival," the final event of the ENACT Teach-In began with remarks from Richard Hatcher, the African American mayor of the industrial city of Gary, Indiana. Mayor Hatcher focused his speech on the environmental movement in relation to minority groups and urban pollution. He argued, "the environmental movement had taken the nation's attention away from the poor and victims of discrimination." However, he believed saving the environment could unite society, but the nation's priorities would need to change in order to solve the problem of pollution.

Mayor Hatcher's presence and discussion resonated with the arguments BAM and other black organizations on campus had against ENACT. These organizations also felt that ENACT had ignored them and stole attention from their issues. Mayor Hatcher agreed with their stances, which he expressed in his speech when he "warned conservationists not to ignore minority groups and the urban pollution they face." Mayor Hatcher also sympathized with black students lack of involvement in the environmental movement, "since they have different priorities...like getting enough to eat and getting racism off their backs."  Mayor Hatcher's speech and presence at the Teach-In showed ENACT understood the need for unity and inclusivity in the environmental community. It also revealed that ENACT listened to the demands of BAM and incorporated racial justice and urban issues into their Teach-In.

Following Hatcher's speech, a panel made up of Consolidated Edison board chairman Charles Luce, ecologists Lawrence Slobodkinn and Richard Levins, Friends of Earth President David Brower, economist Kenneth Boulding, and Representative John Dingell Jr., addressed Consolidated Edison as the largest polluters in New York.  Luce denied the allegations and claimed Con Ed was using more energy efficient and protective measures in its plants. Luce also stated that the automobile industry was the largest polluter in New York. Despite his claims, the crowd booed him throughout the panel.

David Brower of Friends of the Earth Warns that

David Brower, the nation's leading advocate of wilderness preservation, offered a dire warning during the "Man's Future: Struggle for Survival" panel.  As director of the Sierra Club, Brower played a key role in the passage of the Wilderness Act of 1964 and in mobilizing environmental activists to stop federal plans to construct hydroelectric dams in the Grand Canyon and other national parks.  In 1969, he left the Sierra Club to found Friends of the Earth, which fought to protect public land against exploitation by corporations and government agencies.  He would soon start a political action committee called the League of Conservation Voters.  At the event in U-M's Hill Auditorium, Brower proposed that only a lengthy struggle of political activism and lawsuits against government and corporations could save the environment. He also encouraged "everyone . . . be the Ralph Nader of your block."  In an interview at the Huron River Walk earlier that day, Brower explained that "if mankind's going to make it," then individuals would also have to transform their own consumer habits and even embrace the population control philosophy rather than continuing to "contribute to overburdening the planet."  Brower expressed optimism that the teach-in would bring such radical changes but warned that the “alternative to inconvenience and discomfort . . . is just obliteration.”