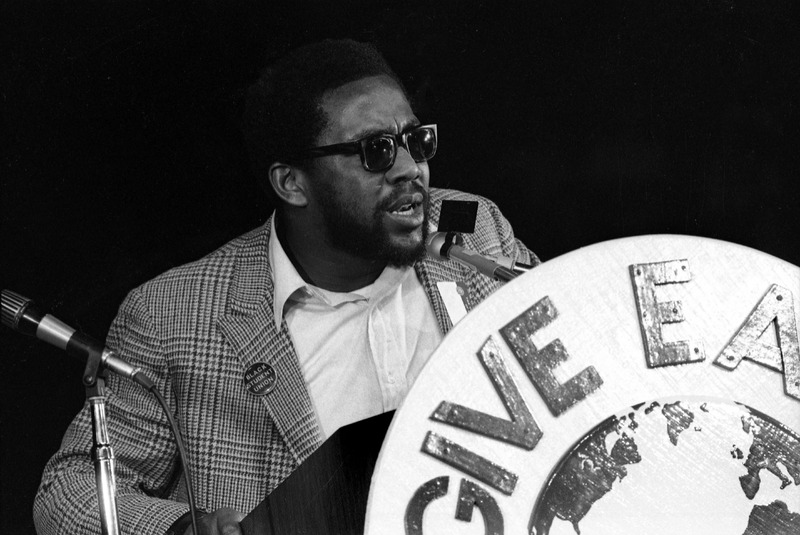 ENACT educated thousands through the Teach-In and people from all over the country and world celebrated their success and the environment movement. Despite the success of the Teach-In and the general acceptance from the surrounding community, ENACT faced groups that disagreed with the Teach-In’s methods and the group itself. Most notably of these groups were the Black Student Union, a black student activist group, Re-Enact, a group that believed ENACT was not liberal enough in their efforts, as well as some feminist groups.

The late 1960s and early 1970s were a restless time in America, especially on college campuses. Black students on campus and around the country were fighting for equal rights and representation, using protests, dialogues, and other means to advocate for equality and representation. With the emergence of ENACT and the planning of their Teach-In taking up media attention and the University's attention and support, black students felt their efforts were being silenced and the attention was stolen from black students and directed towards the environment.

Disagreements between ENACT and Black Students 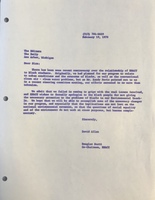 However, ENACT did not stay blind to the issues for long. In a letter  to the Daily Editor on February 19, 1970, Enact Co-Chair David Allan addressed the controversy between black students and ENACT, stating:

“Originally, we had planned for our program to relate to urban conditions and the concerns of Blacks...but as Mr. Randy Davis pointed out to us in a recent steering committee meeting, our efforts amounted to no more than tokenism. We admit that we failed in coming to grips with the real issues involved and ENACT wishes to formally apologize to the Black people for not giving the necessary attention to the problem of Blacks in our Environmental Teach-In. We hope that we will be able to accomplish some of the necessary changes in our program, and especially that the implication are not lost on national environmental movement, so that the questions of social equality and of the environment do not work at cross purposes, but become complementary.” 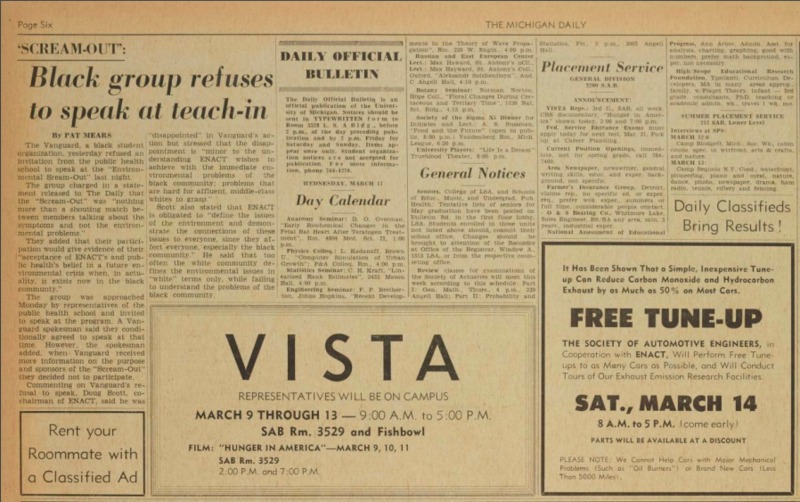 The Vanguard denies request to speak at "Scream-Out"

Despite ENACT’s recognition of their ignorance and their efforts to grow alongside the black community, not all members of black community were happy with ENACT’s actions.The Vanguard, a black student organization on U-M’s campus was one of the many black student groups and individuals who continued to disagree with ENACT. In a Daily article from March 11, 1970, the Vanguard “refused an invitation from the public health school to speak out at the “Environmental Scream-Out.” Their reasoning, “the “Scream-Out” was “nothing more than a shouting match between members talking about the symptoms and not the environmental problems,” and “their participation would give evidence of their “acceptance of ENACT’s and public health’s belief in a future environmental crisis, when in actuality, it exists now in the black community.” The Vanguard’s choice to not participate in the Scream-Out did not go unnoticed. Doug Scott was disappointed in the Vanguard, because “Enact is obligation to “define the issues of the environment and demonstrate the connections of these issues to everyone, since they affect everyone, especially the black community… (and) too often the white community defines the environmental issues in “white” terms only, while failing to understand the problems of the black community.” The bridge between ENACT and black students was not fully built and needed support, however ENACT’s effort to build connections came as an afterthought and too late.

Not only were some black community members against the Teach-In because it failed to showcase black communities issues with the environment but because it also took away attention from black issues. This can be seen at the local Ann Arbor High School, Huron High School. During the Teach-In, “most of Huron High School’s black students boycotted an ENACT conservation assembly... at the high school” and “about 90 of Huron’s 100 black students to a study hall instead of the auditorium.”  The peaceful protest that caused 90 percent of the black student body at Huron High School to sit out of the ENACT presentation was due to “the lack of faculty and administrative attention to Negro History Week last month, in comparison with what they feel was given to ENACT.” Their peaceful protest shows that problems with ENACT stemmed from taking away attention from black issues. The actions of high schools students shed light on the actions of college students in the Black Action Movement and show effects of the Teach-In and the anger towards the Teach-In did not stop on college-level.

Despite the protest and anger from black community members, ENACT stayed focus on the Teach-In. In an interview, steering committee member Elizabeth Grant Kingwill discussed how she believed the differences between the two groups strengthened the Teach-In as a whole. Due to the efforts of black student groups, ENACT become more aware of the black community and the environmental issues that most affected them. To Elizabeth Grant (at the time), both groups were able to grow together and become stronger by addressing their issues and working together.

George Coling on "Blacks for the Environment"

George Coling, a Public Health student involved with ENACT, worked personally with black students in ENACT. During 1970, he convinced his next-door neighbor to organize a group of black students for the environment and later on returned the favor for his neighbors when he helped her with an organization she was involved with. Coling describes both conflict and growth between ENACT and black students but ultimately believes ENACT became a stronger and more aware organization because of students efforts to get involved and inform ENACT of their mistakes.

Dave Allan viewed the disagreements between ENACT and black students similarly to Grant and Coling; however to him, there was not much conflict at all. He believed ENACT was "below the radar" when it came to public awareness of the organization, and from his perspective, the Black Action Movement was more well known and received more attention than ENACT did. However, he continued to say ENACT "issued some statements in support" for BAM and other black student organizations, because it was something ENACT as an organization believed in. Through his interview, it is clear Allan saw the Teach-In and ENACT as mechanisms to spread information on the environment, and not a political group.

ENACT received criticism from left-wing radicals on campus who believed ENACT was not going far enough in their efforts and was unethical for taking money from polluting corporations. ENACT had previously endorsed a Students for a Democratic Society protest against Dow Chemical's manufacture of napalm and recruitment on campus, but the decision of Teach-In organizers to accept donations from Dow and Ford Motor Company helped create an open schism.  The most prominent radical group against ENACT was RE-ENACT/SDS, a self-proclaimed "radical eco-freaks for environmental action" group. RE-ENACT/SDS believed many of the speakers attending the Teach-In were millionaires who benefitted from speaking monetarily or were simply participating for political gain. In order to express their frustration, the radicals in RE-ENACT/SDS made a pamphlet mimicking ENACT's Teach-In program for the Kick-Off Rally. Throughout the pamphlet, they criticized the speakers at the Kick-Off Rally and other political issues at the time.

In their pamphlet, REENACT/SDS labeled the Kick-Off Rally a "Rip-Off-Kick-Ass Rally" and criticized the 50¢ charge to attend, asking why it was not free. No one was safe from criticism in the RE-ENACT pamphlet. The radical group accused University President Robben Fleming  of speaking in order to boost his declining liberal image and attacked the University  for its "complicity in the rape of our environment by corporations through U. investments in them. It has also meant the protection of there corps. rights, such as Dow's, makers of herbicides and napalm, and General Electric's, who has made the production of non-polluting electric cars impossible by holding the patent for them." RE-ENACT criticized a broad range of Teach-In speakers including Governor William Milliken, Arthur Godfrey, James Shapiro, Barry Commoner, Senator Gaylord Nelson, and singer Gordon Lightfoot. The specific critiques included being paid to speak, participating for political gain, disagreeing with radical environmentalists such as population control advocate Paul Ehrlich, and not being progressive when it came to women and black rights.

RE-ENACT/SDS wanted justice for the environment and environmental action like ENACT, but RE-ENACT had more extreme demands. In the pamphlet, they stated:

"Ecological Demands for the University

Although some students on campus disagreed with ENACT, the Teach-In still was extremely successful and brought in thousands of people from across campus, all over the state, and even from around the country. Acting as an organization that needed thousands of dollars to operate and speakers of all times to simply host the events, ENACT needed to take a more moderate approach to the Teach-In to expand its audience base and funding base. Although this angered left-wing radicals, the Teach-In was able to teach thousands of people on the environmental issues plaguing society and encouraged previously environmentally destructive corporations to become greener.