Environmentalism and the National Agenda 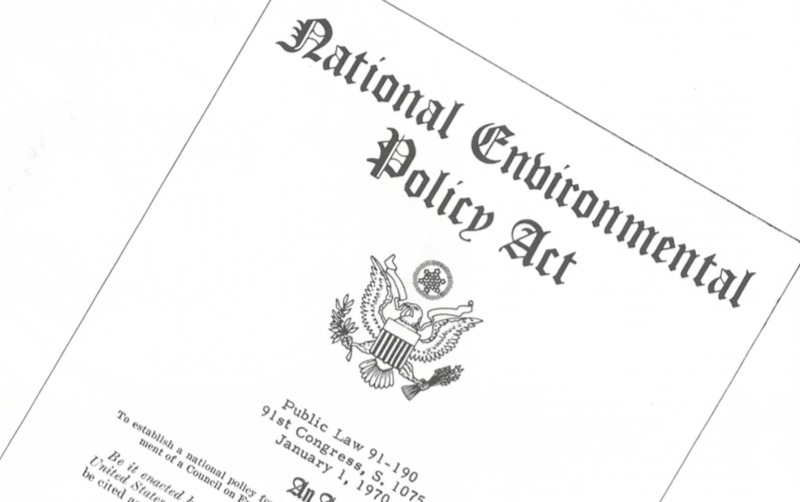 The "environmental crisis" of the late 1960s, including the massive coverage of the Santa Barabara oil spill and Cuyahoga River fire, galvanized public opinion and helped create the opening for major environmental legislation in Congress. Presidents John F. Kennedy and Lyndon B. Johnson both spoke of improving environmental quality as a way of improving the quality of life for Americans, but environmental activists and ecological scientists worked to bring these lofty ideals down to the ground and to push these ideas forward in the 1960s. Several liberal Democrats in Congress, such as Senator Edmund Muskie (D-ME) and Representative John Dingell (D-MI), sponsored and advocated for groundbreaking environmental legislation, such as the National Environmental Policy Act of 1969. President Nixon "had little personal interest in or enthusiasm for the subject," according to the chairman of his own Task Force on Environmental Policy, but he understood "the political significance of the environmental issue." Environmental issues demanded attention and ultimately emerged as a central issue on the national policy agenda, setting the stage for the "environmental decade" of the 1970s. 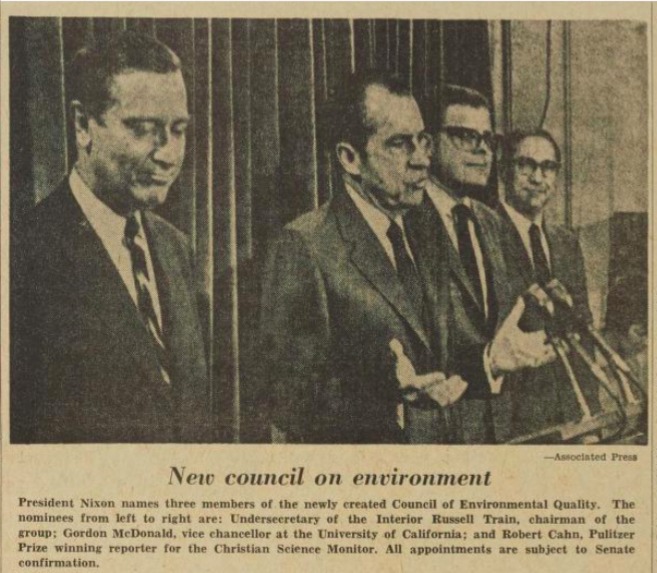 Senator Muskie was the main sponsor of NEPA, a bill that recognized the need to implement a national policy “to create and maintain conditions under which man and nature can exist in productive harmony” and to create a more cohesive approach to environmental issues. In order to do so, the bill had two central mandates. Firstly, the bill created a three-man committee of environmental experts of various backgrounds and expertise, the Council on Environmental Quality (CEQ), to “provide a top level, independent body, unencumbered by the demands and politics of operating programs and individual interests, free to draw independent conclusions, and to formulate a broad policy which would be of nationwide benefit.” The bill also mandated that each federal agency proposing legislation or other actions which could "significantly" impact the environment must draft an environmental impact statement. This statement must provide data and analysis about the potential effects of their proposition, be approved by the CEQ, and be made publicly available. The environmental impact statement provision, therefore, provided leverage for activist groups to challenge government agencies and demand full adherence to NEPA.

Over a hundred witnesses, ranging from scientists to concerned citizens, testified in hearings in front of the Senate and the House between April and June of 1969, proclaiming the importance of government intervention to regulate agencies who repeatedly overlooked the environmental impacts of their corporate decisions. One such hearing took place in Ann Arbor, Michigan on June 13, 1969. Many concerned environmentalists from across Michigan testified, including U-M professors and faculty, representatives from various organizations, such as the United Auto Workers, Sierra Club, the League of Women Voters of Michigan, the West Michigan Environmental Action Council, and many others. Joan Wolfe, the head of the WMEAC, testified, "Up to now there has been no national commitment to a quality environment...we are not adequately protecting our environment and...perhaps even human survival depends" on passage of this legislation. Most witnesses expressed similar concerns but also applauded the federal government's recognition of their environmental concerns. Unlike subsequent environmental legislation, the bill generated little public controversy even as it established a landmark framework for environmental policy. 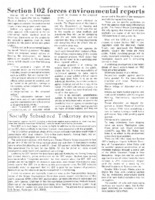 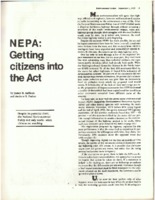 On January 1, 1970, despite his hesitancy, President Richard Nixon signed the National Environmental Policy Act of 1969 (NEPA), claiming that it was “particularly fitting that [his] first official act in this new decade” was to sign this law. NEPA did establish a new set of provisions for agencies, including stricter reporting practices; however, the vague language of the bill failed to provide a fortified infrastructure for enforcement. The environmental impact statement provision of NEPA allowed citizens to participate and to comment on the proposed actions of agencies who had historically disregarded environmental issues. Environmental Action's report on the bill claimed, "This is an awkward, unsatisfactory system. It relies too heavily on interest groups or individuals who are alert to the possibility than an agency is considering a particular action." After NEPA’s passage, many environmentalists and Congressmen, including Michigan's Senator Philip Hart and Representative John Dingell, became frustrated, as they watched the provisions of NEPA fail to counter the problems at hand. In particular, environmental leaders in Congress demanded far more money than the Nixon administration would support. In a letter to President Nixon, Senator Hart expressed his concern that "administrative agencies often cannot be relied upon to enforce the laws." Although NEPA legitimized the government's recognition of the environment as a serious issue, the bill did not go far enough to incite major changes in the environmental consciousnesses of federal agencies or to offer substantive plans for enforcement.  Ultimately, as this Environmental Action newsletter claimed, "the effectiveness of the NEPA process depends on the extent to which citizens get into the Act."

Nixon's State of the Union Address, 1970

The public alarm for action to address the "environmental crisis" of the 1960s forced President Nixon to address the pressing environmental issues that concerned citizen activists across the country. In President Nixon's first State of the Union Address on January 22, 1970, he proclaimed the 1970's as a decade dedicated to the amelioration of "the quality of life in America." One area in which this vision proved most clear was his program for the environment, "the most comprehensive and costly" one in the nation's history.

Nixon's State of the Union Address on environmental quality, January 22, 1970

"The great question of the seventies is, shall we surrender to our surroundings, or shall we make our peace with nature and begin to make reparations for the damage we have done to our air, to our land, and to our water? Restoring nature to its natural state is a cause beyond party and beyond factions. It has become a common cause of all the people of this country. It is a cause of particular concern to young Americans, because they more than we will reap the grim consequences of our failure to act on programs which are needed now if we are to prevent disaster later." - Richard Nixon 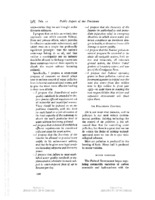 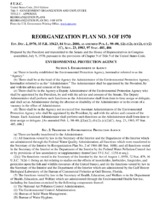 After devoting much of his State of the Union address to the environmental issue, Nixon, in a special message to Congress, delineated over a dozen orders and twenty-three requests to further solidify plans for the problems he had previously noted. Nixon, for the most part, evaded the issue of enforcement, which critics frequently noted. Typically, as various environmental issues arose, the federal government created different agencies to address them which fragmented enforcement. In 1970, to address that problem, Nixon issued an executive order establishing the Environmental Protection Agency (EPA), which created a framework for centralized attention to environmental policy and thus responded to challenges from Congressmen and environmentalists who questioned his intentions. The EPA sought to amerliorate the discrepancy between the "interrelatedness" of the environment and the numerous regulatory agencies designated for related issues. Environmentalists and Congressmen often questioned the authenticity of Nixon's eloquent environmental statements, but he did acknowledge the legitimacy of environmental quality as a political issue and articulate the necessity of a collective aspiration towards a long-range plan.

"Our national government today is not structured to make a coordinated attack on the pollutants which debase the air we breathe, the water we drink, and the land that grows our food. . .Despite its complexity, for pollution control purposes the environment must be perceived as a single, interrelated system. . .A single source may pollute the air with smoke and chemicals, the land with solid wastes, and a river or lake with chemical and other wastes." - Message of President Nixon 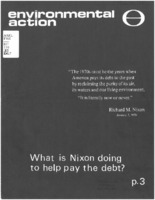 "Environmental Quality," Hearing before the Subcommittee on Fisheries and Wildlife Conservation, Committee on Merchant Marine and Fisheries, House of Representatives, June 13, 1969 (Washington: GPO, 1969)

Robinson Meyer, "How the U.S. Protects the Environment, From Nixon to Trump," The Atlantic, March 29, 2017