ENACT Advertisement for Day 3 (March 13) of the Teach-In 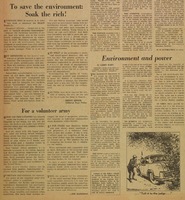 "Soak the Rich" and "Environment"

and Power" Editorials in Daily

The ENACT Teach-In brought prominent politicians, corporate officials, and ecological activists to Ann Arbor to debate the "Root Causes of the Environmental Crisis," the title of the main event on the evening of Day 3.  The teach-in model, based on U-M's influential Vietnam War event in 1965, emphasized intellectual debate in order to increase public awareness and encourage activism both on campus and in the community beyond, empowering local people to increase pressure on public policymakers.  Many of the speakers blamed the ecological crisis on the actions of corporations and government, argued that solutions required radical changes to the existing power structure, and raised hard questions about capitalism itself.  On March 14, in an editorial called "Soak the Rich," the Michigan Daily captured this ethos by mocking the suddenly "socially conscious businessmen" who were promising to fight pollution when their "main concerns are profit, accumulation, and power."  The Daily demanded that government officials raise taxes on corporations, not ordinary Americans, to pay for pollution clean-up given the "destruction of the environment engineered by private industry."  An accompanying editorial by ENACT member Larry Kahn proposed the socialist solution of "democratic control of industry by the people" because the root cause of the environmental crisis was the exploitation of natural resources, a public good, by private corporations interested only in their own profits.

"Root Causes of the Environmental Crisis"

Daily on "Roots Causes of

ENACT held the "Root Causes of the Environmental Crisis" program at the auditorium of Pioneer High School in Ann Arbor, part of the teach-in's agenda to promote campus-community outreach and reach an audience of the general public as well as elementary and high school students.  A raucous crowd of around 2,500 people attended the event, with U-M students bused in and an overflow audience watching on closed-circuit TV in the Pioneer gymnasium.  The participation of Herbert (Ted) Doan, the president of Michigan-based DOW Chemical, guaranteed controversy while fulfilling ENACT's mission of generating a robust public debate (Dow also contributed to ENACT's budget).  Outside the event, radicals organized guerilla theater protests, just the latest in a sustained national campaign by antiwar activists who condemned Dow Chemical as "environmental criminals" for its manufacture of the napalm herbicide used by the U.S. military in Vietnam.

as the Solution to Environmental Problems

Ted Doan emphasized the positive contributions of Dow Chemical in developing technology that had improved the standard of living for the American people and was essential to cleaning up the environment.  The Dow president praised the teach-in for raising public awareness, even as members of the crowd heckled him about napalm and other concerns.  In this interview videotaped before the event, Doan promoted the anti-pollution improvements in Dow's own plants and explained that environmental technology could be both beneficial and profitable, such as the advanced septic and water treatment systems (developed in partnership with U-M researchers) that the company sold to municipal governments.  Doan defined the environmental crisis as a "psychological problem"--not an issue of exessive corporate power or inadequate government regulation--and expressed certainty that the solutions could be found within the existing framework of American society.

Walter Reuther Speaks at the ENACT

Teach-In on the "Environmental Crisis"

Walter Reuther, the president of the United Auto Workers, portrayed existing "marketplace values" as the problem rather than the solution at the "Root Causes of the Environmental Crisis" event.  During the 1960s, Reuther became increasingly outspoken on environmental issues, demanding stronger government regulations to address the problems that "are destroying not only our natural resources but which are corrupting and corroding the very environmental atmosphere we breathe and live in each of our daily lives."  To support Earth Day in 1970, the UAW also called for enactment of an Environmental Bill of Rights: "the Right to Fresh Air, Clean Water, and the Enjoyment of a Healthy, Attractive Living Environment.”

on "Marketplace Values" and the Environmental Crisis

At Pioneer High School, Reuther argued that science and technology could not solve the crisis without a fundamental reorientation of human society and moral values.  The union leader also pledged to demand environmental reforms from the automobile companies in upcoming contract negotations, which did not stop members of the crowd from heckling him as partially responsible for air pollution.  At one point, Ted Doan even sidestepped criticism of Dow Chemical's manufacture of napalm by asking Reuther if his union would stop making the cars that polluted the atmosphere.  In this videotaped interview, Walter Reuther praised ENACT members for their effort to “awaken America, sound the alarms, so that millions and millions of American citizens will follow the leadership of the students."  Reuther conclude that "it will take a massive effort with a commitment of massive resources if we’re going to reverse the dangerous deterioration in our environment and if we’re going to save this good earth.”   (Tragically, Reuther died in a plane crash less than two months after speaking at the ENACT Teach-In).

The most radical speaker, Murray Bookchin, gave a presentation on "Ecology and Revolutionary Thought" at the event, after addressing the Eco-Rally on the Diag earlier in the day.  Bookchin was an anti-capitalist activist and writer whose philosophy combined anarchism, socialism, and libertarianism with the "participatory democracy" ethos of Students for a Democratic Society."  He labeled science "an instrument of control over the thought processes and well being of man"--with the potential exception of ecology, a discipline that at its best sought to create "a human community that lives in a lasting balance with its natural environment."  Ecology acknowledged the "sovereignty of nature over man and all his activities" and recognized the global scope of the environmental crisis, another form of imperialism caused by the pretensions of the United States and other great powers to "mastery over the planet."  Bookchin blamed the ecological crisis on the social values of modern capitalism, an urban-industrial society that promoted growth at almost any cost and had made chemical contamination and destruction of the air and water a feature of everyday life.  He called for some specific policy solutions, such as the replacement of coal and nuclear power with renewable energy drawn primarily from solar, wind, and water resources.  Bookchin's main recommendation, however, involved not government programs but decentralized, self-sufficient anarchist communities that would live in anti-capitalist harmony with nature.

Senator Edmund Muskie, a Democrat from Maine, staked out the liberal reform position in closing remarks at the "Root Causes of the Environmental Crisis" event.  Muskie was one of the most influential environmental advocates in the U.S. Congress and had been the vice-presidential nominee of the Democratic party in the 1968 election.  At Pioneer High, Muskie called for a "total strategy to protect the total environment" and criticized President Richard Nixon for failing to support the funding and programs necessary to address the fundamental crisis.

Muskie acknowledged that many radicalized college students had lost faith in the political establishment of both parties yet urged them to educate the American public and work for reforms within the system with "a little patience."  He connected the environmental crisis directly to the campus protests against the Vietnam War and the urban unrest over racial inequality, as too many Americans felt they had lost control over the government policies that affected their lives.  In this interview, Senator Muskie urged college students who were concerned about the planet's survival to turn the teach-in into a "teach-out" by mobilizing off campus to promote "widespread citizen participation in policmaking."  Muskie expressed confidence that the existing system of government could address the environmental crisis, but only if public awareness brought significant grassroots pressure on Washington.