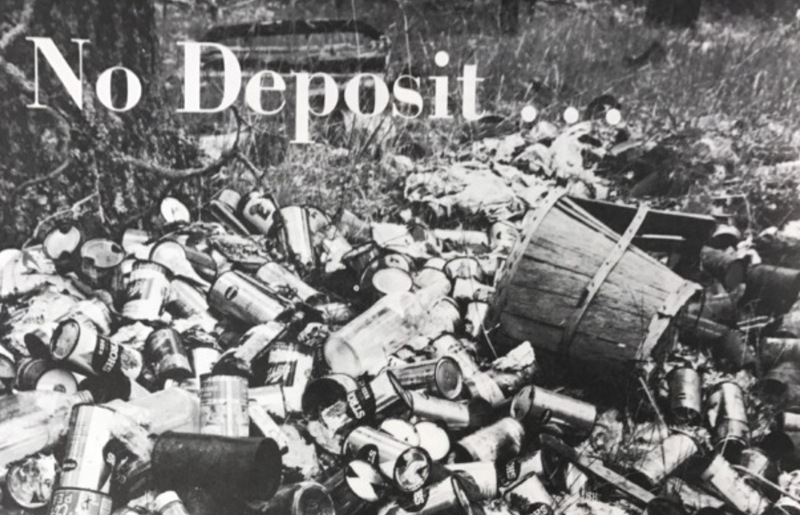 Photograph depicting the consequences of not recycling, 1970.

On November 2, 1976, voters in Michigan passed the Michigan Beverage Container Act (nicknamed "The Bottle Bill") in a statewide referendum. The Bottle Bill put a 10-cent deposit on all empty bottles of beer, carbonated soft drinks, and water. Most states do not have bottle bills, and Michigan's 10-cent deposit remains the highest in the country. The Ecology Center worked with other environmental advocates of the Bottle Bill in a statewide coalition and helped publicize its benefits to the city of Ann Arbor.

Though innovative, the Bottle Bill represented a political compromise compared to more radical proposals to ban plastic and aluminum containers altogether.  In this interview right after the 1970 Teach-In at the University of Michigan, ENACT co-leader Art Hanson discussed the difficulties surrounding recycling. He explained that rather than implementing a 5 or 10-cent tax on returnable cans, it would be better to go "to the root of the problem and just stopping them [cans] altogether." While many people applauded the efforts and the sentiments behind the Bottle Bill, others, like Hanson, thought that the Bill did not go far enough. Despite some pushback, the Bill was a profound piece of legislation that significantly reduced the State of Michigan's carbon footprint.

Millions of bottles and cans of soda and beer were consumed each year in Ann Arbor alone. In the late 1960s, it was estimated that about $841,000 worth of reusable bottles were scattered in heaps of trash throughout the Detroit area. That equals an astounding $6 million in 2017 dollars, Bottlers, however, had begun to package their drinks in non-returnable bottles. This article by a graduate student in the U-M Journalism Department explained how there is not one single person responsible for this change. This is, in fact, an example of the "tragedy of the commons "where individuals at every level—the bottlers, the distributors, and the consumers—practice unsustainable waste disposal, which results in large negative effects on the environment." According to the article, "Americans throw out 30 million bottles and jars and 50 billion cans per year; the numbers keep growing." There were many solutions to fixing this problem, but environmentalists argued that moving towards a deposit system would be the cheapest and the most politically feasible.

Most people did not pay attention to their rates of consumption until the 1970s. This newspaper advertisement sought to make Michiganders more aware. The advertisement was published with other sources advocating for a Bottle Return system—specifically, the Bottle Bill. The Mackinac Bridge is about 5 miles long and connects southern Michigan to the Upper Peninsula. After viewing this advertisement, Michiganders were better able to understand the ramifications of their consumption habits because it referenced millions of pounds of waste with this historic and well-known Bridge. Consuming millions of bottles of beverages alone is not terrible; however, the vast majority of bottles were not recycled and were not disposed of properly. As such, many activists advocated for this Bottle Bill that would promote more responsible consumption and waste habits. 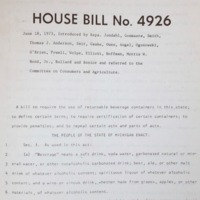 House version of the Bottle Bill 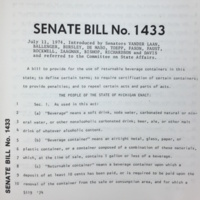 Senate version of the Bottle Bill

These are the Michigan House of Representatives' and the Michigan Senate's versions of the Bottle Bill, officially referred to as the Michigan Beverage Container Act.  In order to become law, both houses of the legislature must pass identical bills. As such, these are drafts of the final Bill. Some of the differences include how to define reusable containers and alcoholic beverages. Ultimately, the legislature enacted the Bottle Bill in 1976 and implemented it in 1978. The legislature also amended the Bottle Bill twice, once in 1989 and again in 2008. These amendments permitted a greater variety of bottles to be recycled, as well as adjusted the payments given to individuals for recycling.

The Bottle Bill brought Michigan many undeniably positive effects. Some of these benefits include promoting recycling in communities, creating jobs, and encouraging production responsibilities amongst bottling firms. Opponents of the Bill argued that it would lead to many job layoffs, especially within the bottling industry, but this turned out to be wrong. As one of the first state-sponsored bottle recycling programs, the Bottle Bill paved the way for other states to enact similar laws that incentivized recycling. Programs such as these have allowed for over 120 billion bottles to be recycled. 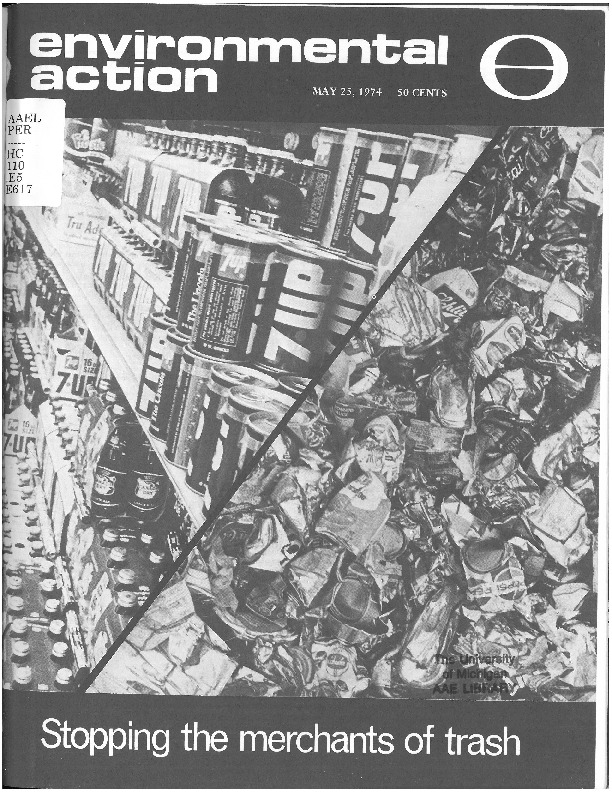 Environmental Action on the growing

Supporters of the Bottle Bill were met with great surprise in 1974 when President Richard Nixon came out in support of the Nonreturnable Beverage Container Prohibition Act. Since the first Bottle Bill was enacted in Oregon, similar bills began to spread across the country, including the United States Congress. This Bill provided a deposit for returnable bottle containers and banned all pull-tab openers, which would eliminate the use of aluminum cans. Clearly, reusing bottles is more environmentally efficient. Eileen Clausen, who worked in the EPA's Office of Solid Waste Management, explained, "The use of returnable/refillable containers saves energy, generates less solid waste and uses fewer resources than does producing a new can or bottle." Ultimately, the Bill never advanced into law.

This Environmental Action article also outlined the economic benefits of enacting a Bottle Bill. The largest expense in the production of beer and soda is the packaging itself, accounting for over half of the total cost of production. As such, one would think that beverage and bottling companies would be interested in reducing costs by reusing bottles instead of producing new ones; however, Coca-Cola and other bottlers expressed resistance to Bottle Bills. Perhaps it was because non-returnable packaging contributed to the monopolization of bottling companies by large firms. The article, in essence, suggested that supporting a Bottle Bill was akin to promoting competition amongst firms and resisting monopolization. 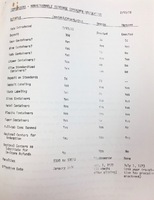 The Michigan Bottle Bill was profound in that it offered the largest deposit of 10 cents per bottle. According to this table, the Michigan Bottle Bill was the third Bill of its kind passed in the United States. The Bill was unique in several other ways: it processed wine and liquor bottles, it had a state label placed on every bottle, and implemented penalties for violating the Bill. A document such as this could have been used as a reference for state representatives to better understand the effects of passing the Bottle Bill. Today, the state of Michigan still has the largest bottle deposit in the country even though several more states joined in passing similar legislation.