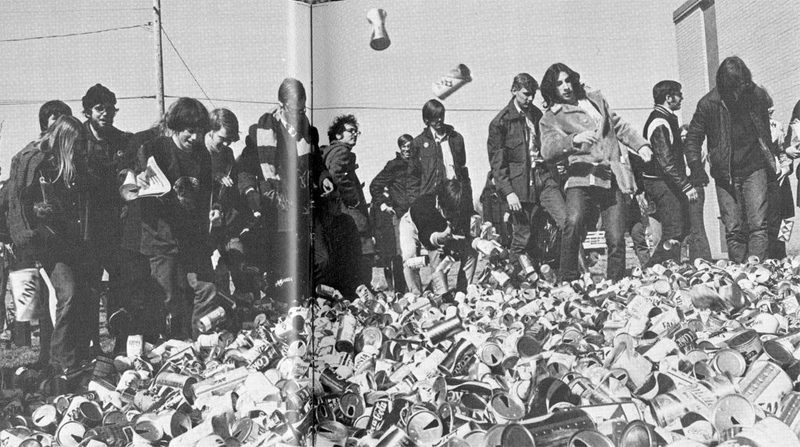 Establishing Ecology Centers Across the Country, 1970.

The impetus for planning the ENACT Teach-In at the University of Michigan was to bring awareness to communities about saving the environment. David Allan and Art Hanson, two key architects of the Teach-In, described what happens next in this interview right after the March 1970 event at the University of Michigan ended. For these ENACT leaders, the main goal was establishing ecology centers in every major city across the country. Art Hanson explained that the Berkeley had already established one that could serve as a model for future ecology centers by providing information to communities about environmental issues and how to live more sustainably. Hanson and Allan believed that it was imperative to maintain the momentum and enthusiasm of environmental activism after the Teach-In and that the key legacy would be a permanent ecology center to promote activism in Ann Arbor. 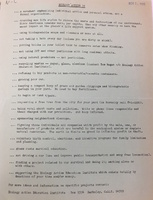 Environmental activists in Berkeley, California, founded the nation's first local ecology center in 1969.  The growing storm of political activism can be seen in the Berkley Ecology Action Education Institute's informational letter sent out in November 1969 to guide and motivate activists and provide information to average citizens. To encourage community activism and protect the environment, the Berkeley Ecology Action Education Institute recommended that residents recycle, compost, take mass transit, and engage in other low-impact activities.  The center posed such actions as easy to accomplish and as simple, cheap steps towards making neighborhoods clean.  The newsletter also highlighted popular environmental issues such as toxic chemicals and the population crisis, calling for "not using DDT and other pesticides with long residual effects" and for citizens to practice "voluntary birth control, abortions, and incentive programs for family limitation and planning."  This list perfectly captures the feelings of the 1960s in one word: activism. Pushing citizens of all ages, genders and economic statuses to not take a bath every day, to request free trees from the city and to grow food individually are all examples of what members of the community can do on an individual basis to take action in their environments.  The Berkeley center also strongly criticized corporate polluters and capitalist values, urging residents to fight "individuals and companies which profit by the sale, use, or manufacture of products which are harmful to the ecological system or deplete natural resources.  The earth is finite—greed is infinite; profit is theft." 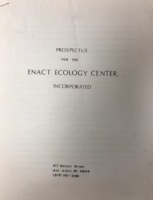 In Ann Arbor, the founders of the Ecology Center came from the ENACT Teach-In steering committee.  In its prospectus, ENACT and the newly-formed Ecology Center sought to promote activism and education to the local Ann Arbor community. In its introduction, the authors mentioned several consequences of negligent behavior such as overpopulation and increasing pollution. Stemming from the successes of the Teach-In, ENACT sought to sustain enthusiasm for environmental activism. ENACT explained that the Ecology Center was created to "provide a framework for citizen education on environmental issues" and to "supply accurate information and advice to all seeking it." Additionally, the Center attempted to "bridge the gap between campus, high schools, and community," so that it could become the focal point of environmental activism for the entire city. The rest of the document outlines several programs and opportunities the Ecology Center supported such as a data bank, libraries, and lectures. It also calls for volunteers to help implement the aforementioned programs. ENACT hoped that more communities across the country would establish ecology centers similar to the one in Ann Arbor so that they would become educated and would work towards establishing a sustainable future. 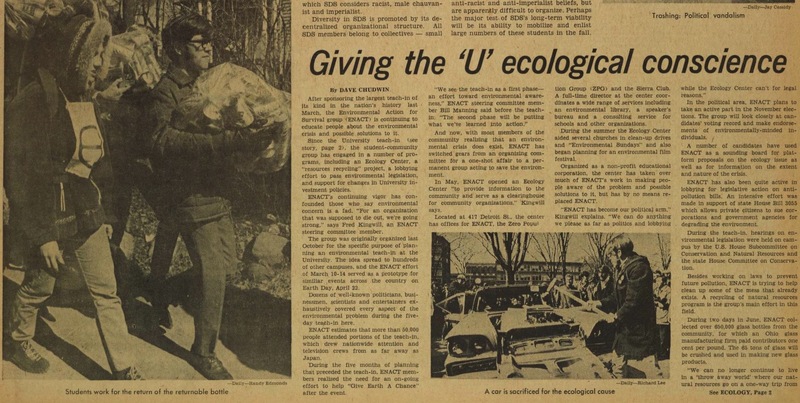 ENACT opened the Ecology Center of Ann Arbor in May 1970, less than two months after the Teach-In, to leave a lasting mark on the community.  In this Michigan Daily article, Fred Kingwill, a member of the ENACT steering committee, explained that the Ecology Center was created "to provide information to the community and serve as a clearinghouse for community organizations." Some of its work included building an environmental library, consulting schools on environmental education and awareness, and working with churches to clean up Ann Arbor. As a nonprofit, the Ecology Center was established to cater towards local organizations and the community. According to Kingwill, "ENACT has become our political arm," engaged in activities such as lobbying the state legislature for anti-pollution policies and for passage of the Michigan Environmental Protection Act.  While ENACT "can do anything we please as far as politics and lobbying," for legal reasons the Ecology Center had to support this political activism through educational efforts.

ENACT started the Ecology Center with funds left over after the Teach-In. This surplus amounted to about $70,000 in 1970 (almost $500,000 in 2017 dollars). Leaders of the Teach-In sought to spend this money on a lasting project that would promote environmental activism in Ann Arbor, rather than pocketing the money for themselves. ENACT also established the Ecology Center to be a central meeting place for local and statewide environmental groups such as the Sierra Club, so that they could hold their meetings. Elizabeth Grant (Kingwill), a School of Natural Resources graduate student and member of the ENACT steering committee, stayed in Ann Arbor over the summer with a few others to learn how to start a non-profit. In this video, she describes the experience and how it inspired her to remain involved with nonprofits for the rest of her life.

Mike Schechtman, director of the Ecology Center in the early

1970s, on Interacting with SNR and the Community

The Ecology Center worked closely with the School of Natural Resources (SNR) to form a connection to the University of Michigan. In the 1970s, SNR sought to diversify its faculty in recognition that there was no such thing as "value-free research." As explained by Mike Schechtman, a U-M graduate student in SNR who took a leave from classes to become the second director of the Ecology Center, they believed that scientific research should go hand in hand with environmental advocacy and community orientation. SNR therefore hired activist-oriented faculty such as Jim Crowfoot, Bunyan Bryant, and Peter Sandman. Neither Bryant nor Sandman had a focus in the sciences of natural resources; however, they succeeded in recruiting some of the top graduate students to work on applied research with a policy focus. Over time, SNR changed from focusing on "environmental advocacy" to "environmental justice." The Ecology Center served as a resource for SNR and many of the students went to the Ecology Center for academic advising purposes, as well as with their graduate school projects. The collaboration and overlap between these two entities connected all environmental activists in the Ann Arbor area.

in Ann Arbor and on the National Network

In a chain reaction, the leaders of ENACT and the Ecology Center of Ann Arbor drew inspiration from the existing center in Berkeley and then worked to establish ecology centers in other communities around the United States.  Cliff Humphrey, an environmental activist in California, came to Ann Arbor to help ENACT set up the Michigan version.  University of Michigan students including George Coling, an ENACT steering committee member and graduate student in public health, then played a central role in the effort to spread ecology centers nationwide.  In December 1970, the Ecology Center of Ann Arbor participated in a national conference that brought together leaders in the ecology center movement from across the country. The Ford Motor Company Foundation helped fund this event.  Coling, after the national conference, became the national coordinator of all of the local ecology centers. In this video, Coling describes how the concept of a national network of ecology centers also came from a conference funded by the Public Health Service (before the EPA), as well as from Richard Nixon's White House Conference on Youth.

Mike Schechtman on Relationships with

National Initiatives and Other Groups