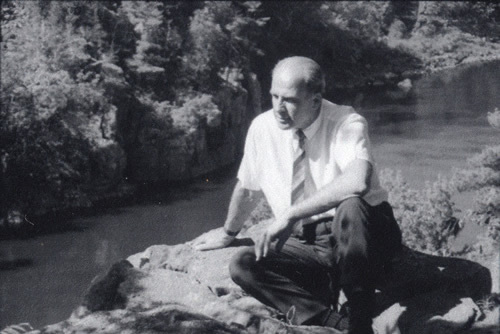 Gaylord Nelson sitting near the St. Croix River in Wisconsin 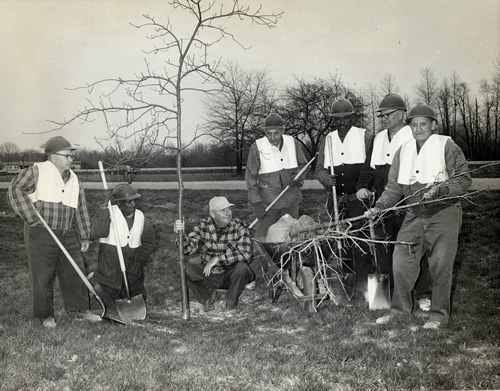 Gaylord Nelson, sometimes known as the father of Earth Day, was born in Clear Lake, Wisconsin in 1916. It was here he first realized the plight that the earth was suffering at the hands of local timber companies. He left Wisconsin for college and graduated with a degree in political science from San Jose State University in California. He then returned to his home state to receive his law degree from the University of Wisconsin, Madison. Like many young men of his generation, Nelson served in the United States Army during the Second World War, where he saw action in Okinawa. When he returned, he practiced law in Madison, Wisconsin and began his political career. He ran for Wisconsin State Senate in 1948, where he served for 10 years and in 1958, he ran for governor, defeating Republican incumbent Vernon W. Thomson. While serving as governor, Nelson earned a reputation for environmentalism. He overhauled the state’s natural resource management by creating the Department of Resource Development and he fought tirelessly for public parks and wilderness areas through the Outdoor Recreation Action Program. He carried his devotion to environmentalism with him as he won a seat in the United States Senate in 1962.

While in the Senate, Gaylord Nelson continued to push for environmental issues. He successfully lobbied President Kennedy to support the environmental cause, but he was sometimes met with apathy from his other colleagues. Environmentalism was not yet a popular political issue. He struggled to arouse the interest of the press, the public, and other lawmakers. In 1969, Nelson was inspired by the Anti-Vietnam War teach-ins and thought that maybe he could apply a similar strategy to mobilize support for environmentalism. He announced his plan for a national teach-in in September 1969 and the press began to notify the public. The event would consist of thousands of individual events organized across the country; coordinating these events soon overwhelmed Nelson’s Senate staff. He created Environmental Teach-In, Inc. to coordinate the national effort and to function as a resource for the grassroots community organizers. He stepped back from directly managing this group and instead traveled across the country delivering speeches and meeting with activists. 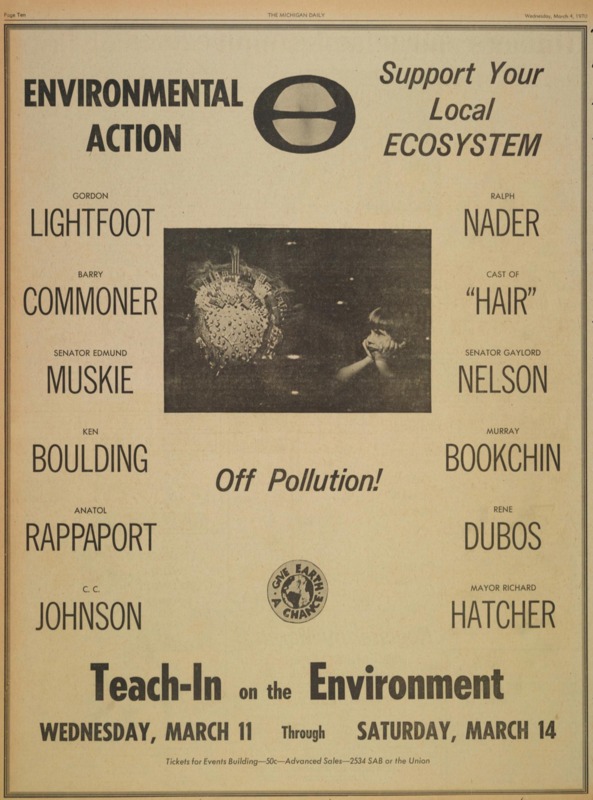 As a prominent environmentalist, who believed the environmental crisis to the hardest war ever fought by mankind, Gaylord Nelson spoke at ENACT's Teach-In at the University of Michigan on March 11, 1970. At the rally, he said, "the battle to restore a proper relationship between man and his environment, between man and other living creatures will require a long, sustained, political, moral, ethical and financial commitment far beyond any effort ever made before." Nelson was aware of the social and political issues with promoting the environment in a time of social unrest and war. Therefore, in his speeches, he tried to establish a sense of community and unity.

However, the relationship between environmental activists and Anti-Vietnam War protesters was complex and not always cordial. When Gaylord Nelson delivered his speech, his war metaphor angered some of his audience. In the Michigan Daily, James Shapiro dissented by saying "maybe we are here because some people want us to forget that there is a criminal war going on in Vietnam...," vocalizing the common belief that the environmental movement was a strategic distraction from the war in Vietnam.  While the environmental activist movement was drawing the attention of many of the same activists that were challenging the war, the organizers of the movement were trying to use the momentum of the Vietnam and Laos protests to jump-start their movement. Organizers, such as Dennis Hayes and Barbara Reid, wanted the two movements to work together hand in hand to change the world and to work together to "restore a proper relationship between man and his environment, between man and other living creatures."

By 1970, Gaylord Nelson had been traveling around the country for several years delivering speeches about ecology to college campuses and civic leaders. The day before the first Earth Day, Nelson spoke to a full auditorium at Milwaukee Technical College, delivering a modified version of the speech that he had made in Ann Arbor a little over a month earlier. In his speech, he commended college campuses for being so engaged with the issue of ecology. “I don’t think there is any other issue viewed in its broadest sense which is as critical for mankind as the issue of the quality of the environment in which we live… you hear the word ecology… it is concerned with the total ecosystem, not just how we dispose of tin cans, bottles, and our garbage.” 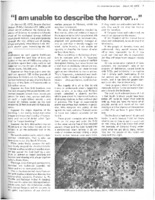 Gaylord Nelson was also fervently committed to opposing US involvement in Vietnam. Like many environmentalists, he cited the ecological damage that the prolonged conflict was causing as a reason to reevaluate our position. In 1972, he introduced a bill to the house which would authorize a full-scale study of the ecological ramifications of the Vietnam War. Activists had long been concerned with Agent Orange, and defoliation projects, as well as the ecological impact of the intense bombing campaigns that occurred. While scorched-earth tactics had been used in war before, the new technology of the modern era meant that the scorching was considerably more permanent. Nelson testified before Congress that the war had been "waged against the land as much as against the people." 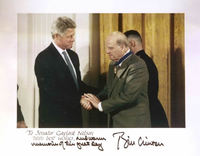 In 1980, Nelson was defeated in the race for his fourth Senate seat by Republican Bob Kasten. He was then hired as a counselor for the Wilderness Society, where he worked for the remainder of his life. In 1995, he received a Congressional Medal of Freedom from President Bill Clinton for his decades of service to the environment. On July 3, 2005, Nelson suffered cardiovascular failure and passed away; he was 89 years old at the time of his death. Nelson's conservation efforts were the highlight of his career and his life, and his legacy survives him. His devotion to the environment was the primary focus of his New York Times obituary which said that Nelson was an early and ardent environmental leader. At his Medal of Freedom ceremony, President Clinton said "[Nelson] inspired us to remember that the stewardship of our natural resources is the stewardship of the American dream."