On January 17th, 2001, the University announced it had reached an agreement with Nike on a 7-year, $25 million contract with Nike.  According to the contract, Nike was to provide uniforms for all varsity sports, along with a $1.2 million payment for the right to license university apparel. Unlike any other previous contract with Nike and a university, Nike was required to adopt the labor standards from the Collegiate Licensing Corporation’s (CLC), which included wage standards for workers, new monitoring principles, and ending child labor in factories that do business with Nike. Further, the University of Michigan reserved the right to terminate the contract if Nike violated those protections and did not work to fix them to the university's satisfaction. 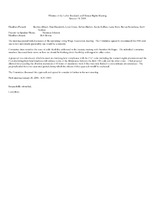 However, many students and anti-sweatshop activists charged the university with watering down protections for workers. In January 2001, the President's Committee on Labor Standards and Human rights was developing new language for University of Michigan apparel contracts that included protections for workers beyond the CLC's code. The main difference between the two was on how to limit work hours for Nike factories. Both codes nominally restricted workers to 60 hours a week, but the CLC’s code provided for exemptions in “extraordinary circumstances” which activists believed would allow employers to regularly ignore the 60 hour limit. The university approved the contract the day before the committee voted 7-2 to adopt this new language into all future contracts, protecting the Nike contract from falling under the stronger Michigan code of conduct.

Almost as soon as the contract was signed, SOLE took action to make President Bollinger terminate the university’s association with Nike. While students activist had long opposed the university’s relationship the global clothing giant, the contract seemed especially heinous in the face of the ongoing Kukdong labor dispute, where students claimed a Nike affiliated factory used the police to attack over 800 factory workers on strike. On January 18, 2001 20 members of SOLE, the Graduate Employees Organization, and the Black Student Union marched into President Bollinger’s office and demonstrated for a half hour. Students called for the University to enforce the provision in the newly signed contract that allowed the University to end the agreement if Nike did not address a major labor rights violation in 30 days. While President Bollinger was not in his office for the protest, the publicity that SOLE members earned brought them support from other actors on campus, like an MSA resolution in support of the striking workers at Kukdong.

The President’s Committee was supposed to institutionalize an anti-sweatshop activism on campus. However, students felt the administration was blatantly working around the committee by announcing the Nike Contract days before the committee instituted new protective language to be inserted in all future contracts. They had tried going throu

gh established channels to bring their concerns to the university, but after being ignored the students shifted their strategy to direct action tactics. While the university continued to do business with Nike, SOLE brought a new awareness on Nike to campus, and the University kept a careful eye on Nike's worker relations. 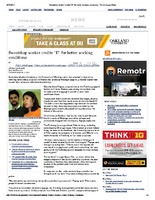 On December 3, 2001 SOLE invited Marcela Muoz Tepepa, a seamstress from the Kukdong factory, to talk about the changes at the factory since the strike and Michigan’s new contract with Nike. According to a Michigan daily Article from that time Mrs. Tepepa said, “Without the dialogue at the University of Michigan it would’ve been impossible to win the struggle… Management knows that it can’t yell at workers because the workers have a union.” Workers credited the University of Michigan for putting public pressure onto Nike that forced them to make major concessions to workers. Workers involved in the strikewere allowed back on the job, and they won the right to form an independent union free from government control that could bargain for higher wages, better hours, and increased protections against sexual harrassment in the workplace.