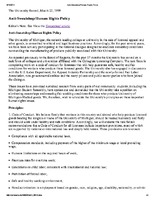 "Code of Conduct" released by President

The new code of conduct also included the appointment of the existing president’s advisory committee as a standing committee, which would be known as the President’s Committee on Labor Standards and Human Rights. The committee included faculty, staff and students who would meet monthly--at least one SOLE member served as a student representative on the committee until 2010. The student members were to consult with the Michigan Student Assembly, or MSA, and the faculty consulted directly with both the Senate Advisory Committee on University affairs as well as with the Academic Program Group. These advisory committees were then to advise the President’s committee on sweatshop issues which included the code of conduct, the monitoring system, licenses, and other informational studies. At the time of the appointment, the committee was charged with releasing a report on labor issues at Michigan within a year, which SOLE hoped would include several recommendations they had not won during the sit-in negotiations.

The permanent appointment of the Committee on Labor Standards and Human Rights was both a victory and a setback for SOLE. The establishment of the standing committee ensured that a measure of oversight would continue to exist over university licensees if and when SOLE disintegrated, but the work of the committee often took the wind out of SOLE’s sails. The university no longer relied on SOLE to act as an oversight body and when SOLE did take issue with a university policy they were usually redirected back to the bureaucratic committee. Working with the committee often proved frustrating for SOLE members who championed direct action. Instead of pressuring the university to adopt any policy, the committee engaged in lengthy debates over the merits of each policy and made more conservative recommendations to the president than SOLE would have liked. Leigh Wedenoja, a SOLE member and the student representative on the committee for the 2008-09 school year, explains SOLE's opinion of the committee after several years of attempted cooperation, "We mostly saw the committee as an obstruction. Not really an ally or opponent but more of a time sink of endless bureaucracy and waiting." 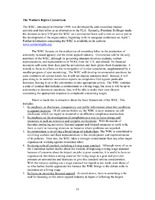 The committee debates the FLA and WRC

The first major conflict between SOLE and the committee came over the issue of the Worker Rights Consortium. Since its creation in 1999, the Fair Labor Association (FLA) was met with strong criticism from anti-sweatshop activists. The Association’s refusal to advocate for a living wage for factory workers, to provide full disclosure of factory locations, and to appoint independent, non-FLA associated factory monitors proved to be major sticking points, and furthered a perception that the FLA was “Nike-backed.” Anti-sweatshop activists, student activists in particular, began to imagine an alternative organization--which would become the Worker Rights Consortium (WRC) in 2000. USAS chapters around the country began petitioning their universities to drop their membership in the FLA in favor of the WRC. Brown University, Loyola University New Orleans, Haverford College, Bard College, and Oberlin College had joined the WRC by February, but Big Ten schools, with more significant licensing capabilities, were conspicuously absent. SOLE students at the University of Michigan aimed to rectify this and sent a proposal to recommend membership in the WRC to the Committee on Labor Standards and Human Rights immediately after its creation. The committee’s recommendation on the WRC should have been included in its inaugural report due early in 2000, however the committee repeatedly postponed the vote due to strong internal divisions. The committee’s inaction prompted SOLE to take action again.