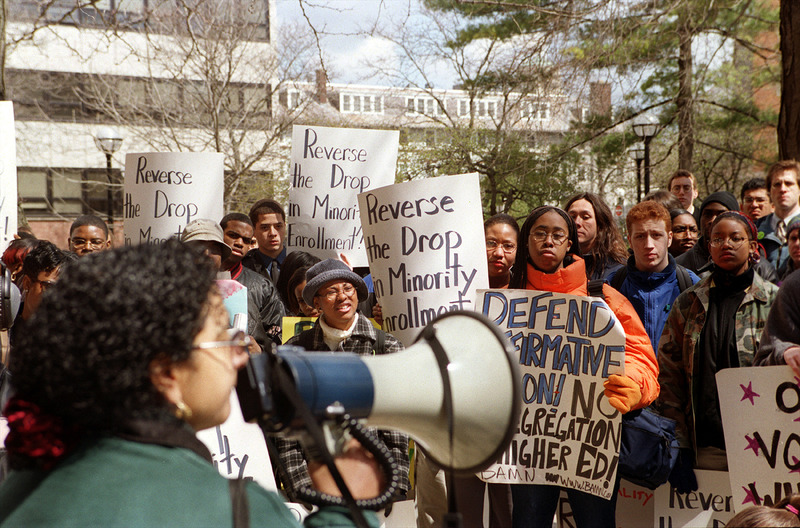 Leading into 1997, the affirmative action issue was one that began to dominate discussion and debate on campus. Two affirmative action cases created a “heightened sense politically on campus” as described by SOLE Co-Founder, Peter Romer-Friedman. Since the university was in the spotlight under lawsuit for its affirmative action policies, “students were forced to pick a side” and “created battlelines on campus”. This also introduced concerns about the leadership on campus and what the right direction was. Peter Romer-Friedman gives a great insight on the campus climate during this time in his 2015 interview with our team. The Michiganensian, the official campus yearbook, provided extensive coverage of the affirmative action movement and debate on campus. The publication, which only selects the most prominent topics to be included, proved the significance of the movement by covering it both in 2001 and 2003, when the issue finally reached the Supreme Court. 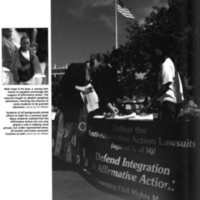 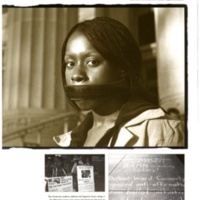 In June 2003, two major Supreme Court level cases were in direct association with the affirmative action standard upheld by the University of Michigan. The first case was between Barbara Grutter and President Lee Bollinger. The lawsuit directly involved the Law school and the affirmative action policies it practiced. In this case, Barbara Grutter, who was a white Michigan resident with a 3.8 GPA and a 161 LSAT score, applied to the University of Michigan’s Law School in 1997 and was denied admission. Grutter claimed in the case that the Law School denied her because of the racial preferences that gave certain applicants from different minority groups a higher advantage an opportunity for admission as opposed to similarly qualified applicants of disfavored racial groups.

The second June 2003 case was involved two Michigan applicants, Jennifer Gratz and Patrick Hamacher. This lawsuit directly involved the school of Literature, Sciences and the Arts. In this case two Michigan applicants Jennifer Gratz, a white Michigan resident, who applied to the University in the fall of 1995, and Patrick Hamacher, a white Michigan resident, who applied to the University in the fall of 1997. LS&A denied admission to both. In response and with help from the Center for Individual Rights, a conservative anti-affirmative action organization, Gratz and Hamacher filed lawsuits against former President James Duderstadt and President Bollinger. Duderstadt was involved in this case because he was the President of the University during the time that Gratz applied in 1995. The issue in this case was related to the implemented point system for admission utilized by the University of Michigan’s Office of Undergraduate Admissions or OUA. The 150 point system measured many things including high school grades, standardized test scores, curriculum, high school quality, location, alumni relationships, involvement, leadership and race. In regards to race, the OUA, deemed African-Americans, Native-Americans and Hispanic citizens as minorities on campus. In the 150 point system, 100 points were necessary to guarantee admission to the University. Of those 100 points, 20 points were automatically added to the applications of those deemed a minority, while a perfect SAT score only added 12 points. Both Gratz and Hamacher claimed that this 20 point advantage the use of racial preferences in undergraduate admissions violated the Equal Protection Clause of the Fourteenth Amendment, Title VI of the Civil Rights Act of 1964.

During the time of the Supreme Court cases, Jackie Bray, a prominent SOLE leader, helped to organize a massive protest in which tons of students went to Washington, D.C. for the Supreme Court hearings. In an interview with a San Antonio newspaper on the scene, Bray elaborated on the purpose of the trip.

"Our university happens to be at the center of a very important national movement," said Jackie Bray, a 20-year-old history major at the school. "Our university would never be the same without affirmative action."

While the cases were still under review, President Bollinger told reporters “it would be a great pity if the court rolled back 40 years of progress in racial diversity”.

On June 23, 2003 the verdicts were determined for both of the cases. In the Grutter case, the Supreme Court determined that there was no violation of the Constitution’s Equal Protection Clause. The Law School conducted an individualized review of each applicant and race was not a factor that determined rejection or acceptance, but rather all of the factors that contributed to diversity were considered alongside race. Since the Law School only used narrowly tailored usage of race in admissions to further a belief that educational benefits that come from a racially diverse student body, the majority on the Supreme Court voted in favor of President Bollinger.

In the Gratz case, the verdict was very different. In contrast to the Law Schools narrowly margined usage of race in the admission process, the minority process in the LS&A admission process was not narrow enough. After a vote of 6 to 3 in favor of Gratz and Hamacher, the Supreme Court ruled the OUA predetermined 20 point allocation to minority students ensured that the diversity contributions of all applicants was unable to be individually assessed and thus deemed unconstitutional.

After the verdicts there was “no absolute victory for anyone, but celebrations could be heard from both sides”, as described by the 2003 issue of the Michiganensian.