The Problem of Sweatshops

At first glance, it should be simple to force large clothing sellers in the United States enforce basic standards their factories. In 2001 four retailers alone accounted for nearly two-thirds of the US retail sales, but this tells only part of the story. In actuality, the production of those goods occurred in factories all over the world, few of whom were directly owned by US businesses. Rather, retailers prefer to contract with independent factories that are almost impossible for human and labor rights groups to monitor. 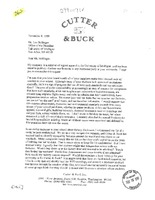 Retailers refuse to make these contracts public, as they claim they would lose their competitive edge if their competitors knew from where they sourced their goods. "We are in a very competitive industry, and Cutter & Buck has worked hard to identify top-quality factories from around the world and train them to our standards," wrote the CEO of an university apparel supplier to President Bollinger's office. "Many companies would like our list so that they could capitalize on the years of training that we've done." In this modern economy, companies stand to lose huge sums of money.

This structure also protects Western businesses from liability for the horrifying conditions in the garment factories. Without lying, they can plead ignorance about how the workers that create their goods are being treated. They can even deny responsibility, since it is not their factories that are the problem. "There's money to be made, there's costs to be saved, if you can string the production chain out and not have to know every step in the process," said Professor John Chamberlin, former chair of the University of Michigan's interim taskforce on sweatshops, during his interview for this project. "So that in some ways, I think that allows people sitting at the top of the corporations to go, 'I'm shocked!' Well they actually could be shocked."

This system also gives retailers an incredible flexibility in production. Is the retailer oversupplied? They can refuse to renew the contract without worrying about repercussions. Workers on strike to demand higher wages? Retailers can do their business with a different factory and move on. 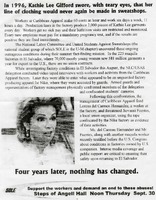 In the wake of several high profile incidents involving sweatshop conditions within the United States, many labor and human rights groups put increasing pressure on elected officials to tackle labor abuses at home and abroad. In the 1990s, journalists and labor groups, like Charles Kernaghan’s National Labor Committee, began travelling to Latin American and Southeast Asia on fact finding delegations--touring factories and interviewing workers--with the aim of exposing labor abuses. As a result of several well-publicized scandals uncovered by these activists, Americans began to develop an awareness of sweatshop issues. An El Monte, California garment factory attracted national attention in 1995 after a government raid revealed dozens of Thai immigrants working for little pay under oppressive conditions. Another scandal involved Kathie Lee Gifford, a co-host of the T.V. show Live with Regis and Kathie Lee, when the National Labor Committee reported on sweatshop abuses in factories manufacturing her clothing line in 1996. The media frenzy following the El Monte raid and the accusations that the Gifford’s clothing line relied on exploitative working conditions at Latin American factories brought the sweatshop issue into the homes of millions of Americans. Three years later, Students Organizing against Labor and Economic Equality (SOLE) evoked the Gifford scandal in the flyer seen at right. SOLE evidently believed that this event still resonated with the public and used Gifford’s fame to build support and membership for their upcoming rally. 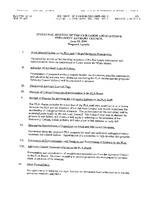 In 1996, President Bill Clinton convened the first session of the White House Apparel Industry Partnership (AIP), inviting representatives from all sides of the garment industry to create voluntary guidelines to protect workers around the world. Among the most notable attendees were garment manufacturers Nike, Rebook, and LL Bean, consumer advocates the National Consumer League and the Interfaith Center on Corporate Responsibility, and labor unions UNITE and the AFL-CIO. The AIP released its final 40 page report November 2, 1998, which became the charter document for the Fair Labor Association (FLA).

The agreement created a basic code of conduct for workers and set up Principles for Monitoring to enforce those provisions. The code of conduct prohibited child labor and forced labor, encouraged stronger safety standards, institute a non discrimination clause in worker's contracts, guaranteed a right to collectively bargain, and limited work to 48 hours a week plus 12 hours of overtime. The Principles of Monitoring encouraged participating corporations to establish clear guidelines to protect workers, to hire and train company monitors to self-enforce those guidelines, and to inform all levels of the company what constituted a violation of the code of conduct. There were also provisions for independent external monitors who would inspect at least 30 percent of the participating companies’ applicable facilities. Companies could enter into confidentiality agreements with these monitors to prevent company secrets from being leaked to the public.

President Clinton hailed the agreement as a massive success. He released a statement the day after the AIP's report was published, saying, "Today's agreement on fighting sweatshop practices is an historic step toward reducing sweatshop labor around the world and will give American consumers confidence that the clothes they buy are made under decent and humane working conditions. I applaud the apparel industry, labor unions, nongovernmental organizations, and consumer groups who answered the challenge I laid out 2 years ago to find cooperative ways to reduce sweatshop labor."

Despite the final results, the Apparel Industry Partnership (AIP) was fraught with disagreement and controversy. Two labor representatives, along with the Interfaith Center on Corporate Responsibility, pulled out of the AIP because they believed its provisions would not have a lasting effect in improving sweatshop conditions around the world. They claimed that the garment industry was responsible for writing the majority of the policy, and that labor’s concerns were not fully addressed. Still, the remaining members of the AIP hailed the agreement as a significant step forward, and its member companies began integrating the Code of Conduct and the Principles of Monitoring into their internal operations. 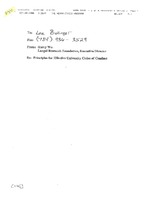 The Collegiate Licensing Company (CLC), which represented scores of universities including the University of Michigan, manages college apparel brands and bargains with garment manufactures. Under public pressure, the CLC adopted the FLA's code of conduct, requiring universities to adopt the same codes for their apparel as national chains.  On June 22, 1999, the FLA brought college campuses to the table by setting up a University Advisory Council, giving colleges a direct voice in the organization that creates and enforces industry wide standards.

However, students across the country objected to what they believed was an ineffective policy. Anti-sweatshop activists argued that the code relied on the countries themselves to set the regulations guiding workers’ rights and the minimum wage, and that realistically this would leave third world workers with limited protections. Furthermore, it would be impossible to meaningfully monitor manufacturers if multinational garment corporations refused to disclose what factories they contracted with, or even where they might be located. This last point was particularly important, as it acknowledges the complexities inherent in the modern global economy. Clothing manufacturers often do not own the factories that produce their goods, preferring to hire them as “contractors” to avoid legal liability. Without external monitors knowing the location of these factories, there is little chance that noncompliant companies would face any public repercussions for ignoring the AIP’s agreement.

Other professional anti-sweatshop activists began to target university Codes of Conduct to raise awareness for the movement and access the organizational resources of students. Harry Wu, a former sweatshop worker and executive director of the Laogi Research Foundation, authored an open letter to President Bollinger that echoed the arguments being made by SOLE and other sweatshop opponents, which is shown to the right. This letter was signed by Eric Dimbach of SOLE and other student organizers from campuses across America, who in turn partnered with groups such as the Laogi Research Foundation to increase their credibility and find new ways to tackles issues that students of which students have a limited firsthand knowledge.

Ross, Robert, “From antisweatshop to global justice to antiwar: How the new New Left is the same and different from the old New Left.” Journal of World-System Research 10, no. 1 (Winter 2004): 287-319