Russell Athletics and the FLA

While Russell Athletics was not the University of Michigan's largest apparel supplier, it was still a massive player in the sports equipment and apparel industry and held a contract with the university worth tens of thousands of dollars. The company was often celebrated for its strong record on human rights, and it regularly received high marks from the Fair Labor Association for their labor practices prior to 2007. By that year, the Russell Corporation became a “Participating Company” in the Fair Labor Association (FLA), a special designation that only 30 other companies managed to obtain. To achieve that status, a company needed to have at least $50 million in revenue and be fully “committed to bring[ing] their entire supply chain in to the FLA monitoring program and enforcing the FLA Workplace Code of Conduct.”  Under such a system, workers in Participating Companies would theoretically receive protection from the kind of labor abuses rampant in the apparel industry. 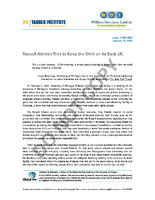 Despite Russell’s usually strong record regarding the human rights of its factory workers, the company started butting heads with organized labor starting in 2007. Just as global free trade meant more and more factories began to move to the country and other areas of Central America to keep labor costs low, labor organizers began to copy tactics of their international counterparts to win concessions from manufacturers. Just as many of its counterparts did, Russell Athletics began contracting with several factories in Honduras, where it could find cheap labor

In 2007, the company fired 145 workers from its Jerzees Choloma factory in Honduras, where workers had been attempting to organize a union. After receiving a complaint from workers, the WRC conducted an investigation of the firings and found that virtually all of them had supported collective bargaining rights at the factory. FLA sponsored their own investigation, which confirmed the WRC’s findings, without finding concrete proof that the workers were targeting for their activist work. In April 2008, Russell Athletics announced the complete closure of the Choloma plant, letting go of the remaining 151 workers. This irked most labor organizations, as they had pointed to these plants as evidence of the success of independent monitoring in improving working conditions.

Still, many schools were hesitant to cut ties with Russell Athletics over its dealings with just one factory, especially considering their previous record. It was in this atmosphere that workers at Russell Athletics’ Jerzees de Honduras (JDH) factory in Honduras began to demand higher wages. Workers claimed that they faced open hostility and threats from management as they sought to form a union, that they were required to meet unreasonable production quotas, and that their own government ignored their pleas for help.  The union struck a chord with workers who found themselves alienated and abused by apathetic management, and by 2009 over 750 of the factory’s 1,800 workers joined the union. The company offered workers a 3-cent hourly raise to solve the unrest, but workers rejected this as too little, too late. In the midst of this standoff, on January 31st 2009, Russell Athletics closed the JDH factory and fired all its workers. While this story mirrors almost exactly that of the Choloma plant, the large number of workers brought national attention to Russell Athletics. 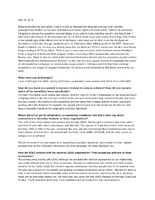 The President’s Committee on Labor Standards and Human Rights took up the Russell Athletics issue early in 2009, debating the university’s best course of action. The committee wrote several letters to the company highlighting the university’s concern, but it seemed as though more drastic action would be needed to prevent similar factory closures in the future. Already, a number of schools had ended their relationship with Russell, including Duke, Miami, and Rutgers, and the WRC was leading the charge.

Throughout this issue, the PCLSHR worked closely with independent monitoring groups. Working with the Davidson Institute, the President’s Committee issued a report trying to make sense of conflicting reports from the WRC and the FLA over the true reason for the plant closures in Honduras.  “[O]ne of the things that the committee did really well was take the WRC reports seriously and then contacted the company to talk about what appeared to be violations of their license. The [Russell Athletic] reps who spoke to us basically nailed their own coffin,” said former SOLE and student PCLSHR member Leigh Wedenoja in her email interview for this project. “They were dismissive, non-committal, one of them completely dodged a question that I asked and didn't really make an attempt to [answer it] until one of the other committee members (older and male and sounded older and male) pointed out that he hadn't answered it. After that call things moved pretty quickly.”

After they issued their report, the committee more or less unanimously agreed that Russell Athletics was guilty of violating the university’s labor standards (along with Russell’s own regulations), but their final decision hinged on what would most benefit the workers of Honduras.  In the end, they decided that Russell’s failure to end labor abuses after the 2008 closure of the Choloma plant meant that the company was likely to continue despite the work of independent monitoring organizations. The committee’s report stated, “[O]ne of the most troublesome aspects of Russell Corporation's actions regarding the Jerzees de Honduras plant is that they failed to apply lessons presumably learned from a previous similar encounter at this plant and another facility, Jerzees de Choloma… In the prior situation, Russell agreed to follow a series of steps regarding its treatment of workers, especially in communicating the company's commitment to free and open labor negotiations. Despite this agreement, the Committee concluded that Russell had followed virtually none of the expected steps when it came to dealing with workers at the Jerzees de Honduras factory.” On Feburary 23, 2009, the University of Michigan ended its contract with Russell Athletics on the recommendation of the President’s Committee on Labor Standards and Human Rights. The Workers’ Rights Consortium

SOLE responded very differently to the administration during the Russell Corporation episode than when fighting over the Designated Suppliers Program. In this case, the President’s Committee was an ally in their cause, and instead of launching large demonstrations, SOLE put an emphasis on education. Likely, SOLE felt that their current representation on the committee was influential enough that it was more beneficial to work within the system than against it. The organization instead brought two union organizers from the JDH factory in Honduras to campus to talk about the sweatshop crisis, both to build public support for the anti-sweatshop movement and to continue to apply pressure to the administration to follow through on its labor regulations. “When we came to this country we were shocked to find the prices students paid for this apparel,” said Moises Alvarado to the gathered University of Michigan students. “We only make 1,300 lemprias, which in U.S. dollars would be about $60 a week.”

Steven Greenhouse, "Michigan Is the Latest University to End a Licensing Deal With an Apparel Maker," New York Times, Febuary 23, 2009.

"Russell Athletic Tries to Keep the Shirt on Its Back (A),” William Davidson Institute at the University of Michigan, January 10, 2010. http://globalens.com/DocFiles/PDF/cases/inspection/GL1428826I.pdf