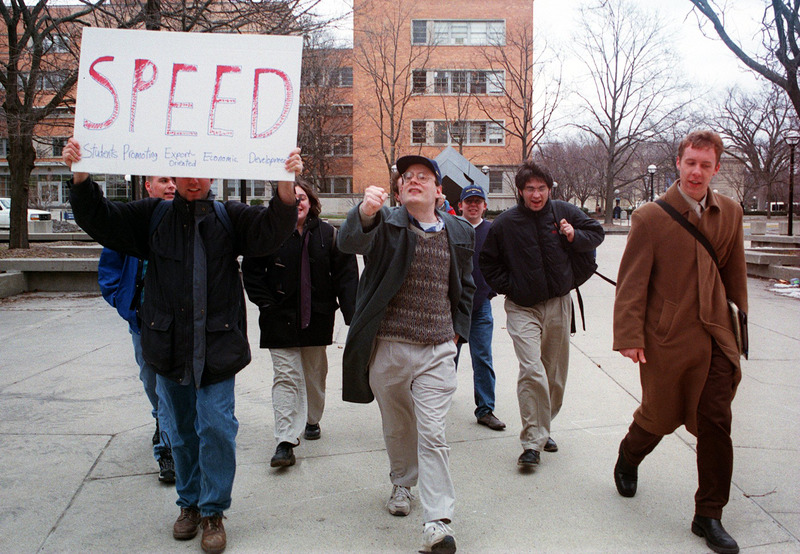 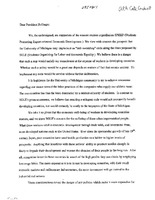 Letter sent by SPEED to Bollinger in 1999

Not all students on campus supported a strong code of conduct or the dramatic demonstrations undertaken by SOLE. On March 18, during the sit-in of Bollinger's office, a group of nine conservative-minded students launched their own demonstration at the other end of the Regent's Plaza. This was the first action of the newly formed Students Promoting Export-Oriented Economic Develoment (SPEED), a student organization that aimed to encourage economic growth in poorer countries by allowing sweatshop conditions to exist for Michigan apparal manufacturers. They sent President Bollinger an open letter signed by 17 students calling on the University to reject SOLE's demand for a living wage, which is pictured to the right.

"To insist that working conditions and hours in these plants, which are often quite poor by American standards, be immediately improved is to risk interfering with the process of developement which are only sustainable source of such improvements in the long run," wrote SPEED in their letter to President Bollinger. "Despite attempts of groups such as SOLE to vilify major Western corporations, it is clear that pouring vast quantitites of capital into developing nations cannot fail to have a beneficial effect." They did not believe that SOLE represented an "evil," but that their misguided attempts at instiuting a living wage would force companies to move their factories elsewhere, which would deprive third world workers of their primary source of income.

SPEED began as an offshoot of the College Libertarians on campus. Many of the 17 students who signed SPEEDs letter to Bollinger were also members of that organization, and the President of SPEED also served as the chair of the College Libertarians. A number of Business and Economics majors also joined the organization, as the message of unfettered capitalism resonated with their world view.

While the organization never had the same influence as SOLE, SPEED managed to have a consistent presence on campus in the early years of the anti-sweatshop movement. It dedicated most of its efforts to education, trying to prove to the student body how additional regulations would ultimately hurt workers in undeveloped countries. As pictured to the right, SPEED produced and handed out flyers against the living wage, and their president wrote an op-ed in the Michigan Review. They also invited Professor Richard Vedder of Ohio University, a well known proponent of free trade, to give a public talk on the importance of sweatshop labor in economic development. An estimated 50 students attended the event, which was co-sponsored by the College Libertarians. 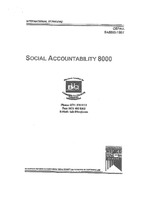 endorsed by the ACIT

While SPEED took the lead in visibly opposing the anti-sweatshop movement, other players dedicated their work to furthering the acedemic arguments against regulation of the garment industry. In 2000, a number of professors from the University of Michigan and elsewhere launched the Academic Consortium on International Trade (ACIT) to publicize the benefits of free trade for developing countries. 200 Professors from around the country gathered to oppose the efforts of students and scholars to win a living wage, factory location disclosure, and onerus .

These academics advised university administrators to abandon both the FLA and WRC in favor of a monitoring organization called the Council on Economic Priorities Accreditation Agency (CEPAA). CEPAA’s Social Accountability Standard required that “member corporations comply with national and other applicable laws and to respect the principles of workers’ rights…” ACIT cautioned that additional regulations would undo the good work already being done by multinational corporations that provide higher-than-average wages to workers in developing countries. They felt the best way to fight the more outrageous excesses of sweatshop factories was to make sure local and international laws were enforced.

ACIT did not have much of a ground game, and they spent most of their time trying to pursuade administration and other professors instead of students at the university. Despite their efforts, they could not change the university's course of action after student demonstrations ensured that school would join the WRC.

SOLE members did not take the existance of pro-free trade groups as a sign that many individuals on campus opposed the living wage campaign. Rather, they saw it as a validation of their influence in bringing the sweatshop issue to the forefront of the campus conversation. SOLE member Peter Romer-Friedman noted, "I actually think the fact that SPEED formed during our sit-in illustrated how well we penetrated the campus on this issue. That we had the success of getting so many people on our side that the small band of vocal conservatives felt like they needed to stand up for libertarian principles."