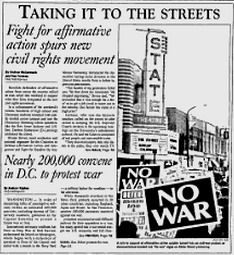 After the second sit-in in the LSA dean’s office, SOLE faded from the campus spotlight as other national news stories overshadowed the sweatshop issue. At the University of Michigan, students began organizing around two major issues--affirmative action and the war in Iraq. SOLE members became involved in both of these campaigns and the organization firmly planted themselves as anti-war and pro-affirmative action. Although affirmative action had been an issue on campus since the late 90s when the lawsuits were first filed against the university, the topic gained new prominence in 2003 when the supreme court heard the cases and again in 2006 when the state voted on an affirmative action referendum. A robust anti-war effort also started on the Michigan campus in the early 2000s as the U.S. committed increasing troops and resources to combating Saddam Hussein, culminating in the March 2003 invasion of Iraq. SOLE also continued to work on labor issues, but with a more domestic focus. After the 2000 sit-in SOLE worked with the Graduate Employees Union to build undergraduate support during their contract negotiations and brought attention to the union busting practices at a New Era hat factory in New York that manufactured university apparel.

Although SOLE did work on labor issues during this time, the President’s Committee on Labor Standards and Human Rights had essentially taken this role over from SOLE. After the 2000 sit-in, the committee enforced the code of conduct and made contract termination recommendations to the president, oversaw the Nike fallout and contract renewal in 2001, inserted an updated code of conduct into all new apparel contracts, decided to join the FLA, and monitored companies including Lands Ends, Guildan Activewear, Coca-Cola, and Cintas. In many ways this was a victory for SOLE who had directly contributed to the establishment of a permanent oversight group, but the committee’s perspective often differed from SOLE’s and worked at a slower pace than the students would like.