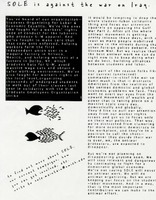 The September 11, 2001 attacks and the Bush administration’s movement toward war in Iraq in 2003 galvanized antiwar activism at the University of Michigan and led to tension about priorities for the campus left.  SOLE denounced the war in Iraq as a “foreign policy debacle” similar to the Vietnam War but insisted that “building alliances between students and labor” furthered the cause of the antiwar movement.  In this flyer, "SOLE is Against the War on Iraq," SOLE mentions previous key events in which they were involved, including: helping workers form the first independent union in a factory in Atlixco (New Mexico State University Report), helping workers in Derby, NY who produced hats for UM avoid massive wage cuts and obtain a safer working environment, and locally organized thousands of undergrad students to walk out of their classes in solidarity with the UM Graduate Employees Organization's strike in 1999.

The Alliance for Peace and Justice

As a Sophomore, prominent SOLE leader Jackie Bray, founded the Alliance for Peace and Justice alongside Monique Luse, a Residential College Junior and several others in 2001.

Bray also publicized many of the ideals of the organization which included a belief that the United States should make a statement in response to the 9/11 attacks, but that peace would be a bigger statement than war as mentioned in a September 2001 article from the Michigan Daily. Bray was also known to be a different type of peace activist. In a October 2001 article from the Michigan Daily it is stated that Bray was in fact not “the common conception of a spineless "wishy-washy/why can't we all just get along" type of activist.” In a WJR AM 760 debate on the David Neuman show, Bray clearly identified how she was a different type of peace activist by calling for some type of international response rather than sitting back and doing nothing, as well as emphasizing the point that Americans didn’t deserve the attacks on 9/11, which was a common misconception for peace activists. By also bringing up ideology that wasn’t commonly heard on the mainstream news coverage such as “recogniz[ing] that Osama bin Laden wants the U.S. to attack to destabilize the Muslim world and therefore spark a "clash of civilizations"” and “urg[ing] caution as we enter the new war, because U.S. actions in the near future could initiate a very ugly conflict between the West and the Muslim world.”, Bray brought alot of attention to The Alliance for Peace and Justice.

SOLE also claims in this flyer a number of reasons why focusing solely on anti-war policies is a distraction from the bigger picture and they include: the potential war was described as a distraction from the realities of the series domestic and global economic problems, how the war averted eyes from the upward movement of wealth and power, how the war took attention away from workers rights and issues and how the result of exclusive anti-war focus is that Americans would be distracted from fighting for more economic democracy in the workplace.

In a 2001 New York Times interview, Jackie Bray elaborated on SOLE position on the war in Iraq.

''There are institutions in place that can bring justice in a way that is not retaliation,'' said Jackie Bray, 19, a sophomore from Ridgewood, N.J. ''The idea of wiping out every terrorist across the world is very appealing, but it's not very realistic.''

The fish in this flyer is a theme that SOLE incorporated in a number of their handouts. It represents the smaller individuals coming together to form a formidable force that can effectively face an adversary. The bigger takeaway is that SOLE claims to do antiwar organizing as defined by the organization and this also shows another focus shift of the organization.