In 2001, New Era Cap Company a Derby, New York based apparel manufacturer, was under fire from many worker’s organizations. The Michigan Daily reported, “New Era cap company outsources work to sweatshops in Bangladesh where workers are forced to endure extended periods of overtime in violation of Bangladeshi law, drink unsanitary water and suffer abuse from supervisors.” New Era was also found to be in violation of the Workers Rights Consortium at the local Derby factory, where the WRC found that the factory had “a disproportionately high rate of musculoskeletal ailments.”

As a direct result to the Workers Rights Consortium violations, in November of 2001, Duke University decided not to renew its manufacturing contract with New Era due to “the company’s questionable labor practices.” as quoted from a November 2001 issue of the Michigan Daily.The New Era Cap Company also received much of the protest from the Communications Workers of America union.

When CWA union workers went on strike against New Era Cap Company in Derby, New York, they were threatened with a permanent factory shut down and move overseas. New Era Cap Company actively tried to “punish workers by transferring jobs to non-unionized factories and approving unilateral pay cuts.” However, community partners rallied together to support the union, including SLAP. SLAP was the Student Labor Action Project formed by Jobs with Justice in 1999. Recognizing the need for student activism due to New Era contracts with universities, SLAP connected the CWA with USAS and built a strategy to incorporate students. SLAP and USAS mobilized hundreds of students across the country to protest against New Era and show solidarity with workers. A year later, the CWA won a fair contract and kept the factory open. 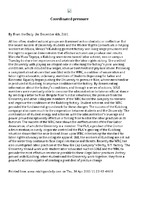 SOLE is reccommended by the Michigan Daily to the University to confront the New Era contract.

Locally, SOLE was in the spotlight as one of the main resisting forces against New Era. A December 2001 article of the Michigan Daily urged the University of Michigan to work with the WRC and directly with SOLE to effectively protest the hat maker, prophesying the future success of SOLE’s work with the University to a past one involving a textile factory in Mexico. “The University should work with student labor advocated such as SOLE and the WRC to provide the most effective resistance possible to these illegal labor practices. As they proved with Nike's Kukdong plant, when students and the University work together, they form a powerful alliance capable of creating a great deal of positive change.”

In February 2002, SOLE organized an event with USAS and created a mini golf course to raise awareness of the situation in Derby, NY at New Era and to “gather support from students for their campaign to terminate a contract between the University and New Era until the company proves it is operating under the University's Code of Conduct for Labor.” Larry Root, the President’s Committee for Labor Standards and Human Rights Chair, told the Michigan Daily in February of 2002  that while most colleges and universities had terminated their contracts with New Era, most did so by not extending the contracts after they expired. The contract between the University of Michigan and New Era would not expire until October, so the Committee was in a very unique position. Root would add, ““One of the things that we"ve been exploring is what are the legal options when we started looking at what is legally possible for us, it sort of slowed us down," He added that the committee is not satisfied by the lack of proof New Era has provided that it is following the university's Code of Conduct.” 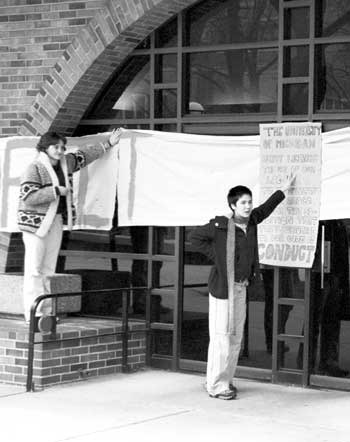 SOLE members wrap the Fleming Building in New Era contract forcing administrators to 'cut it' before entering the building.

On April 5, 2002, the National Student-Labor Day of Action, SOLE protested the New Era contract with the University of Michigan at the Fleming building. In protest, members of SOLE wrapped a 400 foot-long banner around the building “that asked the University to put "people before profit, cut the New Era contract," and enforce University principles because "our Code of Conduct means nothing if we don't enforce it.", as described by the April article of the Michigan Daily. SOLE members like Residential College Junior, Aaron Goodman viewed this protest as success because he believed that Interim President B. Joseph White understood their message.

The Committee Votes to End the Contract

By April 14, 2002, the President’s Committee on Labor Standards and Human Rights voted to immediately begin the process of ending the contract with the New Era Cap Company. Larry Root released the announcement through an email to Interim President B. Joseph White which stated, "The committee ... recommends that the University immediately institute procedures to cut the licensing relationship with New Era Cap Company and that reinstatement or renewal of the license not be considered unless New Era adequately demonstrates that it is in conformance with the University's Code of Conduct (for University Licenses)." SOLE members told the Michigan Daily that they believed the committee made the right decision, “given the WRC's stated allegations - which include a failure of New Era "to protect workers adequately from [musculoskeletal] disorders," a high number of avoidable injuries due to needle punctures and inadequate measures taken by the company to protect workers from blood contamination - and the company's lack of response to those allegations.” That same year, the CWA won a fair contract and kept the factory open. 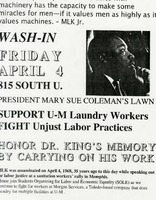 SOLE holds a "Wash-In" on 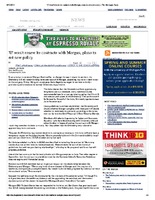 In October 2003, workers from Morgan Linen Services approached SOLE for help in their contract negotiations. Morgan Linen, based in Toldeo, Ohio, provided laundry services for the university’s hotel at the Ross School of Business, the Lawyers Club, and the Martha Cook dorm. The laundry workers’ contract had expired in March and since then they had been entangled in bitter contract negotiations with the company through their union, Union of Needletrades Industrial and Textile Employees (UNITE!). The company refused to budge on pay raises, sick leave, and health insurance costs and instead attempted to decertify the union, threatened to cut seniority rights, and physically intimidated workers. In approaching SOLE, the workers hoped that the University of Michigan would pressure the company to meet their demands.

SOLE met with the university administration repeatedly to discuss this issue, but because Morgan was not an apparel licensee, they were not subject to the WRC’s standards. Although Louis Green, the head of ethical purchasing for the university, indicated that Morgan was out of line with the university’s values, there was no official guideline for the university to follow in reviewing these types of contracts. As a solution, President Coleman announced a taskforce in April, comprised of both faculty and students, to develop and recommend a new purchasing policy for the university. Coleman also sent a letter to Morgan Services indicating her intention not to renew contracts with them in the future. Julie Peterson, a university spokeswoman, credited SOLE with these achievements, “The strong letter of non-renewal to Morgan and the creation of a taskforce are important accomplishments that would not have been proposed by Coleman without the students’ voices.” 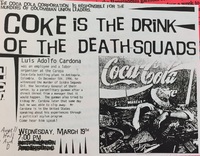 In the struggle for workers’ rights, SOLE’s brought attention to another case of suppliers of the University of Michigan, namely Coca-Cola.  While SOLE had been involved with anti-Coke organizing since 2003, the cause became one of the foremost issues on campus by 2005. In February of that year, SOLE joined with 11 other student organizations, including Amnesty International, Environmental Justice, and Tzadek, to form the Killer-Coke coalition. Student activists claimed that the company had violated a number of labor and environmental laws in its factories in Columbia and India. This effort was part of a broader nation-wide Killer Coke Campaign that sought to use economic pressure to get Coca Cola to improve their labor practices.

SOLE adapted many of the tactics used in earlier campaigns for the Killer Coke Coalition.  Just as SOLE brought sweatshop workers from El Salvador to campus in 1999 to talk about the evils of the apparel industry, they invited Columbian labor leader Luis Cardona to campus on March 19, 2003, to educate students on how Coca Cola used paramilitary groups in Latin America to intimidate unions and maintain a submissive workforce. The Killer-Coke Coalition also worked to gain the support of the Michigan Student Assembly, which passed a resolution in endorsing the campaign. This further legitimized the movement, as they it proved they had support beyond the usual core of serious activists, and it forced administration to respond to the concerns raised by the campaign. After SOLE filed an official claim against Coca Cola to suspend their contract with the university with the Dispute Review Board, on June 20 2005 the administration put the company on probation and set a strict timeline for reforms that Coca Cola was required to meet or else its contract would be suspended. 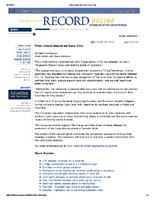 The Dispute Review Board notes the

While this campaign differed in subject to SOLE’s usual efforts, the tactics involved had barely changed since 1999. It was an encouraging sign for activists on campus, however, that another campus wide reform movement managed to adopt strategies’ pioneered by SOLE that had achieved concrete gains in the past. They proved to be effective in this case as well, as Coke did take steps to shape up in response to the university’s actions. A 2008 Dispute Review Board investigation found that Coca Cola had addressed a number of serious complaints brought against it by students and improved working conditions across the board. An official involved with the investigation noted that "among the conclusions was recognition of The Coca­Cola Company's efforts to prohibit child labor, ensure equality and non­discrimination, and provide health and safety programs.”

This era, from 2002-2006, represents a departure from the drama of the sit ins and demonstrations of the early anti-sweatshop movement. In this period, students entered into an uneasy alliance with administrators, where demonstrations were no longer meant to disrupt campus life but instead to bring new issues to the attention of the President’s Committee on Labor Standards and Human Rights could act upon. This is not to say that the two sides did not come into conflict. To students, the university was constantly dragging its feet while reviewing contracts with companies that abused their workers. To administrators, activists demanded action at a pace that did not allow decisions to be made through proper channels. This kind of relationship could function only if students believed that the administration had the ability, will, and flexibility. While these new struggles might not have dominated the news and the rest of the student body’s attention like joining the WRC or implementing a Code of Conduct, a dedicated group of activists managed to make huge strides in a relatively peaceful environment. However, SOLE’s tactics would change as this alliance broke down, and new issues such as the DSP brought students and administrators into direct confrontation.