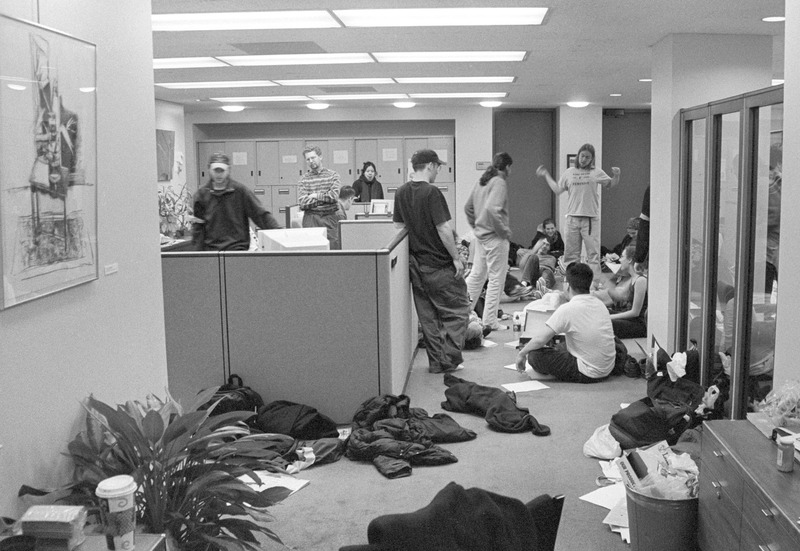 In March 1999, SOLE students occupied President Lee Bollinger's office for 51 hours to demand revisions to the school’s Code of Conduct, drawing inspiration from the Duke protests a month prior.

In the early months of 1999, SOLE and other USAS Chapters decided that if the universities had failed to join the Worker’s Rights Consortium, or WRC, there would be some sort of civil disobedience, or a sit-in. According to a 2015 interview with Peter Romer-Friedman, many SOLE members did not believe that it was going to come down to them occupying the President’s office. Preceding the 1999 Bollinger sit-in, SOLE had conducted meetings with high-level University of Michigan officials such as Keith Molin, of the Athletic Department, Tom Gauss, the Athletic Director. Romer-Friedman recollects that there was much support from university officials such as Keith Molin, who wanted to help the organization but needed SOLE to take action. SOLE also met with Bollinger around the time of the Duke sit-in and after some hesitancy from Bollinger to meet with the organization, SOLE demanded that Bollinger talk with them or they wouldn’t leave. As a result of the demands, Bollinger took the SOLE members down to the Board of Regents room, sat them in the Regents chairs, and discussed the sweatshop issues and policies with them. In the meeting, Bollinger expressed his awareness of the sweatshop issue, and also introduced to the group Marvin Krislov, his right hand man, of the General Counsel’s Office. Krislov was appointed by Bollinger to negotiate with SOLE directly and to work on sweatshop policy.

As SOLE continued to work things out with the Marvin Krislov, over time SOLE members realized that the General Counsel was not going to implement anything unless SOLE took direct action. Duke University’s anti sweatshop organization had conducted a sit-in in February, and it had great national media coverage and brought a lot of attention to the sweatshop issue. During early 1999, SOLE began to build up its media contacts and built up regional exposure. One of the key connections was with New York Times reporter, Steven Greenhouse, who interviewed a couple of the members and agreed to send in a photographer to cover the sit-in if SOLE agreed to conduct it. SOLE then began to hint to the media that they were going to conduct a sit-in and presented an ultimatum to the university that if the demands of SOLE were not met by a certain date, a form of “direct civil disobedience” would be conducted by members of the organization, as described by Romer-Friedman.

After the university failed to agree to SOLE’s demands, members began to plan out the logistics of the sit in. Understanding that the sit-in was to take place in the Fleming Building, SOLE members realized that this would be no easy task. The University of Michigan designed the Fleming Building, where the president’s office is located, to be “protester resistant” after serious protests in the 1960s. With only two outside entrances, both of which with an unknown probability for being open and locked doors that give access to the stairwell, the task of occupying the President’s office was not an easy one.

SOLE Co-Founder, Peter Romer-Friedman, discusses the 'No Sweat 30' and other internal planning.

For SOLE, another part of the planning process involved figuring out how many people to send into the building from the organization. This number would be 30, a group of volunteers who would come to be known by SOLE as the “No Sweat 30”. The No Sweat 30 committed to staying in the building for the long haul, which meant they would stay in the building until they reached an agreement or were arrested and escorted from the building. SOLE members also were unaware how long the sit-in would take, so they planned for different things like food and provisions, lawyers for legal counsel, and other elements crucial for success.

On March 17, 1999, SOLE occupied President Bollinger's’ office. There was very little direct interaction with other people during the sit-in. The building officials refused to let people come and go; once SOLE was in the building, the demonstrators didn’t leave until 3 days later. Although SOLE was stuck inside, the administration allowed the media to enter and exit as they pleased and this was a main form of communication with the outside. Another medium of communication was through the form of cell phones. Peter Romer-Friedman remembered that cell phones were new and very large and how they used them to communicate with SOLE members on the outside, who were organizing protests outside supporting the sit-in. Faculty and Students sent in food for the SOLE members, and there was even support from the UAW who “made quasi physical threats” to the University. Participants in the Detroit Free Press and News Lockout, the Graduate Employees Organization, and friends of SOLE members were all instrumental tools for rallying Michigan support for the sit-in.

During the sit-in SOLE members strategized tactics, had a non-alcoholic dance party, held icebreaker activities, talked to the media, was covered by TIME Magazine and most importantly negotiated with Lee Bollinger and the General Counsel. SOLE was engaged in negotiations with President Bollinger and the General counsel within hours of occupying the building. Romer-Friedman remembers the meetings as being very productive and believed that the university leaders took SOLE very seriously. The main negotiation was a commitment to the living wage concept and also a commitment to demanding the disclosure of factory and sweatshop locations. The prevailing wage was the current standard during the ‘99 sit-in and it meant that the most common wage in an industry was the one that set the wage for all. For sweatshops, a low wage industry, the prevailing wage would have been minimum wage. 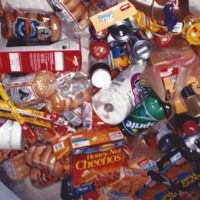 SOLE's supplies for the sit-in 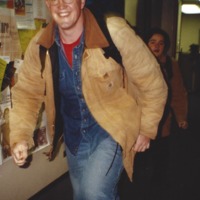 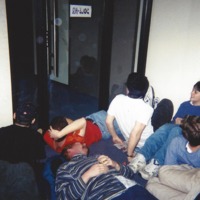 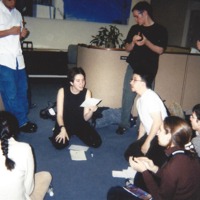 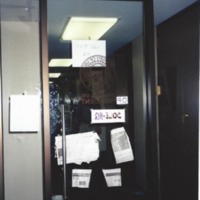 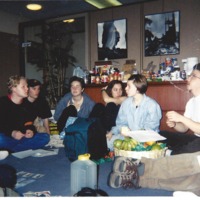 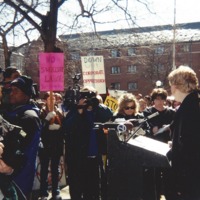 Press conference after the sit-in 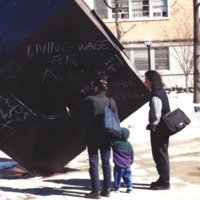 Anti-Sweatshop slogans on the Cube

TIME Magazine concluded “After a 51-hour sit-in, [SOLE] emerged with a pledge by administrators to improve the conditions of workers who stitch Michigan apparel.”, the sit-in was a victory.

Peter Romer-Friedman believes that the University did agree and committed to the demands of SOLE even though the General Counsel did not sign any official documents. After the success of these negotiations, the President Bollinger gave an announcement describing their plans in a very vague language. SOLE was left to decide to either stay to fight for more definitive language or leave and consider the Universities announcement a victory and “live to fight another day”. SOLE decided to call the sit-in negotiations a victory and left the President’s office after 51 hours of occupation. The living wage concept was placed into the contract as a direct result and eventually would be in the Nike supply contract. Peter Romer-Friedman also recollects that former SOLE members and himself viewed President Bollinger as very supportive of the organization during the negotiations and during the sit-in. Although there were moments where Bollinger’s actions weren’t as bold as members of SOLE would have liked them to be, he was a man who was greatly interested in the issue of sweatshops and with a little pushing from SOLE helped the university to move in an sweatfree direction. 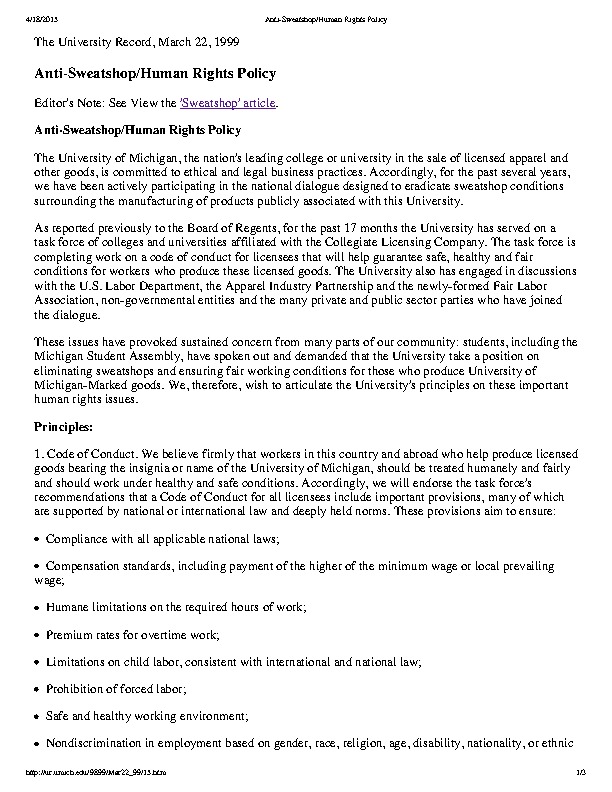 The code of conduct released after the 1999 sit-in.

The new code of conduct applied to not only all new licensing contracts, but also to current contracts up for renewal. In a quote from the Michigan Record, “President Lee C. Bollinger said the far-reaching, comprehensive code will serve as "a national model for ensuring ethical business practices, particularly in our provision for full disclosure of the location of manufacturing facilities. Disclosure of locations will enable monitoring of the facilities to ensure compliance with the code."’